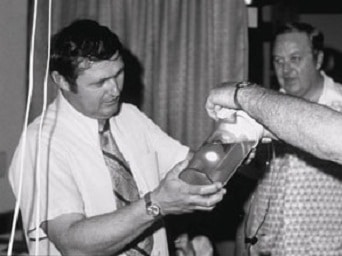 It has been in the news for past several years and each time I read about this ‘amazing weapon’ I am reminded that we have lived under this Money slavery for centuries.

U.S. Navy fires the railgun that can shoot a missile 100 miles at eight times the speed the sound for the 1,000th time

The story behind this story ranks among the greatest scams pulled on the world’s peoples, and I was accidentally in the middle of it starting in the 1970s.

My Motto back in the heyday of my Inventor’s-story career, was:   “It is better to be lucky than good!’ I have always been lucky this way. But despite a knack for putting unconnected pieces together, my “busy” routines saw that while I was directly involved, it often took time for the whole story to click in. It has clicked—pay attention.

Now I am positive. This is a clear example of what people get, and don’t get when a ‘finance cabal’ dominates the world. Today everybody is aware how ‘capitalism’ is a widespread phony scam promoted by banksters. Folks may be more aware, but they sure do not yet understand.

If clean, virtually free energy could be made available to every family unit, without the enslaving grid of wires and meters, what would it mean for Liberty and economy?

We can only wonder.  We can only imagine the pressure they have applied to keep the lid on this. Now they have let it out because hubris overrides caution.

Our human nature has been our own worst enemy, and I must admit that thoughts of possible riches infected me as well as many others back as   I learned, and wrote about the Ed Gray ‘Fuel-less’ EM motor.

Now for the whole story.

On July 1, 1973, a story appeared in the second most widely distributed Tabloid at America’s supermarket checkout counters; The headline blared off into the eyes and brains of countless subjects everywhere:

Although The Tattler was a ’scurrilous,’ sensationalist tabloid, the story and the bylined reporter were quite real. As the writer, I gained instant fame and prestige among a subset of our culture—the deluded individual inventor class.

There is nothing like these guys, and it’s not all good.

The Sorrentino brothers (Tattler owners) got so much response from this story they switched emphasis from celebrity pap to wild inventor claims, (the trend did not have the lasting power of Liz and Dick, or Jackie Onasis, but we had a good run.

The latest Navy Rail Gun story goes directly back to Ed Gray, and when we think it over carefully, we see the vastness of the money scam   (Think Military-Industrial complex and warmonger mentality.)

The one big thing the Navy Story does not touch is the Power supply for this amazing weapon.

Here is what The Tattler said:

His motors could: Power every auto, train, truck, boat and plane that moves in this land Perpetually.   (well, we were a tabloid, not Popular Mechanics)

“and, do it all without creating a single iota of pollution.”

I have since learned that the demonstrations I witnessed, were more of an investor scam, and while what I saw was real, it was not Gray’s invention, but one he had ’lifted’ from another inventor, with more knowledge and scruples. If Gray had told the truth, the world might have had the technology, Now we may never know.

The Picture on this page shows me sticking my hand fearlessly into a water-filled tube containing a lighted bulb on bare wires, without shocking. This part of Ed’s dog and pony show stunned engineers and other experts, but I was too technically stupid to be wary.

The man in the background is my late friend C.V. Wood Jr., who was president of McCullough Oil, and The American Stock exchange. I brought Woody with me for the demonsrations. Woody had some lab group check it out, and they were impressed, so I knew something was genuine.

Others also know, but the capacitor discharge and battery regeneration ‘secrets’ are still not widely developed. Peter Lindemann picked up the investigation, and learned much more, but evidently has not developed models for use.

Gray, a crafty charmer, spun yarns to all who listened, and when I asked why he insisted on making an auto engine rather than a portable generator, he gave me unsatisfactory answers. Probably because he was in negotiations at the time with another inventor, Paul Lewis of Nebraska, who built and drove a thing called the fascination   car. An innovative three-wheel design that wound up ridiculed to death by money power, though I rode and drove one and with the Chevy engine, it was impressive.

Now go to the Rail Gun story.   This is essentially Gray’s capacitor discharge device on steroids. There is no reason this same technology could not be developed to make all the electricity the world needs. I know this because in my last communications with Ed Gray, he was still demonstrating for potential investors in September 1985 15 years after we first met. He mailed a video tape from TV station KTVB in Boise, Idaho whereon he demonstated the ‘missile’ firing power of his regenerative capacitor discharge system. Lindemann has this video, last I heard.

On film Ed stood next to a ‘ten-foot pole’ jutting up from the floor. A bowling ball with a hole in it sat on the pole like a bead on a string. Ed, with a switch device in his hand talked, then clicked to ‘fire’ the bowling ball up the pole—POW! He repeated the shot many times to demonstrate the fact the batteries regenerated as always.

In a letter dated September 3, 1985, Ed wrote: “Since my last conversation with you I have had several conversations with Congressmen and Senators. They seemed dismayed that this technology has existed and not come to their attention before now. It is troubling to them knowing that the top brass has known of it since January 1983, and no action has been taken.”

Shortly thereafter we spoke on the phone and he said he was going to ‘retire’ and he suggested that DARPA was going to take care of him. That was my last direct contact,

Wow! The ‘rail gun‘shot a bullet five times faster than a speeding bullet, and did not need megawatts of juice, How come? Wouldn’t it have been nice had our tax money been invested in power generation? This makes the worthless enviro whacko groups look like the setup opposition they are.