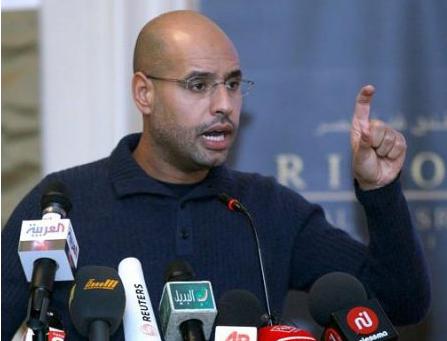 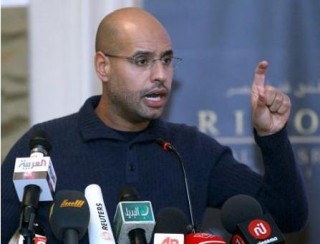 Will He fight in Court, or in a Guerrilla war ?

After the fall of his father’s government, Saif Gaddafi is, we are told, hiding away in Mali with tribesmen loyal to his family.

His legal counsel, someone I know, is seeking his exoneration at the International Criminal Court in the Hague and planning legal action against the United States.

At the same time, we are hearing threats of “retaliation” promising, not only continuation of the war in Libya but attacks on Americans and, in particular, America.

Does this make Saif Gaddafi a terrorist threat? Who can threaten acts of terror against the United States but not be named as a terrorist or even be put on a “no fly list?” Enigma, irony, what do we call this? Betrayal?

There are things we do know. Saif Gaddafi had, until recently, been a welcomed visitor around the world, particularly in Israel. His closest associates were British Prime Minister David Cameron and Rothschild heir, Nathan.

His ties? London School of Economics, long accused of being a “nest of Zionist spies” by the Arab world.

Then again, we have the equally enigmatic questions of Gaddafi family history and the real question, where is all the money?

$70 billion dollars is supposedly under Saif Gaddafi’s control despite orders from the United Nations to freeze all Gaddafi and Libyan assets.

Those Libyan stories, “Gaddafi and his terrorists” are now no longer credible, part of the endless lies of the Cold War.

The long and short of it is that Gaddafi was a “survivor,” who played east against west in the Cold War, friendly to the Soviets when he needed but also working actively against them on behest of the west and, in particular, the CIA, for decades.

Records from the Reagan Presidential Library confirm Lee Wanta as National Intelligence Coordinator and his appointment as Inspector General of the Department of Defense. Reagan’s daily diaries outline meetings with Wanta.

I have known Wanta for years, having been introduced by a real “big name” government spook that none of you have heard of, thus a “real one.”

Wanta has been grilled for endless hours, and his detailed knowledge of operations, some I knew some of, some I knew well and some I was totally in the cold on has made him a fascinating source.

Years ago, when Wanta used to talk “trillions of dollars” people went bananas.

Now that we all know that outfits like Merrill Lynch have misplaced over $70 trillion they admit to, out of $1,450 trillion of total “toxic securities,” we are told exist on the world market.

Wanta has new credibility.  Wanta’s “trillions” are real, documented and add credibility to his other roles in the intelligence community and the information, some of it shocking, that he is bringing forward after all these years.

I have debriefed Wanta on Libya, Wanta, Susan Lindauer and, years ago, Gaddafi himself. Is there a clear story of “good and evil?”

Not hardly. Positions we have taken on UN backing is based on VT correspondents who lived in Libya, those that have survived, who questioned aspects of Gaddafi’s rule, describing it as brutal and corrupt.

To us, it didn’t always seem that way and, frankly, none from the West had open access to Libya.

So, when Wanta explained to me that the 1986 bombing of Tripoli was part of a secret protocol between President Reagan and Colonel Gaddafi, I was flabbergasted.

He said Gaddafi never had Americans killed in Germany as claimed and also denies any Gaddafi involvement in the Lockerbie bombing.

Wanta said it was all an act, to preserve Gaddafi’s appearance of hatred toward America while he remained, or seem to at least, a stalwart ally. The truth? Who the hell knows.

This is either the truth or another cover story.

Gaddafi, faced with sanctions, decides to join the Global War on Terror, become a “neocon,” make friends with Tony Blair, something I wouldn’t wish on a rattlesnake, and invite America and Britain to take over Libya.

Gaddafi, at the same time, got to “slowly” dismantle his WMD programs.

According to Wikileaks, he was still building WMD facilities as late as 2006.

Actually, he never dismantled his programs.

A week ago, stockpiles of mustard gas were found in Libya. It is more than rumored he had more than mustard gas, VX for sure, anthrax, small pox variations and maybe some nuclear material or worse.

Now we begin to look at the dots that do not connect, the puzzle pieces that do not fit together and why the games and rhetoric we use so often have not come into play.

If, as claimed, Saif Gaddafi is in Mali with tribesmen that America long ago identified as aligned with Al Qaeda, staying at a camp we call an “Al Qaeda base” and has $70 billion dollars stashed somewhere….

Do we feel guilty?

When we turned on his father, whether or not it may or may not have been justified by the claims of Amnesty International, the organization that brought the charges to the United Nations Security Council, does it not explain the rationale for America trying to kill Gaddafi because we needed to silence him?

If he was, as I have from many sources, a major CIA asset, was he “silenced” because of what he knew or for other reasons?

Another question: Why were so many Americans that are closely aligned with Israel active in orchestrating a public relations campaign on behalf of Gaddafi?

Was it because he was laundering money to pay American neocons through terror organizations in Lebanon, something we discovered?

Is it deeper? If all Gaddafi funds were seized, where is the supposed $70 billion stashed away?

Here is one of the best parts.

Talk about being “above the law”…

So, perhaps we are not hunting down Saif Gaddafi because he has billions invested in neocon America?

If he had secrets, we would certainly kill him for that. It is what we do.

If Saif has billions invested with the Bush family, how much is with our British friends, folks close to Blair and Cameron?

Since the world is circling Iran like vultures, all over rumors spread by Tel Aviv, secret nuclear facilities that after years and years nobody can find, after Tel Aviv burned all of its bridges of credibility when it was the conduit for the intelligence lies that led to the debacle in Iraq….

In fact, Tel Aviv, meaning the Likudists seeking war, have been abandoned by their own.  Former Mossad and Shin Bet heads call Netanyahu a “madman.”

But, back to Saif Gaddafi. Is he the new head of Al Qaeda, a case easily made with enough imagination, perhaps hiding out in one of those 10 layer bunkers that Rumsfeld imagined were in Afghanistan?

We say things like this all the time.  This is the basis of our culture.

What we haven’t discussed is the wishes of the people of Libya. I don’t see any signs of anyone caring, do you? Was Saif like the sons of Saddam?

Since the end of Gulf War I, we learned that even the first Gulf War was based on lies, that America had invited Iraq into Kuwait, the invasion was authorized by Washington.

Congressman Ron Paul read the memo in front of congress. Nobody said a word.

Gulf War II was worse.  This was conclusively proven though all aspects of 9/11, the needed precursor are still shrouded in mist that isn’t mist at all.

Afghanistan was worse still, bin Laden, like Gaddafi, was CIA and we have so much proof on that we could build an encyclopedia.

Does the CIA simply turn on their own, murder their most important operatives, turn on our allies, when it suits them?

Seems so, at least I see this on TV all the time.

If Saif Gaddafi has all that money and knows all those things, and this certainly seems to be as it is, what can he tell us?

What will be done to keep him from telling us?

Will he get political asylum?

Will he be arrested but found innocent?

Will he get a prison sentence but have a paid double serve his sentence for him, something we have learned is not uncommon.

Will he be murdered as was his father?

Now we ask, why isn’t he being hunted. What are we afraid of? What does this tell us. It certainly tells us something.