Home Government John Birch Society Exposes Newt For The Bankster Boy He Is! 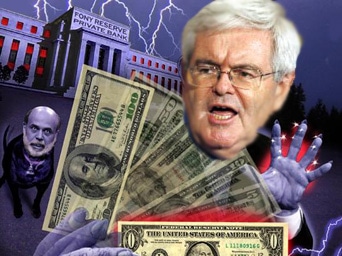 While many of us may harbor a bad taste for the ideas and issues supported by the John Birch Society not the least of which has been their support for Israel these many years, We all will do well to devote a half hour to viewing and absorbing this video:

Why? Because the mainstream media is now pushing Newt Gingrich toward the top of the pile among Republican Party Presidential hopefuls. Newt would be a bigger disaster for America than just about any other. See the video for all the evidence needed.

Newt Gingrich is quick on his feet, and he has decades of experience in the Beltway world, so many may be overly impressed.

How soon we forget. It was Newt who led the crusade against American Sovereignty and Our Constitution back during the Clinton administration, Yet he had the chutzpah to agree with Ron Paul during one of those alleged debates on television; slipping in comments that appeared he also opposes the Federal Reserve and big government. Nothing is farther than the truth. This video brings up the Newtsters sordid Internationalist past with stunning detail.

Even progressives will relish this presentation because it has so much obvious truth it warms the heart of genuine people who still revere the American Constitutional Republic’s original purposes.

Newt Led the charge for the bastards smart Americans are now protesting, but the whores of the Fourth estate dutifully ignore the facts to praise this disgusting slimeball.

Take this video down to the Country Club and show it to the brain dead Republicans; tell them it’s brother John Birch material.