Home Government Briber or Bribee? Which is Worse? 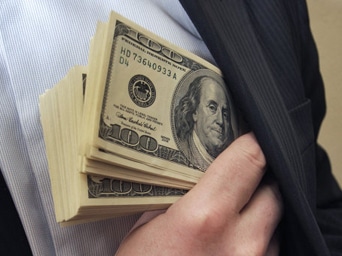 We have a problem. Our streets are occupied by throngs of angry, ignorant subjects who know our ‘great’ society is not what we want it to be.

They may be a mob of unwashed masses toting pitchforks in bewilderment, thereby becoming targets for the whoring media and pundits, but they are wise enough to know the problem has to do with ‘the finest Congress money can buy.”

The solution is simple, but not easy.

Americans must determine which is worse, those who bribe Congress, or those who are Bribable?

A huge factor of Ron Paul’s appeal is that he appears impervious to the easy money of the Power Lobbies. He has an enviable political track record the others covet, but those others simply cannot fathom why more folks do not fall for Bribees.

If the vague classes known as ‘the people,’ are ever to right the Mammon-created wrongs within our cumbersome form of government, they must, as we all know, and have exhorted for years, somehow focus, or re-focus on larger principles.

At this time, the mass focus, which takes direction from skilled focusers within the fabric of society, is on the corrupt ‘Power of the corporate lobby.’

Well, that corrupt power has noted the obvious—They outed themselves by orchestrating the ‘bailouts’ of the fattest cats on earth, while pissing all over everybody else.

If they had been just a little bit more subtle, the bleeping masses probably wouldn’t have noticed. (For example, the dumb-masses missed the wars!)

Now folks are ‘madder than hell, and they are not going to take it anymore! Wanna bet?

The mob is screaming for justice and blames the banksters, as they should, but what about those in government that took the loot while carrying the flag, creating lucrative voting-block unions and praying in schools to stop homo-marriage? What about them?

It is far, far easier and surely more effective to shift focus from the Bribers to the Bribees. Is it Not?

In our case the Bribers actually supplied the ‘capital’ and the impetus for all the goodies we dumb clucks crave (Christmas is coming.) So they are much harder to round up and hang than the few hundred corrupt bribees.

We, the people are surely lazy and indolent, so why try to snag and stop the bribers, who hold all the cards? We supposedly elect our own Bribees, and the representatives in the House of corruption, all have ‘local offices’ to better serve their constituents, thus giving us easy targets.

We only give ammo to the cannons of industry and their media whores by occupying Wall Street, when we shudda ‘occupied’ the streets in front of the local offices.

No need for violence, just have ‘numbers’. These weasels will squirm as you have never seen before, The wonderful Internet will provide the data to stick under their noses as we demand to know which lobbyist they are serving as Bribee.

I would love to be among the pitchfork waving throng in front of our multi-term Republican stalwart that is ensconced on Sanibel Island, when he deigns to show up in his ‘district.

Forget the left/right dialectic, it is only illusion, corruption and the bribee epidemic has always been ‘bipartisan.’