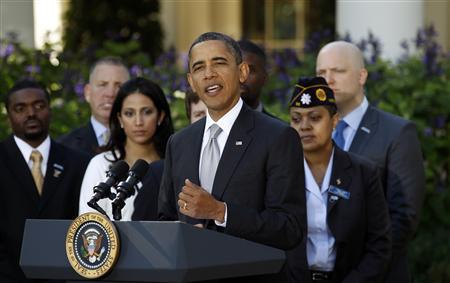 With polls showing Americans deeply worried about the state of the economy and his own approval ratings stuck in the low 40s, Obama must bring down the jobless rate to be confident of winning a second White House term in the election next year.

Republicans say Obama, a Democrat, is playing politics. They point out that legislation passed by the Republican-controlled House of Representatives to help veterans find work is being held up in the Democratic-controlled Senate.

Unemployment among veterans who have served since the September 11, 2001, attacks on the United States stood at 12.1 percent in October, a rise from 11.7 percent in September and much higher than the national jobless rate last month of 9.0 percent.

“That is not right. It doesn’t make sense … we are determined to change that,” Obama said, noting more veterans would be entering the labor force after his decision to pull out the remaining 40,000 U.S. troops in Iraq by the end of the year.

Congressional Republicans have balked at passing Obama’s jobs package in its entirety because it is paid for by raising taxes on wealthier Americans. But parts of the package are expected to gain bipartisan support eventually and become law.

“We need the president to engage in the process, not just give more speeches,” said Brendan Buck, spokesman for House Speaker John Boehner, the top Republican in Congress. “Giving veterans a hand up is one clear area of common ground.”

Obama has rolled out a series of executive actions to get around a divided Congress that the White House says will spur hiring, although it has offered few concrete estimates on how many actual jobs each initiative will create.

The three executive announcements Obama announced on Monday that will take effect without congressional action are a new online service to help veterans find work, creating a veterans’ job bank, and a veterans’ “gold card” granting them special services and care at career centers.

The White House event was part of a broader administration push on veterans’ employment. Defense Secretary Leon Panetta visited New York on Monday to urge corporate executives to hire veterans at an event hosted by the Goldman Sachs Foundation.