Home Veterans Military Should “Just Say No” To Iran Attack 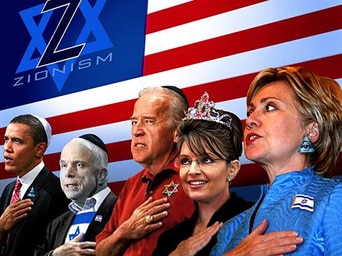 Who’s going to stop the Zionists from using the US military to attack Iran?

The President can’t do it – not in an election year.

The Congress can’t do it – not in an election year, or any year for that matter.

The Zionists have a down payment on the White House, and they own Congress free and clear. Zionist sources are said to provide roughly half of the bribe money euphemistically known as “campaign contributions.” They’ve turned the entire US political class into a gang of treasonous whores who daily pledge undying allegiance to the Israeli flag.

So who can stop them? Who can prevent a ruinous war on Iran?

Only the US military.

US military leaders – the intelligent ones, not the “my God is bigger than your God” loonies like Gen. Boykin – need to schedule some visits to key political leaders. Some very, very brief visits. All they need to say is: “The answer is no.” Then: “What part of ‘no’ don’t you understand?” And finally: “Any Israeli planes that attempt to attack Iran will be shot out of the sky; and any American involvement in an Israeli-instigated war with Iran will be on the side of Iran.”

The Zio-con traitors will whine: “What happened to civilian oversight of the military? Doesn’t the military have to obey executive orders and congressional mandates” ?

Once again, the answer is no. If the executive orders a war crime, or congress mandates a war crime, those orders are null and void. The proper course for a military person ordered to participate in a war crime is to arrest, or in the worst-case scenario kill, the person or persons giving the illegal order.

An Israeli attack on Iran would not only be a war crime; it would be a clear example of the most terrible, most evil of all war crimes: the crime of aggression.

If the White House and Congress ordered the US military to participate in the long-planned Zionist attack on Iran, it would be more honorable, and more legally and morally defensible, to bomb the White House and Congress to smithereens and kill all the traitors in those usurped buildings, than to fire even one bullet in anger against a people who have never attacked or threatened us.

But it shouldn’t have to come to that. If our sane military leaders (assuming that isn’t an oxymoron) make it clear that they will “just say no” if ordered to commit more war crimes – especially if the war crimes in question are part of a treasonous and suicidal attack on Iran for Israel – the bribe-sucking traitors dressed as politicians will presumably refrain from issuing any such illegal orders.

Gordon Duff : Restore The Draft, Israel Is Demanding It