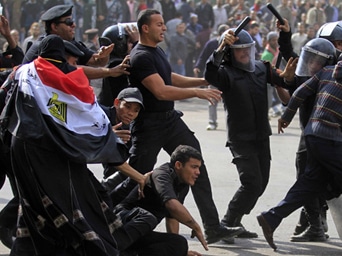 The state television in Egypt aired pictures of three American students who, according to Egypt interior ministry sources, were arrested by the police last Monday on rioting charges.

The American students are facing accusations of participating in Cairo riots and throwing Rocks & Molotov cocktail bottles at the Egyptian police forces near Tahrir square in downtown Cairo.

The TV report didn’t mention the names of the three Americans, but the American embassy in Cairo has confirmed the news of their detention. The trio, studying at the American University in Cairo, have been named as Derrik Sweeney and Gregory Porter, both 19 years old, and Luke Gates, 21.( Watch the video of CBS news coverage interviewing their families in the United States)

It seems the three American teens sympathized with the Egyptian protesters in their latest standoff with the police forces they decided to show some support and give them a hand to occupy Tahrir square!