Home Veterans Veterans and Children: NOT Just Homeless at the Holidays 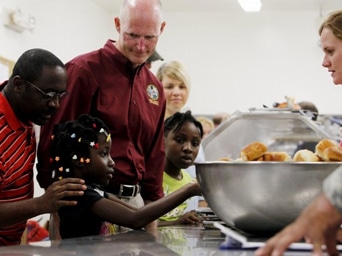 Republican Gov. Rick Scott claimed, “I care completely” about Homelessness following his proposal to cut ALL funding for Homeless Programs in Florida.

Scott was also photographed passing out Thanksgiving dinners in a Naples, Florida shelter, which fed 7,000 families during that holiday week.

Scott said “I care completely about all these programs,” but reality is that his budget cuts “slashed funding to some veteran and farm surplus programs that helped the homeless.” [1]

One Jacksonville homeless shelter official stated that Scott “zeroed out all homeless funding” which totaled $7 million that helped sustain programs dedicated to homelessness prevention, housing initiatives, and programs that “re-house” people once they’re on the street. The official added, “Not only that, he took out the line items so it can never be funded again.” [Ibid]

Scott also vetoed $12 million in funding that the state legislature had passed to support the 17,000 homeless veterans in Florida.

When I learned of the homeless situation in my backyard in Central Florida, I began volunteering with NEW BEGINNINGS www.newbeginningslake.org the only homeless recovery program in south Lake County [a once thriving citrus community], but I had already committed to doing something about homelessness in my District:

To: Florida From: Candidate for US HOUSE REPRESENTATIVES 2:00

A few years ago, twelve community leaders formed NEW BEGINNINGS in an effort to help a community of affluence respond to the many needs of the indigent among us.

Steve Smith is the Executive Director of New Beginnings of Lake County and also Chairman of the Mid Florida Homeless Coalition that is developing a plan to end homelessness.

Until recently construction work had provided 80% of the jobs after the citrus froze and ended that industry in the 1980’s and land went cheap and building went wild.

Today construction has slowed and businesses have shut down and the area is experiencing double digit unemployment with thousands of foreclosures.

45,000 people use food cards and 3,000 homeless students are in the local school system.

Steve Smith’s “biggest concern is that we cannot keep up with the growing demand and provide the necessary recovery resources. The schools do a monthly headcount and state the rate is growing at an alarming rate!”

The Florida Dept of Education reports that out of the 2,992 homeless students:

Smith added, “We know this figure is much higher, but many don’t want to admit this humbling situation for fear of losing their children!”

Federal, State, County governments and Corporations with Foundations have cut funding and churches are also giving less to help the “least among us”.

Smith says the motto of NEW BEGINNINGS is about teaching people to fish and not just handing them out.

The organization exists primarily by donations and feed over 400 people weekly at an outreach event held at the Winn Dixie parking lot on SR 50 in Clermont, every Saturday morning.

I am one of many volunteers who meet the people who show up and do the initial interview. I learn of their struggles and provide lists of potential agencies that might help their situation; but they have to do the phone and leg work. I give them lists of local companies who have job openings and other volunteers pass out food bags, hot meals, clothes and prayer. We know we are only tapping a minority although weekly more keep coming in an act of faith that there are people who care and who will do something for a neighbor in need.