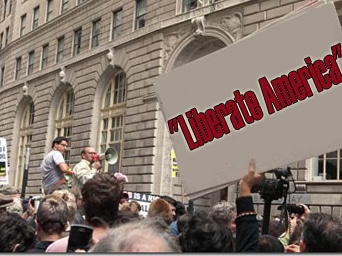 The occupy movement needs to take a cue from Egypt, where the main protest is held in Tahrir [“Liberate”] Square and where the real enemy is openly identified. In short, “Occupy Wall Street” needs to evolve into “Liberate America.”

If Americans are ever to take back their country, they need to take back control of their money and that means exposing and reversing the Zionist occupation of Wall Street.

If the U.S. were a genuine republic, Congress would pass laws to protect the public, not exploit it, and the police would uphold the law and keep the peace, not break the law and foment unrest. Based on this rather obvious depiction of recent events, we may safely conclude that the U.S. is not a republic in any democratic sense of the word.

As I show in my book The Host and the Parasite, the U.S. has degenerated into a police state run by a cabal that worships corporate greed and owes a prior allegiance to a foreign state—Israel. As This Israeli occupation, though, is the real story behind the “Occupy [insert city] Movement,” not the burgeoning, populist protest. Yet somehow the absurdity of a politically and economically disenfranchised American public occupying an already occupied country has escaped the media’s notice.

Leaving aside the pro-Israel bias built into the mainstream media, the name “Occupy Wall Street” is part of the problem. It focuses attention on the occupiers of Wall Street not the reason for the occupation. It allows the authorities to misrepresent the protestors as disaffected radicals who are interested only in pushing an anti-establishment agenda against the interests of the nation.

If looked at properly, the occupy movement is really a liberation movement aimed at rescuing some semblance of American republicanism from the pre-existing Israeli occupation. Imagine if the country’s money supply were controlled by the publicly owned Treasury Department, not a privately owned pro-Israel corporation (The Federal Reserve); if foreign policy were made in the U.S.’s national interest, not Israel’s; and if the rule of law were defended, not subverted. In such a world the “occupy” movement need never have arisen.

The occupy movement needs to take a cue from Egypt, where the main protest is held in Tahrir [“Liberate”] Square and where the real enemy is openly identified. In short, “Occupy Wall Street” needs to evolve into “Liberate America.” As a word, “occupy” is static and self-referential, and does not speak to anything outside of itself. “Liberate” speaks to a positive outcome beyond the present protest, and, most importantly, calls attention to the need for liberation, and this in turn invites investigation into those who are denying Americans their liberty.

Admittedly,“Liberate Wall Street” doesn’t have the right ring and sounds incongruously sympathetic to those responsible for the banking fiasco, yet it would be to call attention to the real occupation, because the acceleration of zionist control of the U.S. that came with the election of Ronald Reagan in 1980 neatly coincides with the beginnings of the banking crisis. University of Connecticut law professor Patricia McCoy identifies two pieces of legislation from these early Reagan years that are directly responsible for the current banking/mortgage crisis.

The first is the Depository Institutions Deregulation and Monetary Control Act of 1980 (DIDMCA). It abolished state usury caps that limited the interest rate banks could charge on primary mortgages, and made possible predatory lending to vulnerable, poor Americans whose credit would normally have disqualified them from home ownership loans.

The second, and more serious, piece of legislation was the Alternative Mortgage Transactions Parity Act of 1982 (AMTPA). It allowed banks to offer more than conventional fixed-rate, amortizing mortgages stipulated by law. With usury laws now rendered impotent, banks now engaged in the kind of irresponsible lending that sent millions of Americans into foreclosure:

These heretofore illegal lending practices grew even more illegal after 1999 when the 1933 Glass-Steagal Act was repealed. The act formally separated the activities of investment banks (which issued securities) and commercial banks (which accept deposits), and prohibited investment bankers from serving in the boards of commercial banks. The 1999 passage of the Gramm–Leach–Bliley Act essentially decriminalized these conflicts of interest, with the result that bloated composite banks with bad mortgage debts would set off a chain of failures throughout the entire banking industry.

It’s hard to connect corrupt banking practices directly with the zionization of the U.S., but by duping the American lower classes the banks did end up serving Israel by distracting the nation from the invasion of Iraq. In The Wandering Who—a masterful critique of Jewishness, Zionism and Israel—musician and philosopher Gilad Atzmon made the connection:

“The overall U.S. homeownership rate increased from 64 percent in 1994 to a peak in 2004 with an all-time high of 69.2 percent. Real estate had become the leading business in America; more and more speculators invested money in the business. During 2006, 22 percent of homes purchased (1.65 million units) were for investment purposes, with an additional 14 percent (1.07 million units) purchased as vacation homes.

“These figures led Americans to believe that their economy was indeed booming. And when an economy is booming, nobody is really interested in foreign affairs, certainly not in a million dead Iraqis. But then the grave reality dawned on the many struggling, working class Americans and immigrants, who were failing to pay back money they didn’t have in the first place.”

For a detailed analysis of Israel’s powers of financial and political extortion over the U.S. see the analysis by the Council for the National Interest in Veterans Today. Most disturbing from a financial point of view is that the Congress pays out all of Israel’s aid [sic] in one lump sum at the beginning of the year into an interest bearing account at the Federal Reserve. That means the U.S. forces its citizens to pay interest on the money it gives to Israel, while Israel makes a profit, and keeps it at the same private corporation that controls the U.S. money supply!

The American public will do without jobs, health insurance, housing or food, but Congress has ensured that Israel will never want for anything.

If Americans are ever to take back their country, they need to take back control of their money and that means exposing and reversing the Zionist occupation of Wall Street.

Writes author Greg Felton, “The United States became midwife to a war crime when it endorsed the creation of Israel in 1948 and blackmailed European nations into supporting it. From this time forward, the Zionist parasite began leaching off the U.S.” According to Felton, “The September 11 attack was to the Zionist junta what the Reichstag fire was to the Nazis. It created the seminal moment of contrived paranoia that allowed the junta to pass the Orwellian USA PATRIOT Act, by which the U.S. became a de facto police state, a necessary step to put the junta above the law so that it could bastardize the constitution to serve the greater good of Israel. The demonization of Muslims is the key tactic that makes mass murder, torture and gross violations of civil liberties possible. Al Qaida is a myth concocted to manufacture a common enemy so that people would accept invasions of privacy and tolerate the mistreatment of Muslims.”

“A lucid and timely compilation of information and questions that should be the fodder of discussions in America and beyond. Readers will find this book a worthwhile acquisition even when they may not agree with everything stated.” –Professor Mazin Qumsiyeh, Yale University

“Greg Felton, an erudite journalist and historian, exposes the duplicity and hypocrisy of George W. Bush’s ‘war on terrorism.’ His analysis of the alliance of neo-conservatism and Christian/Jewish Zionism is highly informative and well researched, a subject our media keep untold.” –Ismail Zayid, President, Canada Palestine Association

“The Host and The Parasite is a profound reading of today’s world. It forcefully brings to the surface historical injustices; injustices that today’s powers-to-be buried in the trash bin of history, along with the hopes and dreams of entire peoples.” –Sam Bahour, Ramallah, Palestine