Home Veterans Afghanistan is a Racket: Straight Talk About War 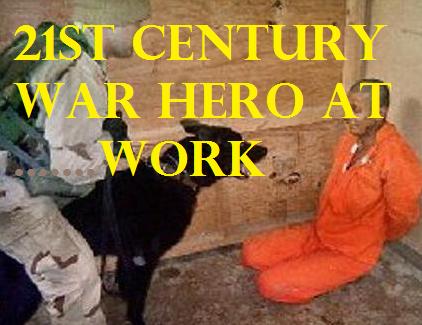 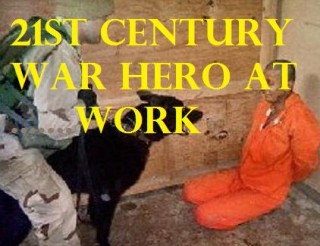 War is a racket, Afghanitan the worst in our history.  The “War is a Racket” part I borrowed from Smedley Butler and will continue to do so.   As for Afghanistan, I am supposed to be an expert on the region, have been briefed and have briefed top military experts on the region.

The photo on the left, the MP terrorizing a “suspect?”  Bet he wears medals and is proud.  Even using an animal like this is abuse.  If you check the records, almost every “suspect” detained and tortured, turned out to be innocent except for a select few, some tortured for years, the only evidence against them their confessions, written in their own blood.

Let’s be honest for a second.  Isn’t a real hero someone who fights people like this?  Isn’t this a murderous brute and war criminal, a “concentration camp” torturer?  Aren’t we supposed to hate them, hunt them down and kill them?  Isn’t this what every American child is taught from birth?

Now the “them” is us?  Do we hunt down ourselves?

I have friends there, many in Pakistan, many in Afghanistan, many working for the US, many who want the US to stay and straighten things out.  I have great affection for Afghanistan and its people, particularly those fighting against us.  As usual, they are generally better than those “with us.”

I’ve been there before, I “did” Vietnam, up close and personal and saw that one immediately.

The talk has to end.  The enemy is not the Taliban.  “Taliban” means “student.”

Who is the enemy?  The people are the enemy.  Why are they fighting us?  We invaded, they are trying to throw us out?

As for Pakistan.  President Karzai, the oil executive placed in office through a rigged election after the US invasion, Americans allied to the drug lords of the north considered “foreigners” by the majority of Afghans….

Do I need to continue?  We have committed more war crimes in Afghanistan, built a vast drug empire, Americans in military, government, not just the CIA, have stolen endless billions there, Afghanistan is a racket.

For 11 years we have sent Americans home in body bags, thrown their parts, arms and legs in the city dump outside Dover, Maryland and had parades, have given out medals and continually run phony TV shows talking about “the Taliban.”

What there is in Afghanistan is the Mujihideen, a group of religious extremists, funded by Saudi Arabia, created by the CIA and Osama bin Laden, coordinated by our allies in Pakistan, I might say “heroic allies” in Pakistan, the ones we betray on a daily basis.

There is no “Taliban.”

Some say we should stay because we created the problem.  There is another problem with this.  We are going the wrong way 300 miles an hour, as usual.  We are doing nothing right, we are making everything worse, we are wasting money we don’t have on a war that is driven by the drug cartels.

Who are the drug cartels?

The Neocons run the drug cartels including members of congress.  They actually physically run the drug business personally and I know their damned names.

The FBI does too.  They smuggle heroin, the built the processing plants, they partner with the “CIA contracting firms” that fly the drugs around the world and often these politicians actually pick up their payoffs themselves while pretending to be in Afghanistan or Pakistan of “fact finding” missions.

After 11 years, we have created a police force in Afghanistan led by people considered warlords and mobsters, an army likely to fight against us and as of last week, was discussing invading Pakistan.

Their stories about the ISI, Pakistan’s security forces running the Taliban…

The Taliban hates Pakistan.  They are ethnic/tribal blood enemies and everyone knows that or should were they informed beyond the moronic level.

Who is orchestrating this disastrous war?

Are our men and women fighting in Afghanistan heroes?  I am a former Marine combat infantryman.  I know the game and have fought “for” corporate America in an unjust war.  I can drag the excuse out that I fought for my friends or “honor” but even that lie is getting tougher and tougher.

I just can do it anymore.

We didn’t have that many Marines in Vietnam and claim we lost around 14,000 killed, Marines alone.  The number is closer to 21,000, more than we lost in World War II.

The enemy we fought was always better than the country we said we were defending.  We all said it then and those who don’t say it now are phonies and liars.  If you were really there, you knew the difference, we were defending a corrupt dictatorship against the Vietnamese people, fighting for an American government that had been overthrown with the assassination of John F. Kennedy.  The “Oswald” lie is done.  Kennedy was murdered to overthrow our government, maybe not because of  Vietnam alone, many reasons were involved.

Kennedy wasn’t going to play anymore, no Vietnam War, no Federal Reserve, no Israeli nuclear weapons, no more “New World Order, “meaning “no more rule by the same few families that have pulled the strings for the last couple of centuries” including our wonderful and seemingly harmless friends, the Freemasons.

Since Kennedy’s death, America has descended into police state dictatorship, our military has become a fearful weapon used against the free and decent people of the world while Americans are continually propagandized with phony threats, victimized by war scares, censored news and phony terror attacks while we, as a nation, now face generations of poverty and collapse.

A reexamination of history, not by “old line” revisionists or “holocaust deniers” but by quality scholars, something our controlled and propagandized universities are tasked with suppressing, can easily put a different spin on our history, one mor fact than fancy, rewriting our Civil War, World War I and even World War II and certainly everything since in a different light.

Most frightening thing of all is that, the more I look into it, the most important historical period of our time, the Second World War, was edited, censored, rationalized and rewritten by a bizarre combination of Stalin and Wall Street.

I am not going to tell anyone what to believe or not believe.  There are few families that don’t have to go back very far to find victims of that war or for others, vast fortunes and infinite power the war brought them as well.

What is slowly coming to the surface is that the iconic events, Pearl Harbor or the “invasion of Poland,” may not have been what they seemed but rather moves on a chessboard orchestrated much as things are today.

Oh, the war was very real, all wars are, the deaths are real, for the most part, but wars, in particular World War 2, is steeped in lies, steeped in mythology and America will be lucky to survive history a century now without being seen as Germany is seen now.

Yes, what is coming out is that shocking.

Increasingly, the gulf between mythology and truth has always been a great one.   The “dark ages” were a period when a church that believed killing anyone who taught the earth wasn’t flat.  Those same forces are doing much the same thing.  If you didn’t hear that in Kennedy’s voice, you should have.

Where have things led me?

Years, actually decades of education, more appropriately “programming” has led me to the point where many have reached, where we talk about the 1%.  Even they are little more than the treasonous scum, just a bit further up the feeding order.

Remember learning about the “isms?”  Communism and Fascism?  Actually, there are more, universities love inventing things to confuse and obfuscate about.

Does this mean that Communism and Fascism were  ten times more free than we are now?

Think about it.  If we erased the wartime propaganda, how would Nazi Germany really look?  Was it a land of gas chambers and secret police?

America is a land of prisons and FEMA camps, of illegal wars, of vast financial corruption, of rigged elections, where petty cheats and massive frauds run everything, where the only crimes that are punished are little more than stealing bread or speaking the truth, or using and selling the governments narcotics.

Anything else, no matter how “iconic” is likely to end up a fiction, especially if it is something still continually televised or taught in schools.

Were it the truth, there would be no reason to teach it at all.  The truth isn’t very pretty.