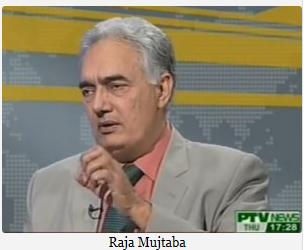 American public is the main suffering lot but are as helpless as it possibly could be. Now to bring peace to the world, a movement is needed to ‘Liberate America’. If it’s not forthcoming, not only the world peace would be a delusion but America would cease to be America.

To cover the latest NATO attack on Pakistan, Jeff Rense a worldwide name with millions of listeners hosted a talk show where I had Brig Imran Malik on the panel with me. This attack was not just something out of the blue or as the Americans claim to be an error but a well thought out extension of the events since 9/11.

The steps taken by Pakistan Army have galvanized the nation into one unity; this also reflects the emotions and the psyche of the Pakistani people who against all odds stand as one.

America is not fighting her own war but that of the Zionists and now the new partner to join is the Hidutva. Now US stands sandwiched between two evils, Zionism and Hindutva.

9/11 has changed the course of the world; prior to 9/11, the world was much more peaceful and livable. The Zionists over a period of time have not only penetrated the American policy making and decision making hierarchy at every level but have become much more vocal and visible in and around White House.

American public is the main suffering lot but are as helpless as it possibly could be. Now to bring peace to the world, a movement is needed to ‘Liberate America’. If it’s not forthcoming, not only the world peace would be a delusion but America would cease to be America.

Zionists only speak the language of force, violence, war and killings. What they want is total control of world in its complete sense. To attain their objectives, Zionists could not find a better tool than the US therefore they are fully entrenched in the American administration.

The only threat that the Zionists see is a divine religion, they have been able to eliminate the Christian threat since long. Today one can see many Christians who have turned atheist, non believers in The God. Now the only threat that remains is Islam; for the last many decades they are busy weakening Islam but they have not been able to convert Muslims into non believers but the only they had was when they were able to politically divide the Muslim world into smaller nation states and breakup Ottoman Empire.

Creation of Pakistan, the only ideological state of the world based on Islam came into being in 1947. David Ben-Gurion,

the first Israeli Prime Minister declared Pakistan to be a greater enemy than the Arabs. Pakistan has never recognized the state of Israel although in between Benazir and Parvez Musharraf tried to establish diplomatic relations but the public backlash was very severe that they could not take any further step.

Now Pakistan is the only Muslim nuclear country proving to be a stumbling block for the Zionists to make any headway in the Muslim world. Earlier any Muslim country like Iraq etc that ventured into acquiring nuclear capability were knocked out either through direct air raids or political isolation. Pakistan, not only survived but it succeeded in achieving its nuclear capability whose foundations were laid by Muhammad Ayub then followed by Z A Bhutto. Eventually maximum thrust in this direction was provided by General Ziaul Haq in whose time the bomb saw its completion.

9/11 was staged to attack Afghanistan to be used as a launching a pad to denuclearize, de-Islamize and delink it from China. Pakistan was gradually taken over through political regimes, Parvez Musharraf did the maximum damage to Pakistan’s ideology through his ‘enlightened moderation’ and removing the Quranic verses from the curriculum of the schools and colleges.

His departure saw the installation of Zardari regime when Benazir had been assassinated through a conspiracy of sorts. Zardari has Rahman Malik as his interior minister who is blamed for ‘Blackwater’ menace that operates as a CIA contractor.

• To organize and launch terrorists attacks.

OBL operation in Abbottabad was a complete embarrassment for Pakistan military, this humiliated Pakistan Army and Pakistan Air Force that it became the talk of the town. Thereafter there was no letup; PNS Mehran, Frontier Constabulary and attack on other defence and security installations came in quick succession.

In attaining its objectives, US also gave lot of space to India in Afghanistan that is operating in tandem with Israel through Mossad and MI6. What the world is not realizing that Hindutwa is an equally threatening ideology like Zionism; world will have to fight both simultaneously to attain peace.

What America is working at is to place Pakistan under Indian hegemony for the greater benefit of Zionism and Zionist Israel. This would be strongly resented by every Pakistani of every shade and colour. America can bend backwards but the Pakistani people would never accept this but in the process America would further enhance anti-American sentiment.

America’s open all out support to Zionists has made America into a Zionist state. Now, it longer represent the either the

vision of its founding fathers or the aspirations of the American people. This is a widening gulf between the American public and the Administration at all levels. All wars are launched for or on behest of the Zionist dominated corporate world.

NATO attack on Salala border post by all means was a probe to see Pakistan’s reaction. Had this attack been taken lightly, America would have come with a much bigger attack to silent Pakistan. But, this attack has come as a blessing in disguise that has united the nation irrespective of any political thinking.

For the first time in words and deeds, the political government and the Army are on the same page. America has worked her own destruction; now if the US does not quit Afghanistan in a hurry, its logistic support would get expensive beyond proportions. Pakistan has not only blocked all supply lines to Afghanistan but has also asked to vacate ‘Shamsi Base’ as well. December 11 is the deadline. This base was of a very vital strategic advantage to the US. From here she could look into Iran, cover Gawadar port or even influence strait of Hormuz. This must have given a great relief to Iran as well. With the closure of NATO supplies, the US will not be able to survive for more than a few weeks. Taking advantage of this choke the Russian Ambassador to the NATO has also sounded a clear warning to draw their advantage on the NATO Shield that its deploying in EU. Therefore if all supply routes are blocked what would happen to the US/NATO troops is anyone’s guess.

The link of the radio talk with Jeff Rense on his show is here. To listen to the entire talk please click the link below.

Play Recording Of The Radio Interview

Author Details
Raja Mujtaba
After graduating from the college, I joined Pakistan Army and was commissioned in a Tank Regiment. I am a veteran of Indo-Pakistan war. After leaving the Army, I joined IT as a profession. I was hired by Kuwait Air Force And Air Defence as an Adviser to computerise it's entire operation. Here I was the Chief Coordinator of the Project, Kuwait Automated Support System (KASS). It was a state of the art leading edge technology where we established over 500 online terminals network with dedicated voice and data communications. It had the Satellite linkups to connect with other systems and track the inventory movement for KAF & AD. On this project, I was coordinating with US Navy, IBM World, AT&T and Martin Marietta for development, deployment and operation of the KASS. Writing has always been a passion with me, been writing for 25 years for various newspapers and periodicals. Now for the last four years, I have formed my virtual Think Tank, Opinion Maker. Here we have some renowned writers from Pakistan and abroad who contribute regularly that's helping the world opinion in some way. I am a keen golfer may not be a good one but play on daily basis. I am also fond of using the camera to picture the nature and people.
http://www.opinion-maker.org
[email protected]
ATTENTION READERS
Due to the nature of independent content, VT cannot guarantee content validity.
We ask you to Read Our Content Policy so a clear comprehension of VT's independent non-censored media is understood and given its proper place in the world of news, opinion and media.