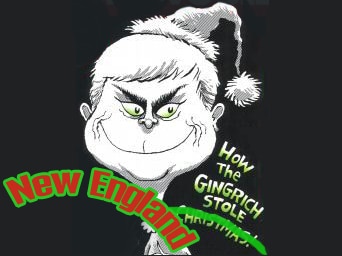 U.S. presidential aspirant, and former House Speaker Newt Gingrich recently declared that Palestinians are an “invented” people. This is a brilliant insight that lays the basis, finally, for a real solution to the Middle East conflict. Gingrich simply noted the well-known facts that Palestine, though referred to in old maps, was once part of the Ottoman Empire but not a separate nation, that after WWI and the end of the Ottoman Empire Palestine became merely “Mandate Palestine” under British rule and still not a formally separate and independent nation, and that so-called Palestinians speak Arabic, not Palestinianese, which means they are part of the Arab-speaking people (Arabs), who live in many nations and certainly do not need one more named “Palestine”; thus there is no nation of Palestine and hence no “Palestinian” people.

What this means is that we can solve the Middle East conflict by doing successfully to New England what was attempted unsuccessfully in Palestine, in other words move Israel from Palestine (where it only creates trouble) to New England, and move most of the non-Jewish “New Englanders” out of the newly created Israel and let them live in America, with all the rest of their fellow Americans. Since “New Englanders” are just an invented people, they have no grounds for objecting to this.

We can create a Jewish state in New England that will enjoy real security because this time the neighbors of the relocated Israel will be Americans, who are not anti-Semitic.

Fortunately, we can pretty much predict how this plan will work out because we have the experience of the attempt to do it in Palestine to learn from. The first thing to do is, as in 1947 in Palestine, have the United Nations declare that New England is a Jewish state, and have Jews in New England declare that region to be the Jewish state of Israel, the state of the Jewish people (only), and a state in which the sovereign authority is “the Jewish people” rather than all the people who are citizens of the state. The wording for this declaration can be taken right from the current Declaration of the State of Israel written in 1948.

The UN resolution should, of course, say that non-Jews in N.E. are allowed to remain there and be citizens of Israel. They will not, however, enjoy equal status with Jews under the law, and will have to accept the fact that they will be living in a state that does not even purport to represent them or their well-being, because they are not Jewish.

Of course, some of the non-Jews in N.E. may not take kindly to this, because for some mysterious reason they, unlike other Americans, will be discovered to have been covertly, innately and irrationally anti-Semitic all along (who knew?) They will argue against the plan to turn New England into Israel, with phrases about equal rights under the law and religious discrimination being unconstitutional and other nonsense. Unfortunately, some of these anti-Semites will resort to terrorist violence against turning New England into Israel. And since non-Jews in N.E. are a majority of the population (for the time being) their violence will have to be dealt with firmly. Israel will have to form a military to drive these terrorists, who deny Israel’s right to exist, into America (say upstate New York), which is, after all, where they belong since they are, of course, Americans, not “New Englanders.” “New England” is not a nation, just an invention, remember? (I cannot thank Newt Gingrich enough for this insight!)

What about all of the property in N.E. belonging to these anti-Semites who are now refugees in upstate New York. Well, war is war; this property–land, movable property, businesses, all of it–should be confiscated by the state of Israel for the use of newly arriving Jews to their new state. Furthermore, when the non-Jew refugees demand to be allowed to return to their towns in N.E. where they used to live, they should be refused entry into Israel (we don’t call it New England anymore.) They must not be allowed to return to their homes inside Israel because if they did then the population of Israel would no longer be majority Jewish, which would make Israel no longer a Jewish state. And we all know that the Jewish state of Israel has a right to exist. Right?

If the “New Englander” refugees insist that they have a right of return under article 13b of the UN’s Universal Declaration of Human Rights, which says everybody has a right to return to their country, they should be told, “Sorry, it’s not your country anymore.” Because of their anti-Semitism, they will not agree, but surely the majority of Americans, who are not anti-Semitic, will agree, no?

We know that not all of the anti-Semitic “New Englanders” will leave N.E. Some will stay. But many of those will have temporarily moved from their home town in N.E. to another town in N.E. to escape the violence (in some cases massacres of non-Jews, if the history in Palestine is any guide) that will have led to the flight of most non-Jews. Such persons should be declared “present absentees” on the grounds that though they are present inside Israel they were absent from their town of birth on a certain day (to be identified in a new law called the Absentee Property Law), and all of the property formerly owned by “present absentees” should become the property of the state of Israel to be used for the welfare of Jews, naturally. This new Absentee Property Law will be easy to write; it can be copied directly from the one already in effect in Israel today, where it classifies a quarter of a million non-Jewish people as “present absentees”–a status that can never change. Again, most Americans, not being anti-Semites, will support the wisdom of this law no doubt.

There is the possibility that the non-Jew anti-Semitic “New Englander” terrorist refugees in upstate New York will threaten the very existence of the state of Israel. To prevent this, Israel will have to occupy upstate New York and impose a military dictatorship over the anti-Semitic terrorist refugees, just as Israel has been forced to do in the West Bank and Gaza regions of Palestine. Nobody, especially peace-loving Jews, wants to impose a military dictatorship on anybody. But, alas, military occupations are unfortunate necessities in a world populated by anti-Semitic terrorists, and as disagreeable as such occupations are, surely good Americans, being strongly opposed to anti-Semitism and supportive of Israel’s right to exist, will not object. Right?