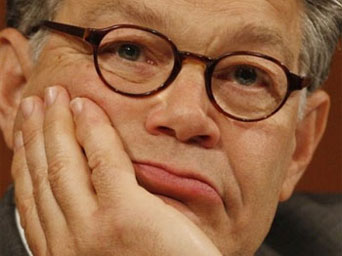 Why I Voted Against the National Defense Authorization Act

by Senator of Minnesota Al Franken

Yesterday, the Senate passed a bill that includes provisions on detention that I found simply unacceptable. These provisions are inconsistent with the liberties and freedoms that are at the core of the system our Founders established. And while I did in fact vote for an earlier version of the legislation, I did so with the hope that the final version would be significantly improved. That didn’t happen, and so I could not support the final bill.

The bill that passed on Thursday included several problematic provisions, the worst of which could allow the military to detain Americans indefinitely, without charge or trial, even if they’re captured in the U.S.

At their core, these provisions will radically alter how we investigate, arrest, and detain individuals suspected of terrorism. What’s more, they could undermine the safety of our troops stationed abroad, and they introduce new and unnecessary uncertainty into our counterterrorism efforts.

But before I get into the details of why I opposed these detainee provisions, I think it is important to recognize that September 11th irrevocably and unalterably changed our lives. I was in Minnesota that terrible day. A number of Minnesotans died — in the towers, in the air, and at the Pentagon. In New York in the months following the attacks, I attended the funerals of brave firefighters and law enforcement officers who sacrificed their lives to help rescue Americans from the towers. I can’t shake those images from my mind, and I am guessing like many of you, I won’t ever be able to erase the horrors of September 11th from my head.

But it is exactly in these difficult moments, in these periods of war, when our country is under attack, that we must be doubly vigilant about protecting what makes us Americans.

The Founders who crafted our Constitution and Bill of Rights were careful to draft a Constitution of limited powers — one that would protect Americans’ liberty at all times — both in war, and in peace.

As we reflect on what this bill will do, I think it is important to pause and remember some of the mistakes this country has made when we have been fearful of enemy attack.

Most notably, we made a grave, indefensible mistake during World War II, when President Roosevelt ordered the incarceration of more than 110,000 people of Japanese origin, as well as approximately 11,000 German-Americans and 3,000 Italian-Americans.

In 1971, President Richard Nixon signed into law the Non-Detention Act to make sure the U.S. government would never again subject any Americans to the unnecessary and unjustifiable imprisonment that so many Japanese-Americans, German-Americans, and Italian-Americans had to endure. It wasn’t until 1988, 46 years after the internment, when President Reagan signed the Civil Liberties Act, that the government formally acknowledged and apologized for the grave injustice that was done to citizens and permanent residents of Japanese ancestry.

These were dark, dark periods in American history. And it is easy today to think that is all behind us.

But I fear the detention provisions in the bill forget the lessons we learned from the mistakes we made when we interned thousands of innocent Japanese, Germans, and Italians.

With this defense authorization act, Congress will, for the first time in 60 years, authorize the indefinite detention of U.S. citizens without charge or trial, according to its advocates. This would be the first time that Congress has deviated from President Nixon’s Non-Detention Act. And what we are talking about here is that Americans could be subjected to life imprisonment without ever being charged, tried, or convicted of a crime, without ever having an opportunity to prove their innocence to a judge or a jury of their peers. And without the government ever having to prove their guilt beyond a reasonable doubt.

I think that denigrates the very foundations of this country. It denigrates the Bill of Rights. It denigrates what our Founders intended when they created a civilian, non-military justice system for trying and punishing people for crimes committed on U.S. soil. Our Founders were fearful of the military–and they purposely created a system of checks and balances to ensure we did not become a country under military rule. This bill undermines that core principle, which is why I could not support it.

Yesterday was the anniversary of the ratification of the Bill of Rights, and this wasn’t the way to mark its birthday.

Below is the comment from a VT contributor in response to Senator Al Franken’s article:

I definitely agree with Senator Al Franken.  What the House and Senate, along with our President, have done is simply put an end to our democracy and has moved us one step closer toward tyranny.  I am privileged to have met Senator Franken back in 2006 at Bagram AB in Afghanistan on a somewhat cold winter day as I was waiting to get a haircut and massage.  This happened before Senator Franken was elected and I know he is a straight shooter who loves our country dearly.  This NADD Legislation is worst then anything that has come out of Capitol Hill, maybe since the infamous McCarthy era.  Somehow someway we must find a way not only to repeal this terrible piece of legislation but also repeal the Patriot Act, both of which were designed solely for the benefit of those Zionist, Neocons & Corporations who control our government and don’t want the truth to be told.