Home Government Working It: A Review of Back to Work 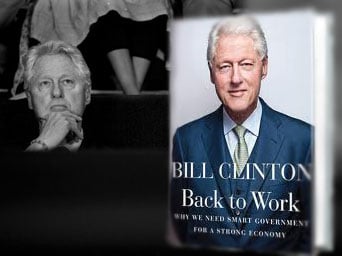 Working It: A Review of “Back to Work: Why We Need Smart Government for a Strong Economy” and Much More

Nearly forty-years ago I registered as an Independent voter and ever since have voted for democrats, republicans and independents according to who best addressed my burning issues.

In 2011, I became a ‘no party affiliation’ Citizen of CONSCIENCE for House of Representatives 2012 from District 5 in Florida.

After reading your latest book, “Back to Work: Why We Need Smart Government for a Strong Economy” I understand that what best defines me is that I am a spiritually progressive Democrat and fiscal conservative with a conscience and sense of history.

My Reasoning Why is addressed to my fellow Americans:

To ensure a strong national government requires spending cuts, increased tax revenues and growing our economy with global partnering and not in fighting wars and making adversaries.

The Clinton Administration reduced the federal deficit, overhauled welfare and presided “over the longest economic expansion on record with falling unemployment, rising incomes and improved competitiveness on the world stage. Moreover, as president and later as founder of the Clinton Global Initiative, he understands the politics and economics of globalization and the dynamics of the technological information age.

“But critics will argue that the deregulatory policies promoted by Mr. Clinton’s administration — under the treasury secretaries Robert E. Rubin and later Lawrence H. Summers — contributed to conditions that led to the Wall Street meltdown of 2008 and the subsequent recession.” [1]

Clinton admits that he can “be fairly criticized for not making a bigger public issue out of the need to regulate financial derivatives” and admits he “should have spoken out more, especially after Congress included a measure barring financial derivatives from being regulated as securities or commodities in an appropriations bill that passed by a veto-proof majority. In not doing so, I ignored one of my own rules: even when you can’t win, it’s best to get caught trying.” [Clinton, Page 41]

Clinton is indeed trying and in his book has outlined various ideas and strategies “to get the jobs engine going again and deal with our long-term debt problem.”

Clinton also speaks up for the need for intellectual curiosity, commonsense, creative imagination, confidence, cooperation and shared responsibilities; all which had been hallmarks of this nation that was founded by dissidents, radicals and revolutionaries.

The genesis of the Tea Party’s uncompromising ideology began with President Reagan, but Reagan also signed budgets that restored revenues lost to big tax cuts, including a bill that stabilized the Social Security system for twenty-five years by adjusting benefits and raising taxes.

Today many blame too much government for the current state of our union but Clinton explains that the financial “meltdown happened because banks were overleveraged, with too many risky investments, especially in subprime mortgages and the securities and derivatives that were spun out of them, and too little cash to cover the risks…there was not enough government oversight or restraint on excessive leverage.”

“Medicare and Medicaid have much lower administrative costs than private insurance companies. Led by for-profit insurance companies, our health-care system spends about eleven cents on the dollar more on paperwork and administration than any other wealthy nation. That’s more than $200 billion a year.” [Clinton, Page 44-45]

The last three decades of the antigovernment movement have been about antitax and antiregulation but not about antispending and so today foreign governments own more of our debt than Americans do.

Clinton writes, “From 1981 to 2009, the greatest accomplishment of the antigovernment Republicans was not to reduce the size of the federal government but to stop paying for it.” [Clinton, Page 35]

In a nutshell, the role of government should be about National Security such as utilizing diplomacy and not in seeking our will via threats and in the use of weapons of destruction. Government should assist those in need to receive adequate health care, food, shelter, and education and protect and advance the public interest that the free market can’t fix- such as clean air and water, safe food and infrastructures like roads and bridges.

Clinton wrote, “If you think to balance the budget, we should eliminate virtually all government departments, including the Department of Education, the Environmental protection Agency, the Labor Department and the Occupational Safety and Health Administration, the Securities and Exchange Commission, the Commerce Department, the Energy Department, and the national parks…you can be a leader in the antigovernment movement” but none of those cuts will bring down the debt that decades of tax cuts and over spending ran up, because that is not where the big money is!

Neither can big money be found in foreign assistance, which consumes around 1% of the budget.

It must be understood that more than 50% of foreign assistance never even reaches the people it is intended for and lobbyists work hard to help channel those funds through U.S. contractors who use it for overhead and administrative salaries.

It must also be understood that foreign assistance and military aid are ‘apples and oranges’ and “Any nation that year after year continues to raise the Defense budget while cutting social programs to the neediest is a nation approaching spiritual death.”-Rev. Martin Luther King, Jr.

The 2012 budget calls for $54 billion in federal loan guarantees for new nuclear reactors and $7.6 billion for nuclear weapons research and production.

The 2012 budget for the National Nuclear Security Administration calls for 7.6 billion for nuclear weapons research and production, which is 8.4% above 2011 and 19% above the 2010 budget request.

Funding for a new “Uranium Processing Facility” for production of thermonuclear secondaries at the Y-12 production plant near Oak Park Ridge, TN, will consume $160.2 million.

The 2012 budget request also creates a new Life Extension Program for the B61 warhead funded at $223.6 million, even though that gravity bomb’s original mission of forward deployment in Europe against a Soviet threat vanished at the end of the Cold War!

The Life Extension Program extends the service lives of existing nuclear weapons for three decades or more, in contradiction to our declared national security goal of a future free of nuclear weapons and it also endows our nuclear arsenal with new military capabilities. [3]

Life Extension Programs also undermine sound national security by introducing major changes to America’s existing nuclear weapons stockpile that had been extensively tested and known to be most reliable weapons of mass destruction.

“The dominant mission of Y-12 today is the production of new and or/refurbished thermonuclear secondaries for existing US nuclear warheads as part of the Stockpile Life Extension Program [LEP]. These include life extension upgrades to the W-76 that will result in the W-76 Modification 1, a warhead with new military capabilities.”[4]

“All W-76 and W-76-1 thermonuclear secondaries produced at Y-12 are designed and produced to unleash 100 KT of uncontrollable and indiscriminate heat, blast and radiation, six times more than the Hiroshima Bomb.” [5]

On 8 July 1996, the International Court of Justice issued this statement: “The destructive power of nuclear weapons cannot be contained in either space or time. They have the potential to destroy all civilization and the entire ecosystem of the planet.”

Also, from 2009 to 2018, the United States is scheduled to give the state of Israel $30 billion in weapons of destruction.

From a moral and financial perspective, we the people cannot afford to provide the state of Israel with weapons it misuses to sustain its illegal 44-years of military occupation of the indigenous Palestinians in the West Bank, East Jerusalem and Gaza Strip.

From fiscal year 2000 to 2009, the United States appropriated to Israel $24.099 billion in Foreign Military Financing, which is the official budgetary term for military aid.

The largest recipient of U.S. assistance is given to the state of Israel.
Using taxpayers money, the United States Government has licensed, paid for, and delivered more than 670,903,390 weapons and related equipment to Israel, valued at $18.866 billion through three major weapons transfer programs during those nine years.

Also during those years, Israel killed at least 2,969 Palestinians who had taken no part in any hostilities in the West Bank, East Jerusalem and Gaza Strip.

Learn how much your state provides the state of Israel and how those funds could instead be used for the greater good on this homeland @ http://www.aidtoisrael.org/section.php?id=379

To get US back to work in “the futures business” calls for telling the truth, creating jobs, raising incomes, balancing the budget, caring for the needy and making more partners than adversaries. And that requires an engaged citizenry with the political will that seizes our rights and holds “these truths to be self-evident: That all [people] are created equal; that they are endowed by their creator with certain unalienable rights…that, to secure these rights, governments are instituted among [people] deriving their just powers from the consent of the governed; and, whenever any form of government becomes destructive of these ends, it is the RIGHT of the people to ALTER or to ABOLISH it.” -July 4, 1776, The Declaration of Independence.
We currently live in a nation that favors powerful private interests, short-term gains and over-consumption. Clinton illuminates how these destructive trends began thirty-years ago and have brought US to the state we are in.

Common Sense comprehends that getting America out of its immoral debt will require more than as President Obama said “eliminating tax breaks for millionaires and billionaires, or for hedge fund managers and corporate jet owners, or for oil and gas companies pulling in huge profits without our help…we’ll have to make even deeper cuts somewhere else.”

That somewhere else lies in the Government Military Industrial Security/Surveillance Complex and dismantling that requires the political will which was first inspired by the revolutionary spirit of America’s forward thinking Founding Father:

We the people are suppose to be the government and thus it is up to US to rise up and take an active part in our government to ensure that future generations will have hope for a future of a more perfect Union.

1. Back to work has bill clintons ideas for america review