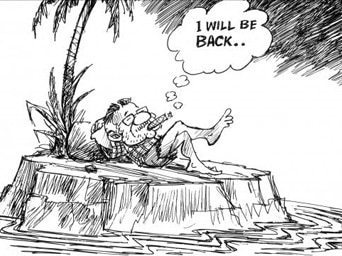 “Some live in fool’s paradise and think that they are indispensables.” Raja Mujtaba

Gen Musharraf came in the limelight when he was appointed Army chief by Nawaz Sharif in October 1998. He gained prominence when he launched the ill-conceived Operation in Kargil in summer of 1999 at his own, which led to ouster of Nawaz and take over by Musharraf on 12 October 1999. His Kargil venture and the coup launched by a group of general officers to dethrone a democratically elected heavy mandate government were illegal acts.

]During his over nine-year rule, Musharraf made many blunders but his biggest blunder was the sacking of chief justice Iftikhar in March 2007, which triggered lawyer’s movement. There on, his graph kept plummeting till he had to first shed his Army chief’s cap in November 2007 and handing over the baton to Gen Ashfaq Pervez Kayani, and then his president’s cap in August 2008 and paving the way for Asif Ali Zardari to replace him.

Zardari had secretly made an agreement with UK and USA not to impeach or try him and to provide him safe exit in return for helping him in becoming the next president. He had committed to his mentors that Musharraf would be given a choice whether to stay in Pakistan or proceed abroad and that he would be allowed to retain the Army House till the completion of his house in Chak Shezad and provided full security as long as he stayed in Pakistan. He was allowed to proceed abroad with full honours and to carry with him security guards including serving commandoes, personal assistant and a batman. He retained security staff for quite sometime.

During his rule, seven attempts were made on his life; two of which were deadly. He subverted the Constitution twice, which as per Article 61 of the Constitution is a treasonous act. He is accused of getting Nawab Akbar Bugti murdered in August 2006. An FIR to this effect has been registered in Quetta and based on the petition filed; the court has issued his warrants of arrest. Afghan Taliban must not have pardoned him for his betrayal. The Baloch and Pashtuns of FATA hate him since he had initiated military operations against them. Religious groups also bear a grudge against him since he had oppressed them. Victims of Guantanamo Bay Prison as well as family of Dr Aafia Siddiqui who had been handed over by him to USA cannot forgive him.

Sharif brothers also carry a deep rancour against him. Nawaz Sharif has not forgotten the humiliation he suffered at the time of his arrest on the evening of 12 October 1999 and his fifteen months lock up in Attock jail. He would like to reopen Kargil case, which he strongly maintains was undertaken by Gen Musharraf, Lt Gen Aziz (CGS), Lt Gen Mahmood Ahmad (Commander 10 Corps), Maj Gen Javed Hasan (Commander FCNA) and Maj Gen Tauqir Zia (DGMO) without taking him into confidence. During his meeting with Sardar Attaullah Mengal in Karachi on 19 December, in order to mollify the highly emotional and aggrieved Sardar, Nawaz vowed to address the injustices of Balochistan and to take the murderers of Akbar Bugti to task. It was an open threat to Musharraf, cautioning him to beware of the impending dangers he will have to face upon his arrival.

Irrespective of all the threats to his life, like Benazir he is also vying to return to Pakistan and try his luck in politics. It seems Musharraf has not learnt any lesson from the fate of Benazir. He is leading a comfortable life in London and receives heavy payments for his lectures in various educational institutes in USA and western countries. He has accumulated so much of wealth during his stint in power that he can live a lord’s life in London where he has an expensive flat in elitist constituency. The magnitude of his wealth can be measured from the fact that he managed to establish a political party which he has named as All Pakistan Muslim League (APML). He first announced to return back by 23 March 2012 but now has advanced his date to January. The APML will spend Rs117 million for publicity campaign to welcome him. Rs 629 million will be spent on transport and other arrangements for his public meeting upon his arrival. The reason why he is so keen to comeback is that the kind of perks and privileges he can enjoy in Pakistan are unavailable in the west.

The heat generated by political parties and growing demand for mid-term elections is a clear sign that 2012 will be election year. His fans have led him up the garden path that owing to poor performance of the present regime, he will receive a hero’s welcome on arrival. They rightly feel that in terms of governance, economic management, competence and results obtained, Musharraf’s rule was much better. However, they must bear in mind that the compromises he made to please USA impinged upon security and national interests and Pakistan is suffering on account of those secret agreements.

Great majority of people are of the view that Musharraf’s flawed policies and issuance of NRO to prolong his rule are responsible for the current deplorable state of affairs of the country. The NRO was issued by Gen Musharraf on 5 October 2007 as a consequence to a power sharing deal with Benazir struck in Dubai in July 2007 at the behest of USA and UK. Condoleezza Rice in his recently published book has given graphic details of her personal efforts in making the two agree to the deal. The NRO helped in absolving the top leaders of PPP and thousands of MQM leaders and party activists involved in corruption and heinous crimes, and in facilitating homecoming of Benazir in October 2007.

He must remember that ground situation has radically changed. In 2008, the grip of the US over Pakistan’s internal affairs was so strong that it had managed to influence the outcome of 2008 elections. Rating of the PPP and Zardari was high. Today Pak-US relations are at its lowest ebb and new terms of engagement are being formulated. PPP has become highly unpopular because of its poor performance and corrupt practices while Zardari has lost his credibility. He is under substantial strain since the Supreme Court is exerting pressure to implement its 16 December 2009 verdict on NRO and to revive money laundering cases pending against him in foreign countries. Memogate scandal is under purview of the Supreme Court, while Abbottabad Commission is investigating 2 May incident. Possibility of its linkage with memo affair is being determined.

Tehrik-e-Insaf (TI) under Imran Khan has emerged as a third force and well-known figures from all political parties are drifting towards it. Biggest defections are taking place from PML-Q in which APML had attached lot of hopes. Imran has become a leading crowd puller and seems to have outshined all politicians. If Musharraf thinks he will also be able to attract crowds like Imran Khan and will become as popular as him, he is sadly mistaken. Even PML-N is feeling threatened of TI. Under the changed circumstances and security threats, wisdom demands that Musharraf should postpone his arrival plan and let the tempers of his adversaries cool down. His recent demand for security guarantees from Pak Army is similar to the one made by Benazir Bhutto. If he comes in January, it means he has been cleared by the government and Establishment to create a bigger circus. Indications are that if TI performs well in Karachi on 25 December, the rate of defectors joining TI would accelerate which would further deepen misgivings of the old hands within TI.