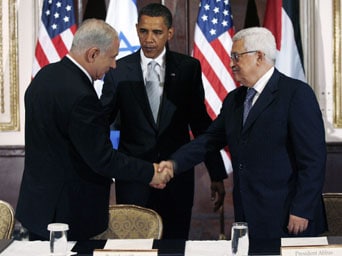 The other night I had late dinner with a friend visiting from out of town. I went home and crashed after a long day. What a night it was—I had America’s nightmare!

I had America’s nightmare when I dreamt that Israel agreed to vacate the Jewish Occupied West Bank ending its reign of terror withdrawing its army and its armed terrorists settlers.

I had America’s nightmare when I dreamt that Israel agreed to end its illegal and criminal siege of Gaza.

I wasn’t worried about Israel and its citizens because I knew they would be fine in peace.

No, instead I was worried about the American Jewish leadership and community, and how they would manage a world with Israel at peace!

I wondered what would happen to all those American politicians who take the mandated pilgrim to Israel before running for a national office, to put on the yarmulke and pledge allegiance to Israel First. The American politicians who visit Yad Vashem and pledge unconditional financial, military and political support to Israel, while perpetuating the Holocaust Industry to justify criminal policies against the Palestinians.

What will happen? What will happen to a free and once again, independent America that is a master of its own destiny once more? Will its national politicians and political candidates and key media personalities learn to live with self-respect once more?

In my dream, I really felt sorry for Israel’s friends in the US, for the Jewish lobby, for the Jewish leadership and community, and I wondered what these folks will do now that Israel is at peace with itself and with its neighbors?

I wondered what would happen now that the Jewish community and the Jewish millionaires will stop funneling tens of millions into AIPAC in support of its foreign and domestic agendas? What will happen to AIPAC now that Israel is at peace, safe and secure? What will it market and sell to its members now that Israel is at peace? Perhaps marketing kosher hotdogs to compete with the ones offered at Price Club for $1.59? I began to cry for them out of sorry and pity!

Tears poured from my eyes as I contemplated the fate and fortune of these pandering politicians who put Israel First and America Last! I wondered…could these politicians even think on own without getting instructions from AIPAC and its army on Capital Hill?

I wondered…could these politicians re-learn to put America First? I felt pity for these new orphans as they found themselves without sponsors and without masters.

I cried out of sheer pity for the likes of Alan Dershowitz and wondered what this Harvard law professor will do now that he no longer has a cause to profit from? I wondered if he would now take on the US administration and the National Defense Authorization Act, which allows the military to detain without charges and trials “terrorist suspects”.

I felt even more sorry for Daniel Pipes (he believes Barack Obama is a closet Muslim)— the man who made a name for himself by spreading lies and false claims to demonize Arabs and Muslims. I wondered…how could he continue to fund his organization Middle East Forum and his campus spy network Campus Watch?

I felt much sadness as I wondered what would happen to the likes of Steve Emerson and his Investigative Project and Robert Spencer of Jihad Watch. I felt sorrow as I wondered what would happen to Rita Katz and her SITE Intelligence Group. What will happen to the Zionist Organization of America, the American Jewish Committee, American Jewish Congress, and Center for American Progress, CAMERA-Committee for Accuracy in Middle East Reporting in America, and the many who made Islamist terrorism a thriving business for themselves and their cause, Israel?

My God, I wondered what would happen to the man, Dennis Ross who did everything in his power to make sure peace could never take place. My God I thought how would the Washington Institute for Near East Policy stay in business churning policy decisions for American administrations, one after another?

I could not help but remember, almost with fondness, Abraham Foxman and his Anti-Defamation League…what will he do now? Will he and the tens of thousands involved in the ‘Israel First’ Industry do with themselves? Will they join the tens of millions of Americans who lost their jobs because their country did not have enough money to spend at home, but somehow came up with trillions to spend abroad on Israel’s wars?

America’s nightmare was like no others I ever had. I felt sick for the American Jewish leadership that no longer has a cause to sell—that no longer utilizes its hate factories for Arabs and Muslims. I thought, Abe Foxman will always have a special place in my heart…after all he is such a lovable guy.

Then I remembered the Evangelical Christian Zionists and their agenda for Israel, for the Jews and for the Palestinians. What would happen to their Armageddon and their expectation of death or conversion of the Jews and ethnic cleansing of Palestinians? And I wondered if Pat Robertson and John Hagee would now spend the troves of money they have collected on their own community since they can no longer spend it on Israeli settlers. And of course I wondered if Jesus Christ will continue to make his weekly visit to Pat Robertson at his mansion in Virginia Beach for a chat and advice on the affairs of Christianity (Robertson claimed Jesus makes frequent visits with him).

I woke up startled and realized that Israel at peace is an industry that simply will not disappear. Israel is an American industry that is just too big to fail. With Israel at peace, too many names and organizations would disappear; too much money would disappear from election campaigns. America and the mainstream media would have to learn and discover that America should be First. That America and its people deserve the priorities they gave up for so long in favor of putting Israel First.

And then I said to myself there is no way. There are too many people, too may organizations, politicians feeding and profiting…too many Wall Streeters and Ponzi schemers, it is not Israel they all care about, it is the power and influence over America what drives the industry called “Israel First”.

I went to the kitchen to make my morning coffee, and after the second cup, I understood why there is no peace in the Middle East.

There would just be too many losers in America, with Israel at peace.