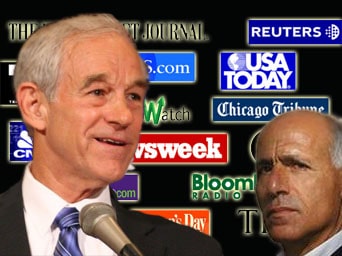 One week before the Iowa caucus as Ron Paul’s poll numbers are surging, the Media’s scrutiny is focused on the contents of an “investment newsletter” that Paul produced and profited from back in the ’80s and ’90s. Entitled the “Ron Paul Investment Newsletter” or the “Ron Paul Survival Newsletter” it also contained a series of racially biased attacks.

Paul maintains he didn’t write the pieces but The Washington Post is running a series of four columns this week examining “how factual Rep. Ron Paul (R-Tex.) has been in describing his career in politics” entitled Fact Checker: Ron Paul and the racist newsletters. I posted a few comments, beginning with this one: 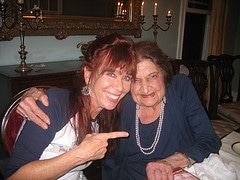 Google “The Serial Hypocrisy of The Media vis-a-vis Ron Paul and Mordechai Vanunu” which is the first in THAT ongoing series!

PS: The photo is of me and ‘retired’ as in fired White House Correspondent Helen Thomas. Goggle “An Evening with Helen Thomas and Flashback to John Lennon and Vanunu Mordechai” for the first in THAT ongoing series.

Time will tell if WaPo will follow that lead and another comment that led to Back to Ron Paul, The Media and Mordechai Vanunu
Read more…

eileen4HOUSE2012 It is lame to wish you a Merry Christmas when I wish you a FINAL Christmas in a place that is not home to you and decades more in full freedom, health and happiness.

“The ‘Serial Hypocrisy’ of The Media vis-a-vis Ron Paul and Mordechai Vanunu” has spread to multiple pages on a Google Search and i think mostly because many Americans are favoring Ron Paul for president. So my next step is try to reach him and remind him that in 1996, 36 congressional reps stood up for Vanunu’s freedom because “we have a duty to stand up for men and women like Vanunu who dare to articulate a brighter vision for humanity.”

My Letter to Ron Paul:

I am seeking your response to the following to be published in a series regarding The Serial Hypocrisy of The Media vis-a-vis Ron Paul and Mordechai Vanunu.

In April 1999, thirty-six members of the House of Representatives sent a letter to President Clinton regarding the incarceration of Israel’s nuclear whistle blower because they believed “we have a duty to stand up for men and women like Mordechai Vanunu who dare to articulate a brighter vision for humanity.”

Were you one of the 36 congressional representatives who signed that letter?

Will you also comment regarding what Vanunu told me in 2005:

If you were President what would you do?

Thank you for your consideration and most sincerely all the best,

Eileen Fleming, Citizen of CONSCIENCE for House of Representatives 2012

Founder of WeAreWideAwake.org Staff Member of Salem-news.com
A Feature Correspondent for Arabisto.com and Columnist for Veteranstoday.com

ENCLOSED: a copy of BEYOND NUCLEAR: Mordechai Vanunu’s FREEDOM of SPEECH Trial and My Life as a Muckraker: 2005-2010

Vanunu addressed The Media just prior to being sent back to solitary confinement for 78 days in the summer of 2010- the outcome of his freedom of speech trial and essentially punishment for speaking to foreign media in 2004 after he emerged from 18 years in a windowless tomb sized cell for telling the world the truth about Israel’s 7-story underground weapons of mass destruction facility at the Dimona plant in the Negev Valley: