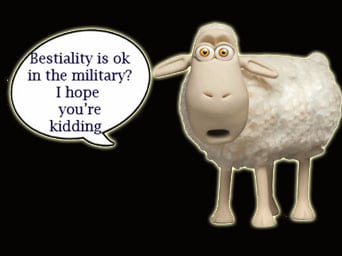 On December 31, 2011, Obama signed the NDAA, codifying into law for the first time in American history that the military can imprison citizens or non-citizens indefinitely, inside or outside the United States, without charges or trial.    (Source: American Civil Liberties Union)

This obscene bill was the work of the US Senate. Every Senator who voted for it needs to be tried for treason, convicted, and hanged by the neck until dead. The President who signed it, with reservations, should get off with a lighter sentence. Like maybe a firing squad – or if we’re feeling really merciful, a lethal injection.

But until that happens, I figure I’ll just make the best of the situation. A couple of weeks ago, as my readers know, I turned myself in for indefinite military detention. I figured it would be kind of cool to have a Marine Corps marching band playing “Halls of Montezuma” as they kicked in my door and dragged me off to a sparkly-new Haliburton detention camp.

But now I’m rescinding my offer. In another email to DHS,* I have explained why: I don’t want to be indefinitely detained by a bunch of sheep-schtuppers.

For the Senate, in its infinite wisdom, not only has unleashed the military against dissidents – but also against household pets:

Senate Repeals Bans on Sodomy and Bestiality in the Military
The U.S. Senate voted Thursday to approve a defense authorization bill which included a provision that not only repealed the military ban on sodomy, but also repealed the ban on having sex with animals — or bestiality.

I wonder which Senator wrote that part of the bill.

I wonder what kind of blackmail videos the Mossad has on that Senator.

I wonder whether that Senator’s preference is for birds, mammals, amphibians, insects, or reptiles. (My guess would be reptiles…with giant cockroaches a close second.)

I realize the US Senate is full of the sickest and most corrupt people on God’s green earth. I realize these guys wallow with pigs and other less hygienic creatures on a daily basis. I’m a tolerant guy – I don’t waste my time worrying about who’s screwing who, or what.

But when US Senators decide to enforce their predilection for having sex with animals on our brave men and women in uniform, that’s where I draw the line.

When the US Senate sends the military into the US heartland to “disappear” citizens into concentration camps – AND WHILE THEY’RE AT IT, TO RAPE OUR HOUSEHOLD PETS, and for all we know the rabbits and squirrels and other innocent animals in our neighborhoods – I say it’s time to rise up in revolt.

So I have rescinded my offer to be indefinitely detained. And I have informed DHS that I will be purchasing the highest-power weapons legally available, stocking up on ammunition, and getting ready to defend the dogs and cats and rabbits and squirrels of my neighborhood against the threat of rape by uniformed perverts sent by the traitors in the Senate.

Though frankly, I’d rather use my guns on those treasonous, animal-raping Senators.

So listen up, Senators: If I ever catch any one of you in the act of screwing a helpless, innocent animal, I’ll blow your filthy head clean off.

And as for that little matter of treason…well, we’ll deal with that when the time comes.

The letter below was sent to the Department of Homeland Security via the form at http://www.dhs.gov/xutil/contactus.shtm

I am hereby rescinding my offer to be indefinitely detained by the US military under NDAA.  While it is one thing for US troops to violate their oaths to the Constitution by disappearing US citizens without charges, it is quite another thing if the troops in question are serial animal rapists (like the Senators who voted for NDAA).

I do not wish to be indefinitely detained by people who have sex with pigs, monkeys, monitor lizards, giant cockroaches, or other animals.

If you have already sent a Marine platoon full of perverts to detain me, please contact them immediately and rescind my detention orders.

PS  I understand that you bloodsucking imbeciles and parasites at DHS probably also screw animals, having nothing else to do all day, given that 9/11 was an inside job and the “terror threat” is so statistically insignificant as to be meaningless. If so, I urge you to put down that tortoise, think hard about what you are doing, and consider resigning and getting a real job.