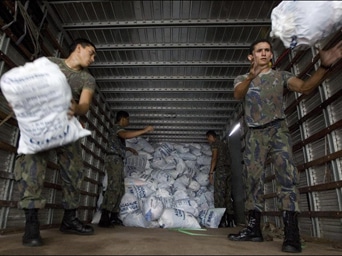 Call it the Pentagon-zation of U.S. foreign assistance.

by David Wallechinsky and Noel Brinkerhoff/ All Gov

When some Americans complain that foreign aid is wasting taxpayer money abroad that could be put to better use at home, they may not realize that today’s version of foreign aid isn’t what it used to be. Call it the Pentagon-zation of U.S. foreign assistance.

Until a few years ago, the State Department was the leading U.S. government agency when it came to doling out foreign aid. But beginning in the second term of George W. Bush’s presidency, and continuing through the Obama administration, the Department of Defense has surpassed the State Department in supporting foreign initiatives, most of which have been military oriented.

For the past two years, the Pentagon has been given $10 billion more than the State Department for foreign aid projects. With $17 billion, Defense officials plan for the coming year to invest in foreign military and police training, counter-drug assistance, counterterrorism activities and infrastructure projects, among other programs,.

Among the expenditures included in the recently passed 2012 National Defense Authorization Act are $1.1 billion to the government of Pakistan for alleged counterinsurgency efforts and $415 million for two programs known euphemistically as the Combatant Commander Initiative Fund and the Commander Emergency Response Fund. Translated into everyday English, this means cash that can be handed out by U.S. commanders.

Gordon Adams of the Stimson Center told iWatch News that by shifting foreign aid to military programs “you end up strengthening those instruments which are least democratic fundamentally.”