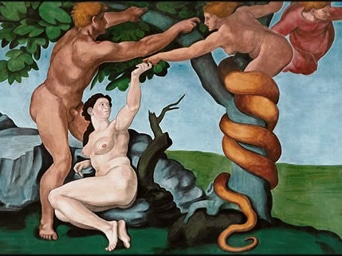 In Holy Writ, the Torah got it right, the Talmud mucked it up and the New Testament should have ended/fulfilled the story. So, who is at fault?

While striving to bring the concept of “Original Sin” into a modern, rational perspective, I had to glean data from our Western Civilization’s three written authorities on the subject—Old
Testament or Torah, Talmud and New Testament.

I have settled on my own version, but I now say, unequivocally, that views propagated from the Talmud are where most confusion, wars and disgusting racism inseminates.

Before anyone starts bellyaching about Buddha and the alleged wisdom from the East, know that I’ve been there, done that and still found myself spinning around in the great dark paper bag; except for one thing—if I spin enough in quiet, calm meditation; after umpteen rounds of existence, I get to be a part of the bag, maybe.

As for Hinduism, its as racist and self-adsorbed and goofy as Talmudic Judaism.

The “Torah” is acknowledged as the old testament, and provides legends, tales, myths, similes, and analogies to explain the whole of Creation, and why we humans get to play the starring roles in the many acts of history.

Millions of people of every stripe, including some exceptionally gifted thinkers, believe the general outline said to have been written by Moses taking the story from God, called “revelation” which is the only way the story could ever get out of the huge paper bag.

We all have the choice to believe, or not with “free will” which I see as one of the big three among qualities of Mind—the other two being consciousness and conscience—reason is overrated by Egoists, who seem to think they have a handle on spinning in the bag.

Enough already! The story behind this thing called sin is told confusingly in the Torah, regardless the myriad language translations: in a nutshell millions believe that God set up a Utopian garden called Eden where he placed the first humans that He created from dirt; including Adam and Eve.—The first couple. Don’t quibble—this is my version. I only recently heard about Lilith, whose name is found only once in the bible; but is the subject of many fantasy yarns, thanks to Talmudists.

Enter sin, like a predatory animal, crouching at the door, a warning. And here we sit, like spectators in a drama we have seen many times before, knowing what is to follow, yet not being able to influence the outcome, not being able to forestall the inevitable.

God warned them not to eat of the fruit of the best tree in the Garden, lest they would come to “Know” good and evil. Apparently the first couple in this perfect Creation had it made, but the temptation to reach for more was too great, and Shazam! They were naked, suddenly, and they “Knew” evil.

Now we all should know there is a big difference between information and knowledge; God didn’t tell them they would know about, or get information about evil; but that they would Know evil.

Evidently there is a big difference between knowing and knowing about. Because it looks like nobody dodges the symptoms. Besides, one of those Torah prophets said clearly that no man is good (without sin), non, nada, zilch.

To me, it is patently absurd to link sexual procreationto evil, and it takes twisted thinking to do so. Humans can surely pervert the drives and processes, but sex itself is no more evil than money, or guns.

The other part of the stupid bargain was said to be that by knowing both good and evil, Adam and Eve would “become as Gods” or would rise to a position equal to or well beyond their Creator. (I call this the “birth of chutzpah.” But that is only partially right, the Great Chutzpah part comes a tad later with the Talmudists.)

The Torah stories were edited and redacted by later Talmudic experts into the worst hodge-podge of human imagination possible; and therein I see the “root of all evil.” I offer a good example of this later. In the Talmudic version of why Cain killed his brother Abel.

According to the Torah prophets, humanity, after some harrowing events at the hand of a pissed-off God, were going to get the opportunity for Redemption coming in the advent of the fullness of God on earth—Jesus Christ, and all folks needed to do to get back on track was to hear and believe. At last, something genuine offered a way for people to stop hopelessly spinning in the bag and get somewhere.

Believing, it turns out, is not so easy for millions of “thinking” humans to do. So instead of taking up the offer—smartasses and other”experts”everywhere started bickering over non-essential details. And we have been at war, insanely, ever since. All part of Original Chutzpah.

The wisest of the wisest Rabbins actually believe that humans have been smarter than God, and most of what God said and did wasn’t kosher, so they need to set Him straight—read it for yourself here: Judaism’s Strange Gods; A Review So, there you have it the “original “ chutzpah.

The Talmudists said that Cain slew Abel in a battle for which of them gets to screw their mother (Lilith, not Eve). Thus we have the original Mfers.

Only in minds that inspired Freud, Oy!

Have you heard that before? I hadn’t. (ref.—“Lilith’s Cave ; Jewish tales of the Supernatural.”)

As, my father used to say whenever things got a little hairy out on the water in those tiny boats: “Ain’t we got fun, Tommy!”

Yep, I would say we sure as hell have fun happening, and we should know who and what started it.

Read: The Knowledge of Good and Evil