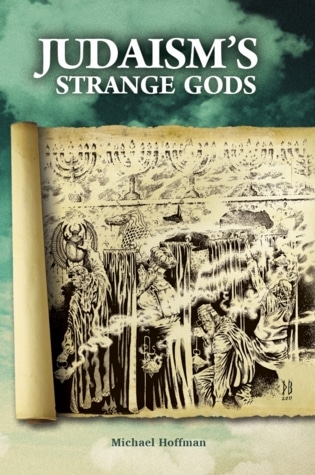 New release, by Michael Hoffman available on Amazon. com under $15.

If someone other than a committed Christian had written this book, it would have been another Christian rant against Jews for their historic hatred of Christ, but Hoffman shows that he is not hateful, nor spiteful as he exposes the ingrained racism and exclusionist foundation set up by the Pharisees.

This revised edition of “Judaism Discovered” is downsized for better marketing and easier accessibility than the huge original hard cover edition, yet nothing is missing in the text.

The religious convictions of Talmudic rabbinical Judaism is at the crux of modern histories’ perpetual conflicts, expressed thoroughly by Douglas Reed in his book ‘Controversy of Zion.’ Controversy of Zion Tragic History

Hoffman not only describes what the Talmud teaches, he documents every word of it from the work itself, yet his editorializing does not call for hating or exterminating Jews, even though the Talmud calls for death to all “am Haaretz” the world over.

Instead this courageous and scholarly revisionist author takes the traditional route of the early Christian leaders, who warned against ’the leavening of the Pharisees’ yet preached that Jews should convert to Christ, for salvation.

Hoffman points out that anyone today may enter a Christian book store and find all kinds of books critical to the point of libel and slander against Islam, but nary a word critical of Judaism.

Why should Americans read this book? Because we are too ignorant of history and geopolitics to really understand how our “Christian nation” (not) gradually became a bastion of Zionism.

Many visceral “jew haters” will say that Hoffman is too easy on them. But such would be blind emotion just pissing into the wind against the documented facts being exposed.

The reader will be ushered into the milieu of modern Rabbinical fanatism erupting in Israel, and exposed by the Jewish press for the racial hatred it is, Talmudists really do not cotton to Jews who reject the Talmudists.

The Talmud has been exposed for centuries because it contains vile representations of Jesus Christ in the most deliberately vile blasphemous language anyone can imagine. Hoffman covers much more than the Christ blasphemy, he documents how the “oral tradition” which Jesus railed against, blashemes God and Moses as well—the original hutzpah.

VT readers have surely heard that as non-believers in this chutzpah, they “have no souls” and are beneath animals. Now you can learn which “sage” made such statements and when they were published.

No wonder the Zionists in Banksterland have no shame nor conscience, their racist, Godless religion pounds it home that the rest of humanity is utterly worthless.

Hoffman, to his great credit, does not suggest we get even, he seriously hopes that such “Jews” can open themselves to Christ and rejoin humanity.

This work is a lesson in every way.