Home Government No More Business As Usual With USA 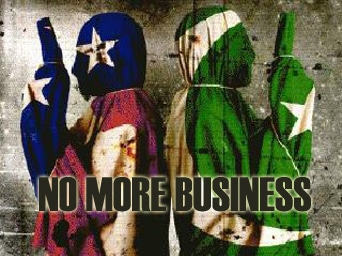 When the US decided to invade Afghanistan and topple Taliban regime led by Mullah Omar since it had refused to hand over Bin Laden suspected of being involved in 9/11 attacks, all the neighbors of Afghanistan including near neighbors supported USA. Among the immediate neighbors, Pakistan was the only country which enjoyed cordial relations with Taliban but still decided to go along with the decision of the international community. Even Russia, China and Iran antagonistic towards USA didn’t raise any objection. The reason was that all the regional countries were averse to extremist policies pursued by Taliban regime. It’s Sharia based ideology had become a threat to the six Central Asian Muslim Republics ruled by secular leaders, Russia, China and Iran. Islamic movements in Uzbekistan, Turkmenistan, Tajikistan and Xingjiang had drawn inspiration from Afghan Jihad and Taliban movement.

Iran was averse to Sharia based ideology of Taliban since it posed a challenge to export of Shiaism in the region. At one stage, Iran had deployed its forces along eastern border and had threatened to attack but backed off when Mullah Omar warned that Iranian military would get stuck in the glue of Afghanistan. Like Pakistan, Tajikistan and Uzbekistan provided airbases to USA. India was most affected since the Taliban had almost wiped out its influence in Afghanistan and was desperate to regain its lost influence and thus gain entry into mineral resources rich Central Asia.

While all the regional countries had welcomed the US military action in Afghanistan, except for Karzai regime and India, all other countries now want the US led forces to pack up and leave. At the same time, none other than Pakistan want the Taliban to regain power. Even the US which is desperately trying to convince the Taliban to sit and talk wants them to share power with Northern Alliance as junior partners. Pakistan is an exception since it has suffered so grievously at the hands of Northern Alliance heavy Kabul regime that it strongly feels that Afghanistan under Taliban would prove to be a much better neighbor. Pakistan under no circumstances can afford to have hostile eastern and western borders.

The Taliban also know that they are friendless and the only country which has some soft corner and human feelings for them is Pakistan and none else. Although Pakistan played a deleterious role by assisting the US to forcibly topple an elected government in Kabul in November 2001 and till late November this year it was providing logistic supply routes to NATO containers, yet the Taliban are somewhat malleable towards Pakistan. They understand that Pakistan had no choice but to comply with George W. Bush’s dictates. They also appreciate that people of Pakistan have suffered a great deal on account of war on terror and that great majority dislike USA and sympathize with the cause of Taliban. It is in the wake of these varying impressions that the Taliban distrust all but they may listen to Pakistan to talk and work out a negotiated political settlement. They know that Pakistan has hardly any friend among the stakeholders in Afghanistan and others that are trying to broker peace.

So far the Afghan Taliban were rejecting the US dictated three-point peace formula and insisted that all foreign forces must quit to allow the Afghans to decide their own future. The Taliban demand release of their five prisoners held in Guantanamo Bay. Their representative was not invited to Istanbul and Bonn conferences because of which the meetings proved inconsequential. Taliban have now agreed to open their political office in Qatar which is seen by western officials as a step towards reaching a negotiated political settlement. Afghan government and Afghan High Peace Council have welcomed it and said they have no objection to the Taliban-US getting engaged in diplomatic parleys. The US which till recent considered both al-Qaeda and Taliban as foes has now amended its stance by asserting that Taliban is not its enemy. In its keenness to expedite the process of reconciliation and early settlement, it may agree to release the prisoners to make the Taliban soften their stance. Sensing a change in atmosphere, a delegation from Hikmatyar’s Hizb-e-Islami met Karzai in Kabul.

The Taliban in Pakistan who have sworn allegiance to Mullah Omar as their supreme leader would stop hating Pak Army the day they are convinced that that it is not fighting America’s war for dollars. They admire the valor and determination of Army soldiers and grudgingly admit that they are tough opponents. They have also learnt to their surprise that both officers and jawans are God fearing Muslims. The stiff stance taken by the Army and ISI in the face of America’s belligerence has brought a slight change in their perception and attitude and they are actively thinking of coming to terms with the Army.

Maulvi Faqir, commander of Taliban chapter Bajaur who is now based in Kunar after he and his militants were shunted out from Bajaur by security forces in 2009 has expressed his willingness to negotiate on Pakistan’s terms. This offer was made in the wake of decision taken by the resolution of the two Houses of the Parliament that dialogue with Pakistani Taliban should be initiated and also after seeing that security forces had started defying the US. On the eve of New Year, Mullah Omar issued a leaflet in North Waziristan (NW) directing Afghan and Pakistani Taliban and other affiliated militant groups to stop their fight against Pak armed forces and refrain from killing innocent people in Pakistan. He urged them to forge unity for a single cause and to focus attention against ISAF in Afghanistan since the war was in a decisive stage.

He expressed his displeasure over suicide attacks, kidnapping for ransom which he said were un-Islamic practices. A five-member Shura comprising members from various groups including Hakimullah Mehsud’s TTP, Maulvi Nazir’s group in South Waziristan (SW), Hafiz Gul Bahadur’s group and Haqqani network in NW has been formed to ensure stoppage of un-Islamic practices and to punish the guilty in accordance with Sharia laws. Hakimullah who is finding it exceedingly difficult to keep his sub-commanders under his control after his ouster from SW, agreed not to target innocent civilians but said suicide bombings and fighting against security forces would continue. Jamaat-e-Islami chief Munawar Hassan has exhorted Gen Kayani to hold dialogue with Taliban particularly when the US was holding dialogue with Afghan Taliban. He and Maulana Fazlur Rahman pressed the government to stop toeing America’s line and strive to enhance Pakistan’s prestige. Imran Khan who is riding the crest of popular wave has promised to make Pakistan an Islamic welfare state.

In 2010, violence was at its peak. 10,003 fatalities took place in that year. 2011 saw a decline in terror related incidents as well as in drone strikes and casualties which dropped to 7,107. Total of 2985 violent incidents of all sorts took place last year as compared to 3393 in 2010. FATA was the most affected area followed by Balochistan and Khyber Pakhtunkhwa (KP). Fatality toll of 820 in KP in 2011 was the highest. 300 suicide attacks have occurred since 2004 and in this highest rate was in 2009. While the security forces remained committed in all the agencies of FATA and some parts of KP in 2011, their heaviest involvement against the militants was in Mohmand, Orakzai, Kurram and Khyber Agencies. All told, 144 attacks were launched in which 1016 militants were killed, 4219 arrested and 279 surrendered. 57 teenagers trained by Swat militants under Fazlullah to become potential suicide bombers have been rehabilitated by Mashal Institute opened by Army in Swat.

Politically motivated target killings in Karachi that had peaked in 2011 were brought under control in September after the intervention of Supreme Court and grant of police powers to Sindh Rangers at the behest of Gen Kayani. In Balochistan, the Frontier Corps has managed to keep the Baloch separatists on the run without launching any operation while the Army has kept itself aloof and is concentrating on development works in interior Balochistan including enrolment of Baloch youth in Army and converting Sui town into an educational city. Likewise, development works in war affected SW is going on under the direct supervision of Army. After inauguration of Wana Cadet College, another one will be launched in April this year in Spinkai Raghzai. Mohmand and Bajaur Agencies will also have cadet colleges.

Troublesome regions in Upper Orakzai and Central Kurram Agencies are being cleared of the presence of militants and substantial progress has been achieved. As a consequent to sustained efforts of security forces, incidents of terrorism in urban areas have almost ceased. Since the closure of NATO supply lines in reaction to Salala attack on 26 November, no drone strike has occurred. Visits of hard nose intrusive American officials have terminated and the people have not heard the nauseating do more demand for the last six weeks. While Pakistan is restructuring its foreign policy that had been tailor made to suit American interests only, the US is striving to normalize Pak-US relations but there will be no more business as usual. Process of peace with Pakistani Taliban should be given a push to end the self-destructive war on terror.

Asif Haroon is a retired Brig and a defence analyst. Email:[email protected]