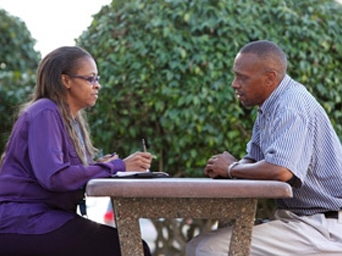 The act of being able to wake up in a warm bed, next to your spouse and then go to work is considered by some people to be ordinary, but not for Veteran Mark Galloway.  For him, having any kind of “normal life” is extraordinary; because it’s something he’s had to build for himself over the last six years.

At his all-time low nearly a decade ago, Galloway was newly divorced and living on the streets of Los Angeles.  His only places to sleep were on sidewalks and buses.  The only places to clean up were in fast food restrooms.  For years, he found himself surrounded by the same bad influences, caught in a downward spiral of intoxication and bitter hopelessness.  Then one day in 2005, his girlfriend became pregnant with his child, and Mark knew he needed to clean up his life.  He boarded a bus to San Diego with the promise of standing on his feet again financially and supporting his soon-to-be born child.

In San Diego, he connected with VA San Diego Healthcare System and learned about the Department of Housing and Urban Development/Veterans Affairs Supportive Housing Program (HUD-VASH), which offers affordable, supportive housing to Veterans who are trying to get on their feet.  Where he once found himself fighting for something greater for his country, he was now inspired to fight for his own well being.

Veterans under the program are assigned a case worker by the VA who not only follows up on Veterans but also assists them with issues such as money management and supporting the recovery process.

“My case worker is everything to me,” said Galloway.  “She has checked on my wife when I wasn’t there.  When I miss a meeting, she calls me in immediately. She’s like a big sister who won’t let me stop.  Sometimes, I fall back into that mentality like I can’t make it, and she listens to my problems and pushes me to fight for myself.”

While Galloway had found affordable housing through HUD-VASH, his next step was to concentrate on finding a job. This would be his biggest challenge. For every place he went looking for work, rejection followed.  While temptation was high to give up, he remembered where he had came from, and found strength through his wife and case worker.  He would keep on fighting.

After two years looking for full time employment and six months volunteering at the VA Medical Center in La Jolla, Mark found what he wanted the most in life: a full-time job as a nurse’s aide with the VA.

Where he once lived in tented surroundings with residents who stood in lines at every meal, Mark is now married with children; has a good place to live and a job.  Armed with a mantra that has carried him out of despair: “My time is coming,” he has redefined his life for the better, and hopefully, forever.