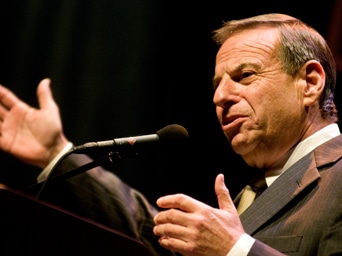 Victims in connection with America’s spraying of Agent Orange during the American War in Vietnam must be assisted more, especially from the US side, US Congressman Bob Filner said in Hanoi Monday.

He said this during a meeting with representatives of the Vietnam Association for Victims of Agent Orange/Dioxin (VAVA) in Hanoi.

He said he was moved when witnessing the Vietnamese dioxin victims still living in pain, especially children.

He added the US should not forget a fact that Vietnamese dioxin victims are living in pain due to America’s spraying of Agent Orange during the war.

VAVA chairman Nguyen Van Rinh said that valuable assistance to the victims had come from international friends, including the American people, thanks in particular to Filner’s efforts.

Last July, Mr. Filner introduced an act to the US House of Representatives which would have, if passed, assisted Vietnamese victims.

Mr. Rinh said VAVA hoped the bill would soon be passed so that both Agent Orange victims on both sides of the Pacific Ocean could receive adequate compensation.

Mr. Rinh also said the association hoped Mr. Filner would continue his appeals to the US government for any budget for Agent Orange relief efforts to be directly sent to the Vietnamese Government.

He added VAVA also hoped the US Government would make more efforts in assisting Vietnam to clean up dioxin hot spot.
VAVA is not only concerned about victims in Vietnam, but also victims in all other countries, including American veterans, said the association chairman.