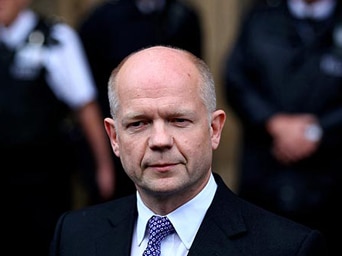 Britain’s foreign secretary William Hague is taking a long time to answer the sort of questions he must have mulled over before starting this country along another warmongering road to hell.

So I’ve sent my MP, a Foreign Office minister as it happens, yet another signal…

I wrote to you a month ago asking for an explanation from Mr Hague for his hostility towards Iran and requesting concrete proof of Iran’s military application of nuclear technology. I have not received a reply.

Mr Hague was also asked, since he is so bent on ratcheting up sanctions clearly intended to cripple the Iranian economy, whether Her Majesty’s Government had so easily forgotten the misery and deprivation inflicted on civil society, especially children, during the 12 years of sanctions against Iraq before that country was reduced to rubble on false pretenses?

I was also curious to know why he’s not more concerned about Israel’s nuclear arsenal, the threat it poses to the region and beyond, and the mental attitude of the Israeli regime. Why hasn’t he sought sanctions against Israel for its refusal to sign up to the Nucllear Non-Proliferation Treaty or engage constructively on the issue of its nuclear and other WMD programmes?

And aren’t sanctions long overdue for Israel’s repeated defiance of international and humanitarian laws in the Holy Land?

What threat is Iran to Britain? How many times has a British foreign secretary visited Tehran in the 32 years since the Islamic Revolution? Did Mr Hague make amends for this dereliction of diplomatic duty before embarking on his campaign for “an intensification of the economic pressure”, which many see as fateful step towards the war with Iran that Washington’s neo-cons have been cooking up for some time?

Has Iran wronged Britain? Actually it’s the other way round. The British Government has been a menace to Iran ever since it took a major shareholding in Anglo-Persian Oil in 1914 and swindled the host country out of its fair share of the profits. Worst of all was Britain’s abominable conduct towards the Iranians in 1951-53, when a previous Tory government sabotaged their democracy and created the circumstances that eventually caused the Islamic Revolution of 1979. The present-day Tory Government, instead of straining every sinew to pave the way for trade and co-operation in order to influence the Iranian leadership, is spoiling for another fight.

Please tell us: is Her Majesty’s Government going to send our young men (and women) to die in Iran for Israel?

In 2001 Jack Straw was the first British foreign secretary to visit Tehran in the 22 years since the Revolution. The Israelis made a big fuss, complaining that his trip was “sticking a knife in Israel’s back”. Am I right in thinking there has been no top level face-to-face contact since 2003 and that the Foreign Office has been more concerned about what Zionist extremists might say than winning the prize of good relations with Iran?

This latest escalation of hostility cannot possibly be in the British interest. Mr Hague’s job as foreign secretary is to make friends for Britain not enemies.

“The EU must this month decide whether to collude with the US in this dangerous game and ban Iran’s oil exports,” he says. “This sabre-rattling – in the midst of a recession – is beyond stupid. No one has seriously doubted that Iran’s government, surrounded by nuclear-armed or nuclear-allied powers, would one day seek a similar capability.”

The Government claims tougher sanctions will “hasten Iran’s economic collapse and deepen rifts within the regime, in the hope that saner voices will deem the price of pursuing nuclear weapons too high”.  But sanctions do not initiate such a process, says Jenkins. “They just build walls…  The idea that any nation becomes more malleable when threatened from outside is absurd. Economic sanctions are coward’s diplomacy…. merely a low-risk way of bullying the world…

“As for rattling a sabre whenever Washington says so, that is the most humiliating idiocy.”

Declassified documents show how Washington’s Dirty Tricks department, way back in the 1960s, was dreaming up evil schemes to provoke military intervention in Cuba. They created false pretexts such as staged catastrophes and false-flag incidents that would inflame public opinion and be blamed on the enemy. The US was prepared to go to extraordinary lengths and great expense to bamboozle the world into believing that Cuba was committing hostile acts against the US, thus providing “justification” for US military action.

Nothing changes. How often have we seen this same contemptible game played out by the US and Israel – and regrettably Britain – to start unjust wars?

Messrs Hague and Cameron both voted enthusiastically for the Iraq war, a decision of staggering irresponsibility based on neo-con lies. The cost – in lives, ruination and destruction – has been horrendous. The loss of respect for Britain is probably permanent. What possessed them to support taking us to war on trumped-up intelligence and inflicting shock and awe on good people?

I hope you and your colleagues realise that the British public won’t have their intelligence insulted a second time.

Joining the dots in the Gould-Werritty affair

In the meantime, former ambassador Craig Murray has continued his research into the shady activities of Adam Werritty and Britain’s Jewish ambassador to Israel, Matthew Gould. Werrity is the special friend and self-styled “adviser” to disgraced defence secretary Liam Fox, while Gould before his posting to Tel Aviv was principal private secretary to the previous (Labour) foreign secretary David Miliband and deputy head of mission at the embassy in Iran. He also spent two years as foreign and security policy counsellor in Washington and was brought back to serve as private secretary for foreign affairs to the then prime minister, Tony Blair.

Gould was plucked almost straight from university and a sheltered life. The Jerusalem Post on 29 May last year reported he had “declared his commitment to Israel and the principles of Zionism”. What are we to make, then, of Britain’s representative to the delinquent, racist regime in the powder-keg of the Middle East?

Would Her Majesty’s Government consider appointing a fanatical Islamist as ambassador to Iran?

In his blog Murray claims Werritty/Miliband: They Were All In It to have established that Gould and Werritty held at least 8 meetings. “Only two of these eight were recorded by Gus O’Donnell in his pathetic “investigation” into the Fox Werritty affair.

“It is simply impossible that Matthew Gould, a senior British diplomat, attended all of these meetings and events, yet no formal minute or note of any of them exists.”

Murray says the media blackout on what Werritty was really up to is because “there is a silent cross-party agreement among the political establishment to ally the UK strongly with the interests of Israel… Werritty’s activities were therefore countenanced by both New Labour and Conservative leaderships.

“My sources within the civil service remain adamant that the purpose of all this activity was diplomatic preparation for an attack on Iran…I have proven that the Gould/Werritty connection was indeed far more extensive than the Establishment were prepared to admit, and directly implicated Miliband and Hague with Werritty. It was deliberately underplayed by Gus O’Donnell’s report, in a blatant act of political lying by the then Cabinet Secretary.”

Murray says he’s been tipped off that Werritty met with Robert Gates, recently retired US Defence Secretary, on two occasions, and he’d be grateful to any US-based readers who can track that down.

About the author: Stuart Littlewood

Stuart Littlewood’s articles are published widely on the web. He is author of the book Radio Free Palestine, which tells the plight of the Palestinians under occupation. For further information please visit www.radiofreepalestine.co.uk. “Lawlessness must have painful consequences for the lawless, not their victims.” (Stuart Littlewood)