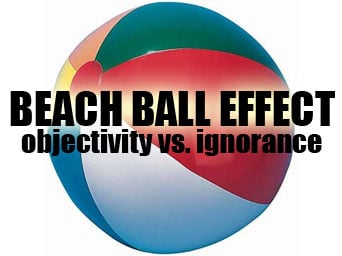 Want to Really Be Objective on the Issues?   Embrace The Beach Ball Effect

Right now America’s mainstream media is being accused of playing with fire for playing-up the prospect of war, between Iran and the West.   And clearly most people in the intelligencia know that mainstream U.S. media is clearly cheerleading for war with Iran.   It’s expected.

In fact, it’s a sensitive time with the military stand-off in the Strait of Hormuz and looming sanctions over Iran’s nuclear program. But, as Gayane Chichakyan reports on Russian TV, viewers in the States are repeatedly hearing how war is virtually inescapable.   And so those that watch non-US produced media are getting a different perspective on the issues than USA media presents.  Interesting right?  Check it out and see the other side of the Beach Ball and how it’s presented.

Now for me I find this report illuminating because it exposes something that most in the USA do not see;  in that the USA media is completely and utterly run by corporations who have a vested interest in the continued war.  They represent a clear interest and agenda that may be good for them but not necessarily good for the citizenry.

Moreover, when I sit down with my enlightened friends, they all know the truth about media. They are simply and utterly disappointed in the fallacy sold to their fellow Americans by the corporatocracy.  They expect such from a banana republic but this is very different.  This is not how it was back in the day.  It’s markedly worse and on the whole very bad for everyone on the planet.

Now when I speak to my friends who seek enlightenment through objectivity, I always tell them to look at all sides of the issues from all news sources first.  Consider the sources and where its’ coming from so that you can get a big full picture of the issues before ever making an truly objective and unbiased judgment. I call this the Beachball Effect.

To further explain, if one simply puts a beachball in front of them and attempts to explain the colors they see they will inevitable say it’s two colors never seeing that on the other side there are, in fact, two other colors on the beach ball.  Therefore, they would be right in a sense but only in that they are seeing just one side of the story.  Now if they wanted to get the big picture then they would have to get up from their chair and walk over to the other side and see the other two colors.  Once they did that, they would actually know the full beachball.   Voila!  Objectivity!  And thus, news is like that as well.

Now where to go for such objectivity seeking?

Well, in the USA, everyone knows the MSNBC, CNN, CBS, ABC, NBC, and even the GOP news channel that some call Fox News.  Okay, that’s in the USA.  But there are more outside that sphere that broadcast in English  Here’s a short list of 3 that are must see bookmarks to watch daily;

Of course, there are more sources but these 3 are musts to see if one cares to start on the path to objectivity.  I encourage you to find more…..

Now know that most of the people that follow my efforts online know that I am in pursuit of truth, justice, and humanity.   But if you’re in the camp that prefers to only watch Fox News and then tell us that everyone else in the world is crazy, then go back to your ignorance.

But don’t worry, as we evolve away from age of this horrible ignorance and into the light, we will leave a humane place for you to go and live quite happily in your fantasy world where its’ always 1955 and the world is Ozzie and Hannity and their little rude boy step child; Sir Rupert Murdoch.