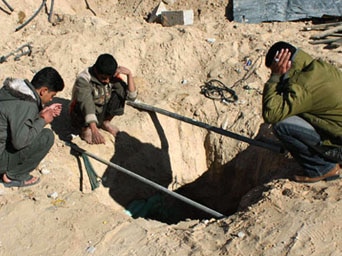 The British government gets hot under the collar at the very thought of Gaza smuggling anything in. So much so, that as Israel’s murderous assault on Gaza was coming to an end in January 2009 our then prime minister Gordon Brown promised to send naval units to stop the Hamas government “smuggling” arms which the Gazans desperately needed to defend themselves and their tiny coastal strip from their state-of-the-art weapons-freakin’ oppressors.

He announced: “We will do everything we can to prevent the arms trading at the root of the problems.” Brown was speaking as Israel carried out another 50 air-strikes on Gaza overnight. It was a particularly stupid and ignorant remark considering arms smuggling is certainly not the cause of the problem and, in any case, the Palestinians are perfectly entitled to put up armed resistance against an illegal occupier.

Now, the British government suddenly says it’s OK for Gazans to smuggle essential fuel oil for electricity generation through the tunnels they use to import black market goods and we’ve been helping Israel to destroy.

“Regarding fuel supplies in Gaza, the UK has not made any specific representations to Israel on this as we do not see Israeli restrictions on supplies of electricity or fuel as being the main cause of electricity shortages in Gaza.

“The Gaza Electricity Distribution Company is sourcing industrial diesel for the Gaza power plant through the tunnels so there is no shortage of fuel for the power plant, and in fact we understand there could be up to a month’s worth of fuel in storage.”

These words were written as part of what Lord Hylton calls “a comprehensive reply” to questions he had raised with the British Government about Gaza, the West Bank and the wider issue of Palestinian refugees, which he has posted on his House of Lords blog A reply from the British government on points I raised re Gaza, the West Bank and Palestine .

There is never any real action, just endless flim-flam.

Another gem is this: “With fishing limits and exports, we and EU partners are urging the Israelis to extend the current fishing limit from 3 to 12 miles and to allow increased exports from Gaza to the West Bank, Israel and other third countries.”

Israel has no business restricting Gaza’s fishing boats to 3 miles in the first place. Maritime law needs to be enforced.

As for the smuggling of essential fuel oil through the tunnels, there is surely someone in the Foreign Office who knows that the Geneva Conventions place a solemn obligation on occupying powers to supply utilities such as water and power to occupied populations. According to the UN Israel still occupies Gaza, So Britain needs to explain why it approves of forcing Gaza’s civilians to resort to black market methods to obtain vital fuel oil

Gaza still starved of everything important, thanks to the British government and others

Oxfam reports that the near total ban on fuel imports for public sale, imposed by Israel in October 2008, also remains in place. Fuel for home heating, running cars and private industry is only available through the black market. Now fuel oil for utilities including hospitals and basic services is ranked the same, apparently.

While on the subject of energy needs, let’s remember that Gaza has an extensive offshore gas field which Israel prevents the Palestinians from exploiting and is trying to steal.

According to Oxfam 75 percent of the population currently receives humanitarian aid. Approximately 1.1 million people are receiving food aid from humanitarian

organizations, primarily UNWRA and the World Food Programme. By doing nothing to end the illegal blockade/occupation the international community milks the West’s taxpayers year after year to provide cover for Israel’s crimes.

How clever is it for us to be subsidising those thugs and their cruel ambitions?

Only 11 percent of construction materials needed for aid agencies and PA approved projects have been allowed into Gaza, therefore people do not benefit as they should from humanitarian organizations’ reconstruction efforts. Only 28 percent of the building plan for UNRWA projects in Gaza has been approved, and these are facing serious delays. Israel’s ban on building materials has prevented the reconstruction of most of the 3,540 homes destroyed and the 2,870 damaged during Operation Cast Lead, which means that extended families are often squeezed into one house or, in some cases, one room.

Oxfam reports that 250 schools in Gaza are still out of action. 85 percent of schools that are operational have to work double shifts, which means shorter class time and an end to extra-curricular activities.

Starved of essential imports, including raw materials, and its exports blocked, Gaza has seen its economy decimated. The private sector has lost 120,000 jobs. 26 percent of the Gazan workforce, including 38 percent of youths, are unemployed

Materials for 17 water and sanitation projects are held up by the Israeli authorities. In the meantime 90-95 percent of water from Gaza’s only source, the underground aquifer, is undrinkable. Experts warn that at the current rate of depletion, the aquifer will become unusable by 2016, and the damage will be irreversible by 2020.

Gaza residents are restricted to an average of 91 litres of water per day compared to 280 litres used by Israelis. The World Health Organization says 100-150 litres a day is required meet health needs

There has been no change to the unilaterally imposed ‘buffer zone’,  a restricted-access area around Gaza’s perimeter with Israel, which extends in places up to 1,500 metres into Gaza and on the coast limits fishing to 3 nautical miles. This places 35 percent of Gaza’s farmland and 85 percent of its coastal fishing waters off limits, making a devastating hole in the economy. The lives and livelihoods of an estimated 178,000 people are directly affected, including 3,500 licensed fishermen. Israel enforces the buffer zone by sniper fire and shelling.

From January to December there were 72 reports of fishermen being shot at. The 2010 annual fishing catch was down by 45 percent compared to 2008 before the 3 mile limit was imposed – a desperate serious matter for a population whose children are undernourished.

I have just received a letter from Alistair Burt, the foreign office minister for Middle East affairs, saying the same sort of thing Lord Hylton was quoting… that ”we continue to press the Israeli Government at ministerial and official level to ease access restrictions, including to increase the fishing limits from 3 to 12 miles, blah, blah, blah…”

He also claims the Department for International Development “addresses the key access constraints” and “promotes economic growth”. Does it hell.

As the situation clearly shows, none of the British government’s diplomatic diarrhoea has made the slightest difference to Israel’s appalling conduct. Nor is it meant to, remembering how foreign secretary William Hague and Middle East minister Alistair Burt, and their boss David Cameron, have pledged undying support for that regime.

The 5th Baron Hylton (Lord Hylton) has been sitting in the House of Lords, our “upper chamber”, since 1967 and in his gentlemanly way has done much for the Palestinian cause. But he’s curiously reluctant, in spite of prodding, to name and shame the minister or Foreign Office  adviser who wrote the nonsense that appears on his blog. Could it be the same one that wrote to me?