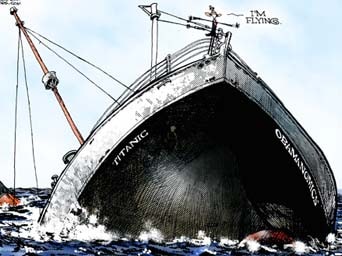 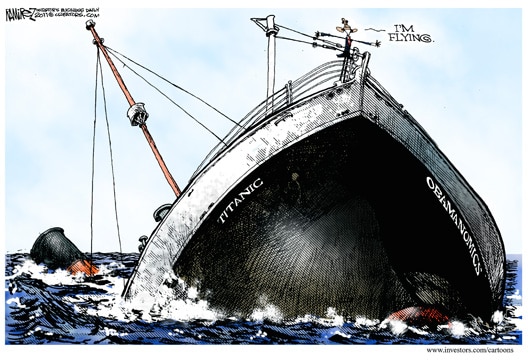 As Obama refuses to acknowledge that Obamanomics is rapidly sinking ~ a closer look at the Iran crisis reveals, if you follow the money, that the real issue is petrodollars in that Iran is dumping the dollar in its trade with Russia as it has already done with China and Japan. As such, Regime Change is now the goal of the Obama administration as it was in 2000 when Iraq’s late Saddam Hussein abandoned the petrodollar and recently when Libya’s late Muammar Gaddafi proposed a gold dinar as currency for his energy resources.

Its classic good cop / bad cop with Obama positioning himself as the good cop who is trying to restrain an impetuous Israel who wants to attack Iran. Things got a little too dicey last week, with the Mossad assassination of an Iranian nuclear scientist, so Obama cancelled the joint war games with Israel ~ particularly since Israel still refuses to agree not to launch preemptive action against Iran without U.S. approval.

But as Pepe Escobar writes ~ “ This larger-than-life psychodrama we call “Iran” may turn out to be as much about China and the U.S. dollar as it is about the politics of the Persian Gulf or Iran’s nonexistent bomb .”

To get a handle on this psychodrama , we have to follow the money and that means the implied threat to petrodollars ~ which send shivers up the spine of the global financial elite. Escobar elaborates ~ “…consider 2012 the start-up year as well for a possibly massive defection from the dollar as the global currency of choice. As perception is indeed reality, imagine the real world ~ mostly the global South ~ doing the necessary math and, little by little, beginning to do business in their own currencies and investing ever less of any surplus in U.S. Treasury bonds.”

Excerpt: “ That Iranian isolation theme only gets weaker when one learns that the country is dumping the dollar in its trade with Russia for rials and rubles — a similar move to ones already made in its trade with China and Japan.  As for India, an economic powerhouse in the neighborhood, its leaders also refuse to stop buying Iranian oil, a trade that, in the long run, is similarly unlikely to be conducted in dollars….Translation, if any was needed: in the near future, with the Europeans out of the mix, virtually none of Iran’s oil will be traded in dollars. In this context, it’s worth remembering that in September 2000 Saddam Hussein abandoned the petrodollar as the currency of payment for Iraq’s oil, and moved to the euro. In March 2003, Iraq was invaded and the inevitable regime change occurred. Libya’s Muammar Gaddafi proposed a gold dinar both as Africa’s common currency and as the currency of payment for his country’s energy resources. Another intervention and another regime change followed.”  See full story:

So what we are really talking about now with Iran, as it was with Iraq and Libya, is REGIME CHANGE ~ for Obamanomics, like the Titanic, will surely sink unless those precious Eurodollars are investing in the ever growing surplus of U.S. Treasury bonds.

Pepe compares it to Poe’s classic  The Pit and the Pendulum  ~ “ If this were an economic rewrite of Edgar Allen Poe’s story, “The Pit and the Pendulum,” Iran would be but one cog in an infernal machine slowly shredding the dollar as the world’s reserve currency. Still, it’s the cog that Washington is now focused on.  They have regime change on the brain.  All that’s needed is a spark to start the fire (in — one hastens to add — all sorts of directions that are bound to catch Washington off guard).”

As Petrodollar expert William Clark writes regarding Petrodollar Warfare ~ “the upcoming Iran bourse will introduce petrodollar versus petroeuro currency hedging, and fundamentally new dynamics to the biggest market in the world – global oil and gas trades. In essence, the U.S. will no longer be able to effortlessly expand its debt-financing via issuance of U.S. Treasury bills, and the dollar’s international demand/liquidity value will fall.”   See story

To make it simple, Obama is captain of a sinking ship, overloaded with ever increasing debt, but he still stands on the bow convinced he is flying when in reality he is just one spark, or a few minutes, or days away from a complete economic disaster.