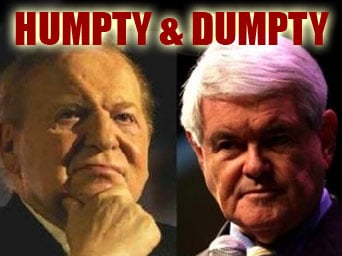 Gingrich’s faltering presidential campaign was completely resuscitated by a 5 million donation from Las Vegas casino king and super-Zionist  Sheldon Adelson.  (According to Wikipedia, Adelson is currently the 8th wealthiest American and 16th wealthiest person in the world, with a net worth of $23.3 billion.) Rising from the ashes, Gingrich now has won the South Carolina primary and has a  decent  chance of becoming the Republican presidential nominee.

Adelson has been the major backer of Gingrich for some time. A Washington Post  article on  the Adelson-Gingrich connection (though kept out of the first section of the paper) states:  “Perhaps no other major presidential candidate in recent times has had his fortunes based so squarely on the contributions of a single donor, as Gingrich has on Adelson, who has spent millions in support of Gingrich and his causes over the past five years.”

As the Washington Post article points out, Adelson and his Israeli-born wife, Miriam, have spent time and money lobbying  for a bill to move the U.S. Embassy in Israel from Tel Aviv to Jerusalem. Gingrich has promised that his first executive order as president would be the embassy move.

Adelson is an ardent Zionist. Since 2007 the Adelson Family Foundation has made contributions totaling $100 million to Birthright Israel, which finances Jewish youth trips to Israel, Adelson is such a hard-line Zionist that he even stopped supporting  AIPAC when it appeared to support a 2007 peace initiative championed by Olmert, President Bush, and Secretary of State Condoleezza Rice.

In 2009, the Zionist Organization of America (ZOA), which is a hard-line Zionist group that wants Israel to retain the occupied territories and expand the Jewish settlements,  presented  Adelson its most distinguished and historic award, the Theodor Herzl Gold Medallion for outstanding achievement in Zionism.  His wife received the Louis D. Brandeis Award. The couple now have  their names on one of ZOA’s major awards, the Dr. Miriam & Sheldon Adelson Defender of Israel Award.

Adelson is intimately involved in Israeli politics. Since 2007, Adelson has owned a daily newspaper in Israel  called Israel Hayom, which distributed free of charge, has the largest circulation of any newspaper in the country.  The newspaper is  ultra-supportive of Prime Minister Benjamin Netanyahu,  to whom Adelson is a close ideological ally and personal friend.  The newspaper also has been doing much to promote Gingrich.

It should be recalled  that Gingrich was so extreme as to recently say that the Palestinians are an “invented people.”  Shortly thereafter, Adelson said that Gingrich had been completely correct. In an address at a Hanukkah celebration in Israel for hundreds of youths visiting that country as part of the Taglit Birthright (Birthright Israel) program (which Adelson funds), Adelson stated: “Read the history of those who call themselves Palestinians, and you will hear why [Newt] Gingrich said recently that the Palestinians are an invented people. There are a number of Palestinians who will recognize the truth of this statement.”  He appealed to  the Jewish youths to “speak in support of Israel” when they returned to their countries.

When  on the NBC show Rock Center,   Ted Koppel asked Gingrich about the reason for Adelson’s support, Gingrich was quite frank: “He knows I’m very pro Israel. That’s the central value of his life. I mean, he’s very worried that Israel is going to not survive.”

If  Israel is the “central value” of Adelson’s life (which certainly appears to be true), he is one Jewish American who cannot be accused of having a “dual loyalty.”  His loyalty is truly singular!

Like most American conservatives, Gingrich purports  to identify with the wisdom of the Founding Fathers, but catering to a person with a view such as Adelson’s puts Gingrich in a position completely  opposite to that of George Washington, who, in his Farewell Address of 1796, warned Americans of the grave danger of those who had a  “passionate attachment” to a foreign country.

While the mainstream media has focused on the negative effects  of big money super pacs, and shows no particular fondness for Gingrich, it makes little reference to his major patron’s identification with Israel. In fact, Rachel Maddow and Michael Isikoff even managed to offer a critical presentation of Adelson’s financing of Gingrich without any reference to Israel.

Even the  Washington Post’s article on Adelson was not in the major, news section of the paper. And there was no follow up on the NBC program  to Gringrich’s response about his major patron’s fundamental concern being Israel—“the central value of his life.”  The fact of the matter is that the impact of the Israel lobby on American politics is a taboo issue in the United States mainstream.

When  the Republicans presidential candidates (Ron Paul being the exception)  have talked about foreign policy, it often seems that they are running for the top spot in the Israeli Likud Party, rather than President of the United States of America.   Consequently, it is difficult for any candidate to outdo his competitors.  However, Sheldon Adelson’s financial backing of Gingrich would seem to indicate that he is the best candidate from the standpoint of the Israeli Right. And Gingrich might go a little farther than his competitors since he even suggests clemency for Israeli spy Jonathan Pollard.

Adelson’s money enabled Gingrich to win South Carolina, and Adelson could put much more into Gingrich’s campaign.  With such  financial support, Gingrich might be able to gain the Republican presidential nomination, but it would seem that he has too much baggage to actually defeat Obama, at least this is the conventional wisdom–though stranger things have happened. Nonetheless, having  pro-Israel Republican candidates led by Gingrich  pushes Obama in a more pro-Israel direction, which entails a harder US line toward Iran.  No matter what happens in the US presidential election, therefore, US Middle East policy will be improved from the Likudnik perspective. And this is Sheldon Adelson’s objective.

“This video exposes Israel’s increasing role in American politics, which has led to the Iraq war, September 11, 2001, and a great deal of other tragedies that have befallen the United States.

Israel’s lobby in America, AIPAC, is the only foreign agent in America that does not have to register under the Foreign Agent Registration Act. Almost every major American politician in the last decade has either met with AIPAC or flown to Israel to receive approval before running a campaign. Many of America’s congressman have admitted that they constantly ask how Israel feels about a bill before voting on it.

And, on a side note, this video exposes how American zionists like Sheldon Adelson pay politicians such as Newt Gingrich to attack Ron Paul because he doesn’t support Israel. Now we know why Gingrich called Paul’s foreign policy “dangerous.”

Goldman Sachs was the largest contributor to President Obama’s 2008 Presidential campaign and it has been widely estimated that American supporters of Israel contribute between 35-75% of all political contributions in American elections.”