Home Government Wake Up, America! The GOP Intends to Abolish the Middle Class 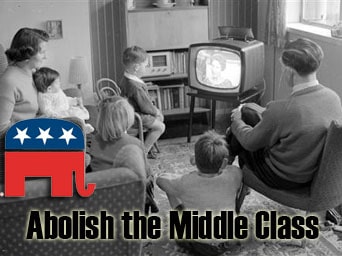 Wake Up, America! The GOP Intends to Abolish the Middle Class If there’s anyone left in America who, at this point, can’t see that the Republican Party is the enemy of the American middle class, they have to be either feeble minded, or harboring a hidden interest which precludes them from wanting to see. All one has to do to get a clear view of this political reality is to open one’s eyes and look at who the GOP is putting forward to assume the highest office in the land.

One is Mitt Romney, a vulture capitalist who became a charter member of the top one percent club by purchasing perfectly sound companies, firing their employees, and then selling the companies off, one piece at a time, for profit. The other is Newt Gingrich, a former Speaker of the House of Representatives who was so self-serving and corrupt that in 1998 he was forced to resign from congress by his own Republican colleagues.

These two gentlemen, and the self-serving activities of others of their ilk, are the two bookends that led directly to the 2008 collapse of the American economy, causing millions of Americans to lose their jobs, their homes, and their life savings. Mitt Romney represents the selfish capitalists who threw America under the bus for their own personal greed, and Newt Gingrich personifies the corrupt former politician who uses his influence in congress to lobby his former colleagues to water down the law, allowing the Romney’s of the world to ply their trade.

Now, these two “gentlemen” are asking America to trust them to repair an economic environment that they both helped to create, and they both have a vested interest in maintaining. And how do they intend to repair the economy? Essentially, Romney says that we should allow those who are in foreclosure to lose their homes, then start anew with a fresh group of suckers. Specifically, he said in an filmed interview with the Las Vegas Review-Journal, “Don’t try to stop the foreclosure process. Let it run its course and hit the bottom.” He then went on to say, “Allow investors to buy homes, put renters in them, fix the homes up and let it turn around and come back up.”

Mr. Romney’s remarks make it abundantly clear that his only concern is with what’s in the best interest of the investor class. He has absolutely no concern for the devastation and turmoil that losing a home would visit upon the lives of a family that’s been turned out into the street – and we’re not just talking about an unfortunate few here. Mitt Romney is talking about casually writing off millions of Americans as collateral damage.

Newt Gingrich is of an identical mindset. Gingrich promises “extraordinarily radical proposals to fundamentally change the culture of poverty in America.” And what are those proposals? During this time of record high unemployment, one proposal that Newt is floating is to fire the father from his union protected job and putting his children to work. He said, “It is tragic what we do in the poorest neighborhoods, entrapping children in, first of all, in child laws, which are truly stupid.” Gingrich went on to say, “Most of these schools ought to get rid of the unionized janitors, have one master janitor and pay local students to take care of the school. The kids would actually do work, they would have cash, they’d have pride in the schools, they’d begin the process of rising.” Yes, Newt, but what would happen to their families?

Again, this Republican frontrunner for president is completely oblivious to the dire straits of the average American family. His solution would make the situation worse. He’s not the least bit concerned with stabilizing the plight of poor and middle-class families. He’s only concerned with destroying organized labor by firing the father and replacing him with the cheaper, and un-unionized, labor of his children. And the irony is,this GOP fixation on returning poor and middle class American families to Great Depression status has become such of a fundamental part of the GOP mindset that average Republicans, who would be devastated by such a policy, are applauding! They’ve been conditioned to hate this nation’s first Black president so passionately that they’ve bought into self-sacrifice: “Obama is un-American – he’s engaged in a socialist plot to save my family.” It is truly unbelievable how easily the human mind can be controlled.

What these average Republicans don’t understand is that they’re being manipulated. The corporate conservatives who run the Republican Party don’t care any more about them than they do black people, gays, undocumented workers, or anyone else. The corporatists are simply manipulating their anger, prejudices, and uninformed minds in order to keep the poor and middle class divided. That way, we’re so busy fighting one another that we fail to recognize that they’re cutting all of our throats.

I suggest that Black people take a look at this as well. The corporatists are depending on angry and reactionary White people inflaming a knee-jerk reaction of anger and hostility among Blacks, which serves the very same purpose, keeping the poor and middle classes divided. That’s why they keep race on the front burner, using inflammatory buzz words and phrases like “the food stamp president,”etc. Corporatists desperately need to keep the race war raging. That way the poor and middle class of both races fail to recognize that we’re currently knee-deep in a class war, and our side is losing badly.

So again, it’s time for America to wake up – and particularly poor and middle class Republicans. Because entrusting this nation and our economy to the GOP would be like entrusting our children to convicted child molesters:

THE GOP: A ONE HUNDRED YEAR RECORD OF SWINDLING THE AMERICAN PEOPLE