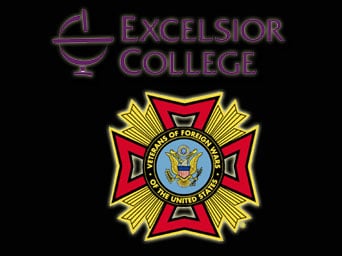 (January 26, 2012) – Sacramento, CA – The Veterans of Foreign Wars, Department of California has signed an educationpartnershipagreement with Excelsior College®, a regionally accredited nonprofit distance learning institution based in Albany, New York.

The California initiative reflects a national VFW goal: to attract younger veterans of the Iraq and Afghanistan wars who are returning home and considering their higher education options. Under the new agreement California VFW members, their spouses and domestic partners are eligible for reducedtuitionandfees for degree programs in Excelsior’s schools of Liberal Arts, Health Sciences, Business and Technology and Nursing.

In addition to extensive online programming, Excelsior is also home to Excelsior College® Examinations, an extensive credit-by-examination program that provides an additional option for degree completion.

Among the estimated 2 million veterans living in California, approximately 95,000 are members of the California VFW and its 360 posts around the state. An estimated 30,000 veterans are between the ages of 25 and 55, similar to the age of Excelsior’s adult students who are pursuing degree completion.

“We need to welcome our younger members, and this is another way of providing a truly valuable membership benefit,” said James R. Rowoldt, state adjutant/quartermaster of the VFW, Department of California.

“Excelsior College is pleased and excited about its new relationship with the California VFW,” said Excelsior President John F. Ebersole. “As a long-time former resident of California while on active duty and later, I have observed the positive role that veterans play in the life of the state. We are honored to partner with the California VFW to assist these men and women in continuing their education.”

Similar partnerships are in place between Excelsior and VFW departments in New York, Nevada and Vermont. In New York, thepartnershiphasalreadybeguntopayoff for VFW members.

Excelsior College, established in 1971, has a long and successful history of providing education to veterans and service members. The College has an extensive range of support services tailored to veterans, including financial counseling on veteran benefits and other financial aid and academic advisors who are veterans themselves. The College offers a range of academic support programs and career counseling services tailored to veterans.

The College accepts prior military training in the form of academic transfer credit based on recommendations from the American Council on Education’s Military Evaluations Program. Each year, Excelsior accepts approximately 50,000 military training program credits per year toward completion of undergraduate degree programs.

In November 2011, the College was named by Military Times Edge magazine as a top school for veterans, and has been repeatedly named a top “military friendly” school by GIJobs magazine.

For information on joining the VFW in California, visit www.vfwca.org/membertools/membershipinformation.html .

For information about the California VFW education partnership with Excelsior College, email veterans@excelsior.edu or call 888-647-2388 ext. 1352.

About the VFW, Department of California

The Veterans of Foreign Wars of the U.S. is a nonprofit veterans’ service organization composed of combat veterans and those who currently serve on active duty or in the Guard and Reserves. Founded in 1899 and chartered by Congress in 1936, the VFW is the nation’s largest organization of war veterans and is one of its oldest veterans’ organizations. With 2.1 million members located in 7,700 VFW Posts worldwide, the VFW and its Auxiliaries are dedicated to “honor the dead by helping the living” through veterans service, legislative initiatives, youth scholarships, Buddy Poppy and national military service programs. Annually, the VFW and its Auxiliaries contribute more than 11 million hours of community service to the nation. For more information or to join, visit the organization’s Web site at www.vfwca.org.

Excelsior College http://www.excelsior.edu is an accredited, nonprofit distance learning institution that focuses on removing obstacles to the educational goals of adult learners. Founded in 1971 and located in Albany, NY, Excelsior is a proven leader in the assessment and validation of student knowledge. It offers more efficient and affordable access to degree completion through multiple avenues: its own online courses and college-level proficiency examinations, and the acceptance in transfer of credit from other colleges and universities as well as recognized corporate and military training programs. Excelsior College is accredited by the Middle States Commission on Higher Education.