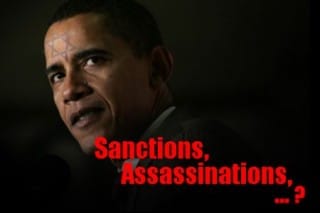 Washington’s double-edged sword of policies towards the Islamic Republic is not only exhausting the patience of the Iranian nation but it is provoking the ire of international conscience as well.

Goaded by Washington, EU foreign ministers decided on January 23 to impose a ban on oil imports from Iran under the fickle excuse that the country is pursuing a clandestine nuclear weapons program.

In a recent stance, Iran has threatened that it would never let a situation prevail where regional states could sell their oil while Iran couldn’t. Ali Akbar Velayati, senior adviser to the Leader of the Islamic Revolution Ayatollah Seyyed Ali Khamenei, has said, “When there is an absence of Iranian supply, oil prices will soar up dramatically and the western countries are well aware of this fact; However, Iran will never allow itself to land in a situation in which it cannot sell oil but other regional states can.”

It hardly needs saying that such a firm stance on the part of Iran has been given considerable thought and that the European Union should be prepared to face the consequences of their irrationality and blind servitude to Washington.

Earlier Iran had warned that it would close the Strait of Hormuz, a move which, as the IMF has said, “could trigger a much larger price spike including by limiting offsetting supplies from other producers in the region.”

The sanctions on Iran oil, which will be effective in July, will surely have drastic repercussions for the European Union as Iran is mulling banning the sale of oil to Europe, a proactive move which will salvage the country’s economy on the one hand and will also lead to a drastic hike in oil prices on the other.

Undoubtedly, the EU decision to impose sanctions on Iran’s oil exports is, as Velayati has said, “a political maneuver,” and that “Iran doesn’t need any favor from any country to sell its oil, because global demand is always there.”

In the long run, Western oil firms and consumers may “emerge the biggest losers.” The IMF has predicted that crude oil prices could rise up to 30 percent namely to over USD 140 per barrel if Iran ever decided to retaliate by halting its oil exports altogether. Saudi Arabia has vowed to fill the gap.

But what if Saudi Arabia is bluffing? What if she cannot make up for the supply deficiency?

At all events, oil is fungible and Iran will easily find its own customers in Asian markets.

Europe has seen better days and now is not surely the best time for the imposition of sanctions on Iran’s oil as they will suffer most. For some European countries such as Italy, Spain and Greece, it will not be really easy to participate in the ban on Iran oil as they largely rely on Iran imports. As for Greece which is receiving oil from Iran on credit, it will be an utterly wrong decision to join other European countries which have secret plans to disintegrate the country.

Much to the chagrin of Washington and the Zionist regime, a number of countries such as China, India, Russia, Turkey, Japan, and South Korea have already refused to abide by the new measures. Russia has slammed the new package of sanctions and in a tough-worded statement, the Russian Foreign Ministry described the EU move as “deeply erroneous.”

“Under such kind of pressure Iran will make no concessions and no correction of its policy,” it said. Foreign Minister Sergei Lavrov told reporters that there was nothing to prove that Iran was trying to build an atomic weapon.

Russia has also warned the West against a US-led invasion of Iran, saying that this would incur a chain reaction and that the catastrophic consequences will affect the entire region.

It is manifest that Iran will do without the EU and will find its customers elsewhere in Asian markets. In other words, Iran will not lose in the passive war of sanctions engineered by Washington.

Indeed, sanctions are to be seen as part of Washington’s policy of coercion to break the back of the Iranian government and bring the nation to its knees. However, it should be noted that Iran has been mercilessly under severe sanctions for over 30 years and that it has turned the sanctions into opportunities to attain self-sufficiency and stand on its feet again. The entire gamut of the sanctions designed and spurred by the US and now followed by the EU is also tailored to suit the interests of Israel, the archenemy of Iran and thus the bosom buddy of Washington.

Ever since its inception, the Islamic Republic has been the target of Washington’s inveterate animosity.

In his book Spider’s Web: The Secret History of How the White House Illegally Armed Iraq (1993), Alan Friedman reveals how the US government aided the regime of the executed dictator Saddam Hussein in his invasion of Iran. Ironically, the once good pal of the United States suddenly turned into a parasite to be eliminated from the face of the earth. According to Friedman, Washington generously doled out its assistance in various forms to Iraq including billions of dollars worth of economic aid, the sale of dual-use technology, non-US arms, military intelligence, Special Operations training, and active participation in war against Iran. An Atlanta branch of Italy’s largest bank, Banca Nazionale del Lavoro funneled over USD 5 billion to Iraq from 1985 to 1989. This piece of information had been concealed by the CIA.

An appalling report revealed that the US government provided Saddam’s regime with chemical weapons. Released on May 25, 1994 by the US Senate Banking Committee, the report detailed the export of pathogenic (‘disease producing’), toxigenic (‘poisonous’), and other biological materials to Iraq after licensing by the US Department of Commerce. The report revealed 70 shipments (including Bacillus anthracis) from the US to Iraq over a span of three years.

The Iraqi regime used the chemical weapons provided by the US against the Iranian combatants and civilians, thus leaving them in a life-in-death situation. Around 100,000 Iranians were affected by nerve and mustard gases, and around one in 10 died before receiving any medical treatment. About five to six thousand are still under medical treatment, of whom around a thousand are critically ill.

The Iranian chemical victims are still dying on a daily basis.

So, Washington’s enmity towards the Islamic Republic goes far beyond its peaceful nuclear program which has constantly been used as a political leverage to stunt the economic and political growth of an anti-imperialism state and prevent the emergence of a Muslim superpower.

The depiction of Iran as a nuclear nightmare and as a global threat is only a saga manufactured by Washington in order to smother a voice so overpoweringly critical of the myriad morbid policies of a government whose American dream is dead and gone.