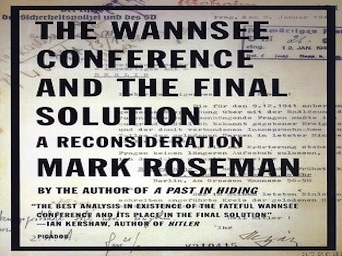 Last week, as Jewish Lobbies continue to invest enormous efforts in dictating and imposing a rigid and unquestionable Holocaust narrative, Israeli Haaretz published a short, succinct and courageous report challenging the validity of the Wannsee Conference as proof of the Nazi ‘final solution’.

Just ahead of Holocaust Memorial Day, the Israeli paper reported that Dr. Norbert Kampe (63), director of the “Wannsee Conference” Memorial Centre in Berlin, has challenged some of the most widely-accepted historical ‘facts’ associated with the conference and its meaning.

Jewish Holocaust scholars have always insisted that the master plan for the Nazi Judeocide was conceived at the Wannsee Conference but Dr. Kampe is quoted as saying that the conference dealt only with “operational matters” instead of being a platform of any form of “decision making”. To prove his point, Kampe pointed to the fact that Hitler and his ministers were not present at the conference. Furthermore, he says, “At the time, January 1942, there was no organized plan for extermination camps.”

And yet, Haaretz admits, “Make no mistake. Kampe is not anti-Semitic. Certainly not a Holocaust denier. On the contrary. As expected of a professional historian, he studied countless relevant texts, documents and testimonies on the particular event…His conclusion is the direct outcome of an educated analysis of written material in his possession.”

So courageously, a Hebrew paper praises Kampe and his “fascinating historical lesson” and also acknowledges that the Israeli Ministry of Education lacks the capacity to engage in any form of informed Holocaust debate. Haaretz clearly admits that

“to this day no one knows with complete certainty and confidence what exactly happened on 20 January 1942, in this pretty villa in the wealthy suburb of Berlin.”

Only one copy of the Wansee Conference protocol, found in 1947, survived the war, others having been deliberately destroyed by the Nazis in an effort to conceal evidence. This protocol is the only authentic documentation as to what happened in Wannsee and one of the few that made explicit use of the term “final solution”. However, Haaretz concedes that, like any historical document, the Wannsee document should be read carefully. The words “death” or “murder” do not appear in the conference protocol. Instead, it refers to “natural diminution”, “appropriate treatment”, “other solution options” and “different forms of solutions.” In fact, the only explicit references in the document deal with deportation rather than extermination. Even the famous table attached to the protocol that counts the Jews in each occupied country, does not state that those Jews are destined to be destroyed.

Just a few days ahead of Holocaust Memorial Day, a Hebrew paper found the courage to admit that “decades of Holocaust research could not find a clear and explicit command made by high-level Nazi officials to engage in systematic mass extermination of Jews.”

According to the Israeli paper, the Nazis disguised their true intentions in some “ambiguous orders and “secret codes”, which were supposed to lead officers to interpret and to react upon what they believed to be Hitler’s will.

The moral here is simple. Once again we learn that some Israelis are far ahead of the Western press and academia in their criticism of Jewish ideology in general and the Zionist Holocaust narrative in particular.

“Cross-browser testing has been one of the biggest challenges for Web designers because it is such an arduous and time-intensive task,” said Lea Hickman, director, Creative Solutions Business Unit at Adobe. “Now with Adobe BrowserLab, designers have a simple solution that enables comprehensive browser compatibility testing in just a matter of minutes, leaving Web designers with more time to be creative and deliver the high-impact sites customers are demanding.” “We hear from many design shops who simply don’t have the resources to be able to support all the browsers and it’s very difficult for them to be able to standardize designs which can be damaging to a brand,” said Melissa Webster, vice president and program lead for IDC’s Content and Digital Media Technologies Research Team. “Adobe BrowserLab is a simple solution that can empower the designer and be a big cost savings to the client.” Key Features of Adobe BrowserLab include support for all modern browsers and operating systems so that Web designers can see how their Web pages will appear across multiple browsers and on a variety of platforms. The initial set of browsers that are supported include Windows® Internet Explorer® 6.x and 7.x; Firefox® 2.x and 3.x; and Safari® 3.x. This capability is enabled by virtualization technology, hosted through a cloud-based application, which eliminates the need to have browsers installed on a system before testing a site. Adobe BrowserLab lets designers compare and contrast browsers via an interface that works on any Adobe Flash Player 10® enabled operating system, making it compatible with Mac and Windows.

In addition, Adobe BrowserLab includes multiple viewing and diagnostic tools to help Web designers easily spot potential issues. For example, designers can view two screenshots from different browsers side-by-side, or they can use the “onion skin mode” to overlay screenshots on top of one another with variable opacity. There is also a zoom function to help zero-in on bugs. Testing preferences can be customized and saved with Browser Sets, for designers who work with specific platforms. go to web site test flash player