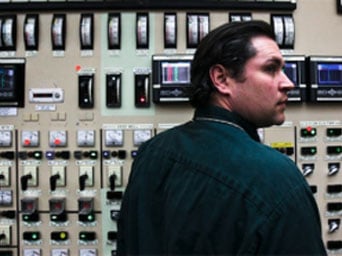 (San Francisco) Excelon Corporation announced Monday, Jan 30 that one of two reactors at Byron, Illinois had automatically shut down due to loss of electrical power from the electrical grid.

This is perfectly in line with the normal abysmal efficiency of the big nuke power reactors of at most 33%. Equivalent Billion Watt  coal and/or natural gas power plants hit 60% efficiency.

Light radioactive gases are being released in steam from the turbine building.

Excelon says this includes radioactive Hydrogen. Excelon’s description would be funny if it was not an outright lie and murderous in its application.

“The steam contains tritium, a hydrogen isotope with low levels of radioactivity. Exelon, in a news release, said tritium occurs naturally and is found in virtually all surface water, although it is found in greater concentrations near nuclear reactors.” …Excelon Corporation

Tritium is vanishingly rare in nature. Tritium is manufactured by atomic bombs and nuclear reactors. Tritium is then used by the nuclear weapons labs in hydrogen bombs to boost the bomb’s destructive output a thousand times.

The simple fact of the matter is that radioactive hydrogen combines readily with water and all of us humans are 70% water.

What’s more, 80% of the molecular bonds in human bodies are hydrogen bonds. The radioactive hydrogen goes right through our clothes and skin to wreak havoc on a molecular scale.

Because of this, I’d stay clear of the Byron, Illinois area for the immediate future. For VeteransToday readers, there is no good reason to go there.

All American nuclear reactors must be fed electricity from the electric grid from two separate directions. The outside electricity is used to power the all important water pumps. Without tons of moving water utter destruction is but hours away. It is a very interesting question, then from a military standpoint, of how both electrical feeds at the Byron Station were discontinued at the same time.

Your comments are welcome.