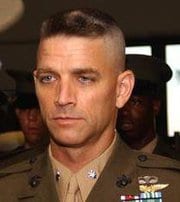 USMC, is fighting to prove that her husband did not commit suicide but was instead murdered. However, the Marine Corps refuses to help.

As part of this fight she partnered with Tracy Shue, widow of Colonel Philip Shue USAF and writer/military family advocate Cilla McCain and drafted a Bill of Rights for Bereaved Military Families.

To bring this campaign to the public, they have started a petition to Congress and launched MilitaryHomicide.org as a resource for other military families facing the same circumstances.

Marine Corps Colonel Michael Stahlman was an investigating officer in the case against Lt. Andrew Grayson, an intelligence officer charged with making false statements, attempting fraudulent discharge, and obstructing justice, in connection to the deaths of 24 Iraqi civilians in the city of Haditha.

Colonel Stahlman was vocal in his disappointment with the manner in which the entire Haditha matter was handled by the Marine Corps hierarchy and recommended that charges against Grayson be dropped. The recommendation was rejected by prosecutors and Grayson eventually was cleared of all charges in June 2008.

At the time of Grayson’s acquittal, Colonel Stahlman was serving as the Rule of Law Coordinator at Camp Ramadi Iraq, where he was found unconscious with a gunshot wound to the left side of his head on July 31, 2008. Never regaining consciousness, he died months later on October 5, 2008 at Bethesda Naval Hospital.

His shooting was immediately suspicious to his widow Kimberly. Despite the fact that Colonel Stahlman was right-handed and had no history of depression, the Naval Criminal Investigative Services and the Armed Forces Institute of Pathology apparently labeled his shooting a suicide within hours of the incident without performing all available evidence testing.

Mrs. Stahlman hired experienced forensic reconstruction consultants to dissect all of the evidence collected after the shooting. The result was the conclusion that Colonel Stahlman did not shoot himself, but was instead the victim of homicide.Mrs. Stahlman presented the scientific evidence to NCIS, AFIP and South Carolina Senator Lindsey Graham, but she was shocked when they refused to thoroughly address the detailed and compelling forensics analysis or investigate further.

In addition to the petition efforts, Mrs. Stahlman separately is working with attorneys Victor A. Kubli and Alan M. Grayson to pursue legal action to, among other things, correct the manner of death finding for Colonel Stahlman and defend his remarkable legacy of years of exemplary military service. She also is telling the story of her struggle in a forthcoming book co-authored with McCain. Release date is not yet available.

For further information, please visit www.militaryhomicide.org or, for the status of efforts to correct the manner of death finding for Colonel Stahlman, contact attorney Victor A. Kubli at (301) 801-2330.