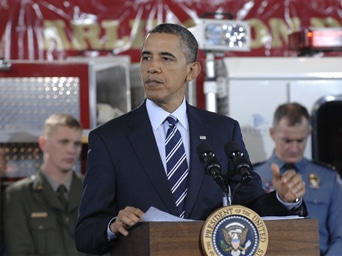 ARLINGTON, Va., Feb. 3, 2012 – President Barack Obama today continued his commitment to improving employment among veterans by introducing an initiative to hire them as the country’s first responders.

“In my State of the Union address, I proposed a new initiative called the Veterans Jobs Corps to put veterans back to work protecting and rebuilding America,” he said. “And today, we’re laying out the details of this proposal.”

Speaking at a fire station here to veterans, firefighters, police officers and national park employees, Obama shared the venue’s significance before his remarks.

“This is a fire station that holds some special significance for our country,” he explained. “On September 11th, the firefighters of this house were among the first to respond to the attack on the Pentagon.

“You guys answered this nation’s call during its hour of need,” Obama added. “And in the years that followed, as Americans went to war, some of you answered that call, as well.”

The president encouraged the hiring of veterans to replenish the ranks of the nation’s first responders.

“First, we want to help communities hire more veterans as cops and firefighters,” he said. “Over the past few years, tight budgets have forced a lot of states, a lot of local communities, to lay off a lot of first responders.”

The country already has made progress in veterans’ employment, Obama said.

“Already, we’ve helped 600,000 veterans and their family members go back to school on the Post-9/11 G.I. Bill,” he said. “We’ve hired over 120,000 veterans to serve in the federal government [and] we’ve made it easier for veterans to access all sorts of employment services.”

When he first became president, Obama said, one of his first actions was to ensure state and local governments received assistance through the Recovery Act to avoid laying off first responders.

“Thousands of firefighter jobs were saved because of the actions we took,” he noted. “But budgets are still tight, and that’s a problem we need to fix. Jobs that protect our families and our communities shouldn’t be the first on the chopping block. They should be one of our highest priorities as a nation.”

Obama emphasized he wants to restore local communities and national parks, noting Interior Secretary Ken Salazar’s presence. The Department of the Interior manages and sustains the country’s lands, water, wildlife, and energy resources, among its other responsibilities.

“He needs some help,” Obama said of Salazar. “And our veterans are highly qualified to help him. They’ve already risked their lives defending America. They should have the opportunity to rebuild America. We’ve got roads and bridges in and around our national parks in need of repair. Let’s fix them.”

Veterans Affairs Secretary Eric K. Shinseki said in a conference call with reporters yesterday that the new three-part Veterans Job Corps initiative “will ensure our veterans don’t have to fight for jobs once they come home.”

Shinseki called on employers to “enlist veterans in the work of rebuilding our nation.”

The nation owes those who volunteered to serve in uniform after 9/11 “a debt of gratitude,” Shinseki said, “and we must ensure that veterans who come home from Afghanistan and Iraq get the opportunities they deserve.”

Obama lauded veterans for their resolve and “unparalleled skills and experience.”

“They’ve saved lives in some of the toughest conditions imaginable,” he said. “They’ve managed convoys and moved tons of equipment over dangerous terrain. They’ve tracked millions of dollars of military assets.

“They’ve handled pieces of equipment that are worth tens of millions of dollars,” he added. “They do incredible work. Nobody is more skilled, more precise, more diligent, more disciplined.”

Obama noted these are “challenging” times for America, but “we’ve faced challenging times before.”
“On the grounds here you’ve got a stone from the Pentagon and a beam from the World Trade Center,” he said. “And that reminds us of our resolve as a people.

“They remind us that when we come together as one people and as one community, one nation, then we prevail,” Obama continued. “That’s who we are.”

America exists because of values and teamwork — generations of Americans working together to build it, the president said.

“This is a nation where, out of many, we come together as one,” Obama said. “Those are the values that every veteran understands.”