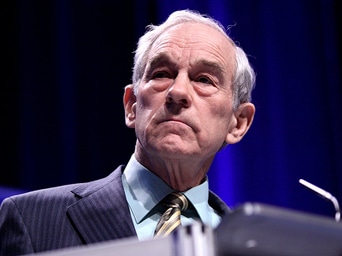 Even an Oxymoron can understand this video montage that carries Ron Paul’s “Liberty” thread during the past two decades?

Ask where was the media? And you will see proof that the media, as well as our elected representatives are all “in on it.” In on what? In on the rape and pillage of the American dream is what!

Cong. Paul points it out so publicly in this video montage. Show it around and talk about it, even to brain dead friends, and we all have plenty of those.

I need not write a lot here, because the video says it all. Hell’s bells even Chris Matthews can understand this. There is no American dream; never really was—counterfeit money; fat cat speculators using it for war and bombs; accompanied by unpatriotic acts by Congress.

Also replacing information with propaganda for evil in the information age. Surely Americans suffer enmasse from the Stockholm syndrome. If there is a cure, it might be found in this video montage. My great hope is that this Ron Paul Truth telling will result in the destruction of the two party dialectic that has served the liars and moneychangers so well.

That may be the best result for the Ron Paul Revolution; any vote for Ron is a vote against the bastards that did this.