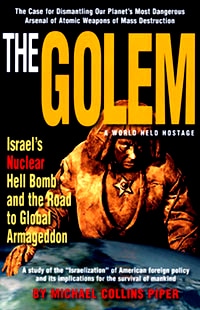 Piper is truly amazing. Those of us who know him and have worked with him know the secret of his insightful writings.

Mike has a photo memory and speed-reads with comprehension, which allows him to seriously support whatever it is he needs to document a topic.

Though I had 20 years of close association with the author at Liberty Lobby, and greatly admired his definitive book on the assassination of JFK ”Final Judgement,” I had not read this astounding work until recently.

I was amazed at his recollection of details about the Zionist lobby’s treatment of both Jimmy Carter and Bill Clinton in this book. Details that are entirely germane to the hot button issue of our day—Nuke warfare and proposed war with Iran.

The subheads on this paperback’s cover are: “ Israel’s Nuclear Hell bomb and the road to global Armaggedon; A study of the “Israelization” of American Foreign Policy and its implications for the survival of mankind.”

There is more recent history packed into this pithy straightforward writing than you will find on shelves in university libraries, and more historical data on Jewish fantasies than you ever imagined.

The concept of the Golem is actually the basis for the Super Heroes of comic strips, video games and today’s boring “action” films.

No other writer has interpreted the seminal exposure of the Talmudic chutzpah by the great Israel Shahak as lucidly as has Mike.

Not only does this book clearly outline the Talmudic fanaticism of the Israeli fundamentalists it documents every allegation made against the pervasive Jewish Lobby and it’s stranglehold on our government and media.

A list of the chapter headings should whet sharp appetites:

Mike visited Iran, and hobnobbed with Ahmadinejad among other Persian Muslims; he came away with this sage advice found on page 134 of the book:”Americans need to ignore anything and everything they hear about modern day Iran, its leader, its culture, and its people from the mass media in America.

To me the biggest problem for this book is getting brainwashed Americans and smartass pundits to read it. It’s fantasy, of course, but I daydream of teaching a class with Hannity, Limbaugh, O’Reilly and Matthews in it and having an oral exam on the contents of this book.

That is a fantasy most satisfying.