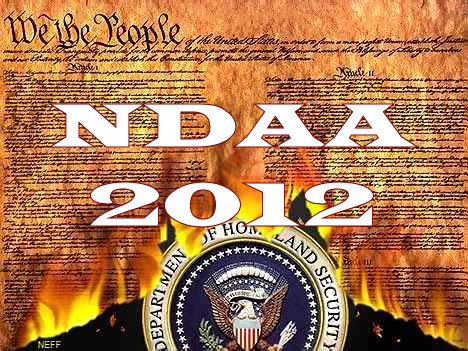 The National Defense Authorization Act of 2012 has provisions in it so illegal, so unconstitutional that any moron could see it.

Now we hear that state after state is introducing laws to “nullify” this silly law.  This should sound like good news, states loving democracy.

Bull. How do we know this for sure?

With terrorism inside this country non-existent for decades unless you count the FBI’s fiasco in Oklahoma City and the 9/11 insurance fraud as “terrorism, there is a problem with “timeliness.”

Nobody cares anymore.  Ask for a vote.  Would 99% of Americans vote to disband the TSA and allow guns on planes?

Anyone want to bet on that one, ten to one odds?

States, especially those lined up to oppose the NDAA act are run by lobbyists from health care, public utilities, organized crime (which should have been put first), the casino industry and, over the past couple of years, the Zionist lobby.

Controlling state governments in the most extreme imaginable ways, always to the detriment of workers, farmers and decent citizens, is an American tradition. Not just that, there is something much worse going on here, with the passage of the NDAA, a law that virtually puts America under martial law.

This is a law that was created to fail.  Nobody wanted it.  We already have two illegal Patriot Acts that do the same thing. We suspended habeas corpus in 2005 and everyone whining about the NDAA supported the same things they now say they hate.

It’s worse, those who still support the Patriot Acts, still support torture, those who have a long tradition of love of totalitarianism are now trying to rebrand themselves as lovers of individual liberty. Normally, this term is used to defend gun ownership.

The sad part of gun ownership in America is that when the government comes after patriots to take their guns, 95% of gun owner/activists will be siding with the police and helping kick down doors.

No, the NDAA is a fascinating and very typical piece of gamesmanship in Washington, in lobbying circles, they call it a “fundraiser.”

That is what they call a phony law that is put on the books to raise money to oppose it or to use it to unite opposition groups so they can be bamboozled into shooting themselves in the foot.

This means, of course, that bribe money is flowing everywhere and we are surrounded by cheats and liars, whodathunkit?

As a lobbyist I have seen this done continually, in fact, this is how Washington and 50 state capitols run, hoodwinking interest groups out of lobbying cash in order to kill regulatory bills or to band idiots together under some imaginary threat.

Real as the NDAA sounds, there has never been more imaginary legislation in our history, almost as though congress had legislated gravity away.

First of all, nobody wanted this law, not really.  The FBI never asked for it, the Army says they would never allow their troops to use it, the president says he was forced to sign it and found it offensive.  Then why was it written?

Let’s start with the doctrine of “nullification.”

This is how states left the union during the Civil War.  States in the South were being threatened with an end to slavery, something which the constitution, if enforced as it should have been, would never have allowed in the first place.

The Declaration of Independence, a law I tend to place well above the constitution, a prostituted document if I ever saw one, really freed the slaves in 1776. We had cheats and liars then too.

The problem we have is that a horrible law has been written…but what kind of law.  If nobody wants it, if there is no one to enforce it, why was it created?  Was it created to cause a controversy to bring back the issue of “nullification?”

Then, secondly, we look at those who are complaining about this law but who backed the same thing for years.  I don’t take any of them seriously, they were phonies, thieves and liars before and now they plan on saving us all from evil, it reminds me of something I learned when I was a Republican lobbyist.

There is a huge “pro-gun” organization.  They don’t care about guns, they are really a pack of right wing Wall Street lawyers and thieves who use an organization that is regularly lied to, propagandized and bilked out of money to support totalitarian causes.

Anyway, here is their game, one they and other lobbyist groups have been pulling for decades.  The NRA drafts anti-gun legislation.  What? Why would they do that.

The answer is easy, if there is no “enemy,” then there is no “fundraising” and no private meetings in the wonderful vacation spots of the world, no huge bonuses, no payoffs to politicians and no more laws that they really supported like the Patriot Acts or the laws that formed the monstrosity of all time, the Department of Homeland Security.

When you think “homeland,” doesn’t the word “reich” also come to mind?

The game is simple, the NRA sends a childish law, like the NDAA 2012, to a “shill,” usually a Democrat who runs unopposed.  They offer a significant bribe to get this legislation entered, legislation that is never put before committee, it would be laughed out of congress.

Then the NRA puts out a mailer and ad campaign telling how this “liberal” has created a law to take guns from decent “white people” and let “evil negroes and Mexicans” have their way with the womenfolk.

This is how New York lawyers that run organizations like this and so many others see the ignorant members who send them money, as sub-human morons who fall for the same childish trick over and over.

The worst part, of course, is that it works every time. The NDAA is one of these but the first questions are why.

Let me explain a plot.

A combination of organized crime, Wall Street and the insurance lobby (yes, more organized crime), along with the Zionist lobby, the “neocons,” the pharmaceutical crooks and industries like “fracking” and “clean coal” or “nuclear power” that plan to kill us all off with one poison or another, have bought a number of state governments.

They are always Republicans.  Wisconsin is worst with Indiana, Ohio, Michigan, Tennessee and Florida to follow.  There are more, many more.

The money that put these monsters in office is laundered drug cash, allowed into the country through the Supreme Court’s “Citizen’s United” scam, cash from the Koch Brothers, Rupert Murdoch, the Israeli propaganda mogul, Vegas casino boss Adelman and more.

To this we can add the cigarette lobby, the doctor’s union and an endless group of democracy hating busybodies who would send you to their snake handling churches at gunpoint and demand 10% of your paycheck.

Mitt Romney is one of those.

“Nullification” as it is peddled by the Tenth Amendment crowd has these goals:

I am drowning in contradictions here, all those conservative judges and lawyers, those congressmen and senators who supported the NDAA are politically aligned so closely with those now sworn to push through “nullification” to beat the NDAA.

Liars and cheats, caught them again.

If one state attorney general would file a case against the offensive provisions of the NDAA, which is what we elect them to do, and the Supreme Court overturned the illegal law as required, especially with a majority of five conservative justices, the whole thing would be over.

This is how the law was meant to work, unless, of course, it was all supposed to be a scam in the first place.

No case has been filed but laws for “nullification” have been submitted, laws that fail to limit the other federal laws they plan to overturn.

Some laws protect people, like the ones that keep your mortgage from going up to 10% or your credit cards at less than 30%, both things the Republican party has been in favor of.

Then states can pull out of “Obamacare,” the real reason for the “Trojan Horse” we call the NDAA.

Then Medicare and Medicaid.

You want to see a real police state?  Go to Wisconsin or Ohio or Indiana or Michigan.   Those are police states, up and running, financed by organized crime, the Zionist lobby and every crook in the world.

When we check the elections in state after state, though rigged voting machines have made that a bit of a joke, we find huge foreign contributions, and huge Zionist lobby contributions.

They almost invariably supporting candidates who supported torture, supported the invasion of Iraq, never mention the flood of narcotics from Afghanistan and who now are all talking about the abuses of a federal government, abuses they were totally behind for years.

Since our new friends who support “nullification” also support hundreds of political candidates whose actual practices are totally the opposite of the stated beliefs of our new friends, am I, just perhaps, becoming a bit too cynical?

Let’s do a count.  How many “Liberty Preservation” people want Iran bombed?  Where do you think their marching orders are coming from?