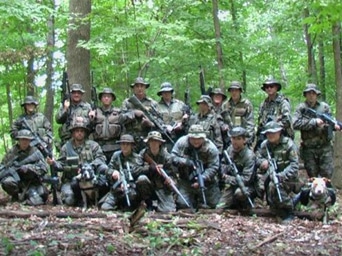 “Editor’s note:  The FBI group responsible for the Hutaree fiasco is said to be headed by the same Special Agent that was the handler of Timothy McVeigh, the  “Michigan Militia” member said to have been executed for the Oklahoma City bombings.

McVeigh was a former member of a Ranger/Special Forces Black Ops unit before joining the FBI and being allegedly executed.”

After two years of being held in Federal prison without bail or trial, 7 members of the Militia group known as The Hutaree are finally getting their day in court. The Michigan group is charged with “conspiring to rebel against the government” as well as various weapons charges for some members.

In a plot reminiscent of a bad made for TV movie, they are charged with planning to kill a police officer and then plant explosive devices at his funeral to kill more police officers. Originally nine people were arrested, but one has made a plea bargain and one is getting a separate trial.

Most likely, one of these men was actually an undercover FBI agent posing as a member of the group to create false terrorists that could be then prosecuted to justify their expenses on the “war on terror.” He was arrested with everyone else to maintain his cover then separated out quickly and released. Look at the picture and see if you can spot the FBI agent. Hint: all are wearing prison jumpsuits and have a sort of “deer-in-the-headlights” look in their eyes except one. He is wearing street clothes and looks calm, almost bored. For the correct answer go here. 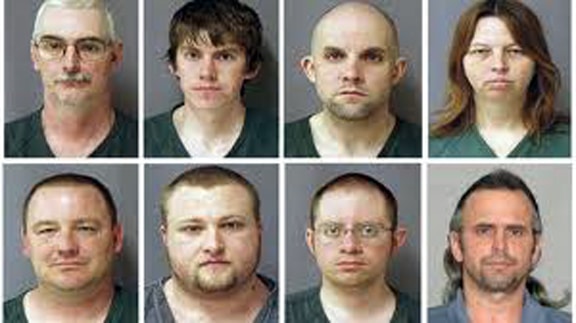 Side note: Why are so many government programs referred to as a war?   We have the war on terror, the war on drugs, the war on poverty, and many others. We then appoint a Czar which is Russian for dictator and then refer to ourselves as a “peace loving democracy.” We are really a war loving dictatorship, but most of us are now too blind or stupid to realize it.

Before I go any further, I should point out that one of the accused is the son of a longtime friend of mine so I am a bit biased. I have known the father for more than 30 years and have met and talked the son many times. He is a decorated Marine veteran of the first Gulf War, having been part of the Marines that liberated Kuwait City. He served as a weapons specialist and operated a 50 caliber machine gun mounted on a Humvee. For this job, he was given the nickname “Heavy Gunner” which is now being used in a negative manner in describing him. In fact his entire military training is now being used against him. They claim that he was the weapons specialist of the group, which he learned in the Marines. He had hoped to make a lifelong career out of the Marines, but during his deployment he saw the hypocrisy and greed that really drove the war. He saw friends and enemies killed and he still suffers from “Gulf War Syndrome” a group of mental and physical symptoms brought on by being exposed to unknown chemical agents, desert parasites, foreign diseases, experimental medications they were given, and who knows what else.

When he was honorably discharged from the Marines, he came home to Michigan where he worked at various jobs to make a living. He missed being a part of a group so he joined a local militia group. They met, drank beers, traded war stories and talked. They had shooting competitions and held outdoor activities. My friend’s son had many friends on local police departments and worked with them as a volunteer to help find a missing child.  This does not sound like someone who would plot to murder police officers.

There are many other things in this case that do not add up. The Hutaree are described as a radical religious/military cult, but my friend’s son is not very religious and would be very unlikely to be a member of such an organization. The FBI claimed that they had the group under surveillance for over two years, yet they did not know where my friend’s son lived. He had his own home, but the FBI raided his parent’s home. My friend who was 68 at the time is in poor physical health and is very frail. He looked out his front window to see a convoy of armored personal carriers coming up his driveway. They surrounded his home and agents wearing body armor and carrying automatic weapons got out and broke down his front door, despite the fact that it not locked. He and his wife walked out through his garage where automatic weapons were pointed in his face and he was forced to get on his knees with his hands on his head. Eventually they let him get up and sit on a chair.

If you could see how frail my friend looks, you would understand how ridiculous this exercise was. True, looks can be deceiving, but they were wearing body armor and he was obviously not armed. They separated he and his wife and grilled each of them. They kept asking where his son’s room was and where he slept. Both of them repeatedly told the FBI that he did not live there and that he had his own house. Eventually they believed them, but despite knowing they were in the wrong home still proceeded to rip through their personal belongings. They were not accused or suspected of being a part of the plot, but the FBI still took all of his computer equipment, cameras, GPS units, guns and other property. My friend’s hobby is computers and he sometimes repairs them for friends so they also took his friends computers as well as his daughter’s.

They then went to the correct house and did the same with the son’s belongings. It took my friend over a year of constant efforts to get his belongings back and when he did, he found much of it had been damaged. One damaged item seems very odd. He has an antique single shot .22 rifle that an FBI technician had torn apart and broken. Why he would feel the need to take apart a single shot gun is a mystery as there is no way to make a single shot gun into an illegal automatic weapon. The only thing we could think of was he had not seen one like it, he was curious, and he could do what he felt like doing. They have still not been reimbursed for having to replace their front door or the damage done to their belongings.

My friend’s son had a rather large collection of guns, all legal and properly registered, but they were all confiscated and he will probably never see them again. He does not face illegal weapons charges, though some of the others do.

Based on what I know about one member and general patterns of behavior that the FBI has exhibited in other cases, this is what I think really happened. Understand that I am just making all of this up.  I think the group sat around drinking beer and bitched about the state of the country and how they felt that the government was corrupt and had let the people down. (If that were illegal, most of us would be in trouble.)

The agent provocateur (FBI) suggested that they should do something about it. What could they do? “Kill a bunch of cops?” “Why?” “Why not?” “No, we don’t want to do that.” “Well if you were going to, how would you set it up?” (Recorder on) “Well, I would use a sniper to kill one cop who was giving someone a ticket, and when other cops came to his funeral, I would set off bombs to kill a lot of them.” “Do you have a sniper?” “Yeah, Heavy Gunner had specialized weapons training in the Marines.” You get the idea. Now they have it on tape that there is a plot to kill police officers and they have the sniper. The fact that it went no further than idle conjecture is not relevant. They have what they need. I am sure that they have multiple examples similar to what I described.

Unofficially, deals have been offered, but they involve him pleading guilty to two felonies and confessing to something he did not do. He has chosen to take it to trial. He has already spent two years in custody so even if he wins, he has already lost two years of his life. From what I can see the government’s case is quite thin and that is why it has taken so long to get to trial. When they were arrested, it was national news of the FBI thwarting a domestic terror case and they got the story that they wanted out of it. Now it is only of interest to a few local individuals so if they lose, few will notice. Still, a lot has been done to instill fear into the general population and the mere mention of terror could scare the jury into a conviction. Hopefully they will look at the real evidence and ignore the fear mongering.

Jury selection is underway right now with US District Judge Victoria Roberts guaranteeing the privacy of the jurors. In several recent controversial cases, jurors have received hate mail and death threats for doing their civic duty. Such is the state of current behavior in our country.

And for an opposing point of view.