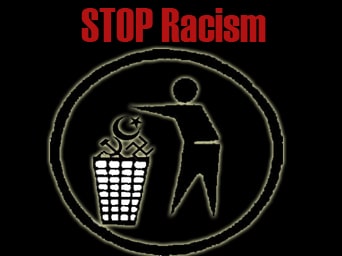 Why Do They Do What They Do?

First part of two – In this paper and the one to follow, I expose the misleading aspect that is, unfortunately, inherent to some ‘anti’ racist ideologies. I will elaborate on the role of anti racism in maintaing both Zionism and the Left discourse.

It doesn’t take a genius to see that people who are identified as Zionist and Jews are, somehow, over represented in many blunders in today’s world affairs.

The pro-war, Neocon think-tanks were overwhelmingly saturated with Zionist Jews, and the ‘moral interventionist’ advocates within the media are also largely Zionist Jews.

The ‘brains’ behind the so-called Bush doctrine i.e. The ‘War Against Terror’, were Paul Wolfowitz and Scooter Libby.

And if that were not enough, at the heart of the financial turmoil we also find Jewish persons, and financial institutions that are clearly recognizable as Jewish – such as the Lehman Brother, Goldman Sachs, Alan Greenspan, Bernie Madoff, and many others.

Why should my Jewish neighbour, also subject to the financial turmoil and with no connection whatsoever with Madoff, Wolfowitz, David Aaronovitch or Lord ‘cash point’ Levy, be at all concerned  with current financial or imperial blunders for which he has no responsibility?

Why should my Jewish musician friends who have no ties to Israel, AIPAC, CFI, CST, Nick Cohen or Alan Greenspan feel guilty for crimes or actions taken by others just because they also happen to be Jewish?

Would a Frenchman or an Irishman in America feel threatened or potentially discriminated against because of revelations that a few of their expatriates had been involved in a major colossal scandal?

So, the question I raise here is a simple one: why should any Jew feel guilty for crimes that are committed by other people – people he or she does not know and is not affiliated with?

And the answer is equally simple – Jewish individuals have no reason to assume responsibility for actions committed by other Jews.

But the truth of the matter is, that many Jews are extremely concerned about the current blunders: some feel guilty, and many – potentially at least – feel threatened. I would say that such a reaction merits our attention.

Amongst my other sins, I regularly monitor the Jewish media, and it is obvious to me that Jewish institutions are put on alert by any scandal that is even mildly associated with Jewish protagonists or institutions.

Jewish media outlets give the impression that every blunder associated with a Jew is highly likely to turn itself into a wave of vile anti-semitism. We are left to wonder then whether the Jewish fear of anti-Semitism is actually justified, or whether it is simply driven by a ‘fantasy of destruction’.

In my latest book The Wandering Who I contend that Jewish fear of anti-Semitism is largely self-inflicted and has very little to do with the surrounding reality. Jews tend to regard themselves as a tribe and most Jews are subjected to a degree of cultural and racially driven indoctrination.

On the one hand, the religion of Judaism teaches its followers that  “all of Israel are responsible for one another” (1) (Kol Yisrael areivin zeh l’zeh); while on the other hand, the non religious, secular, emancipated Jews who identify politically, ideologically and socially as Jews they also operate within Jewish ethno-centric settings.

Even within the Palestinian solidarity movement we find Jews who operate within ‘Jews only’ cells such as JBIG (Jews for Boycott Of Israeli Goods) and IJAN (International Jewish Antizionist Network).

Somehow, they also feel primarily ‘responsible for one another.’

This reading of contemporary Jewish communities may reveal why many Jews are alarmed by crimes committed by other Jews – Jews whom they don’t even know.

I can think of three reasons for such a situation:

It is increasingly clear then, that at the heart of the Jewish fear of anti-Semitism and anti-Jewish bigotry we find Jewish racial orientation, manifesting itself in various forms of projection and guilt.

Though it is clear that Jews do not actually form a race, there is little doubt that Jewishness – and especially Jewish secular discourse – is racially, or at least tribally driven.

Not many people are aware of the racial tension between different Jewish communities such as Ashkenazi and Sephardi Jews. In Israel the blood donation of Black citizens with Ethiopian background is disposed of for ‘medical reasons.

Israel legal system is saturated with discriminatory racist and supremacist laws against the Arab and non-Jewish population.

To a certain extent then, the fear of anti-Semitism inherent to the Zionist and Jewish secular political discourse is fueled by the belief that the ‘other,’ i.e. the Goy, may well be equally driven by a similar racist ideology.

Some Jews, it must be said, might offer reasons to reject the above explanation: they might argue that Jewish history (i.e. that endless chain of Shoas), proves that ‘the sons of Israel’ would be justified in being on a constant state of alert. Jews, they might say, should be constantly aware that their neighbours might turn against them at any given moment.

I suggest that we are dealing here with a ‘chicken and egg’ situation: while some Jews would agree among themselves that anti-Semitism is largely an ‘irrational disease’.

A few historians such as Bernard Lazare were brave and honest enough to ask why and how exactly, Jews have managed to bring so much pain on themselves.

A Study Of Jewish Identity Politics