Home Veterans Republican Primaries: Fooling Some of the People 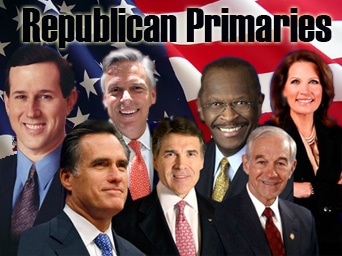 EDITOR’S NOTE:  All part of The Great Charade… a Comic Farce being played on the World Stage for an audience of Ignorant Dunces.

The entire production seems to suffer from cheap and inadequate actors!

Eric Walberg seems to know the score as well as anyone, and writes a good review.

As the primary race heats up for the Republicans, Eric Walberg looks at the “radical centre”

Salafist (excuse me, “deeply Catholic”) Republican presidential candidate Rick Santorum appears back in the race for chief elephant after trouncing Mitt Romney in Minnesota and Colorado. But beware: Minnesotans are an unpredictable lot, with the only black Muslim Congressman Keith Ellison, their own Democratic-Farmer-Labor Party, and of course 9/11 Truther and wrestler-governor Jesse Ventura (1999-2003).

But Santorum also won in Colorado (Romney won in 2008) and Missouri , riding a wave of distrust of Mitt’s conservative credentials and showing Romney’s one-percenter Achilles heel. Romney’s win in Maine last week was Pyrrhic, as there were no delegates, and he just edged out maverick Ron Paul. Romney and Santorum have each won four states, while Newt Gingrich has won only a measly South Carolina.

Santorum, a former Pennsylvania senator and favourite of evangelicals despite his papism, has hammered the former Massachusetts governor as being too moderate to satisfy conservative Republicans who distrust him on social issues such as abortion and gay rights which he has condoned in the past. Rick told CNN that the wealthy Mitt, a former venture capitalist, “had a great career in the private sector, but we’re not running for CEO of the country. We’re running for someone who can lead the country.” Romney was not the best candidate to take on Obama, who is “oppressing and taking away our freedoms, our political freedoms”.

Santorum smacks of populism, the little guy’s candidate, thumbing his nose at the rich and (horror of horror) capitalism itself. Hey, which party is this guy in? Never fear. Santorum is just making noises. He intends to gut social security, is a fan of deregulation and torture, and a hawk on Iran: “Islamic fascism rooted in Iran is behind much of the world’s conflict,” and “effective action against Iran” would require America’s fighting “for a strong Lebanon (what?), a strong Israel, and a strong Iraq”. Mind you that was in 2006 and he was opposed to actually attacking Iran, so this newspeak may indicate … nothing at all.

The bitter disillusionment of progressives in the past four years, under the absolute best the Democrats can come up with, once again confirms that there is no real difference anymore between the Republicrats. This is because left and right have been banished from the political dictionary, replaced by what has been called the “radical centre”. This oxymoron has been explored in many (mind-numbing) treatises to describe the post-Soviet era political playing field.

This latest Great Game features a unipolar empire asserting its financial and military hegemony on a newly “flattened” playing field (as coined by Thomas Friedman to evoke the joys of globalisation). The empire’s team captain is no longer a left wing or right wing, but an “extreme centre”, a term which entered the US/UK political lexicon with Ross Perot’s Reform Party in the 1990s. These extreme centrists claim to be drawing on the best of both sides in a “post-liberal, post-conservative, post-socialist world”. UK Liberal Democrat leader and Deputy Prime Minister Nick Clegg wears the label proudly: “For the left, an obsession with the state. For the right, a worship of the market. But as liberals, we place our faith in people. Our politics is the politics of the radical centre.”

So socialism is apparently not concerned with people, who are advised to put their faith in “liberals”/ radical centrists/ extreme fullbacks/ whatever. This bandying about and repackaging of ideological catchwords is the bane of our “postmodern” world, where there are no longer any truths, only interpretations. What we are left with are the Santorums on the “right” and the Obamas on the “left” fighting overdivisive social issues, such as gay marriage, abortion, anti-piracy copyright laws, and just how minimal should be state support for health and education, where no candidate (except the court jester Paul) is allowed to question the fundamentals of the system.

And what is this playing field really? Karl Polyani in the 1950s clearly saw that capitalism, by turning labour, land and money itself into commodities, was creating a soulless system which would need strong state control to prevent its inhuman nature from destroying the world. This advice was irretrievably lost over the past two decades with the fusion of left and right in the oxymoronic “extreme centre”, extreme in its implicit embrace of neoliberalism (which has very little to do with Clegg’s idol John Stuart Mills), where traditional solutions such as socialism or paternalistic conservatism are excluded.

Foreign (read: military) policy is also excluded, as the empire requires strict obedience by both its postmodern NATO halfbacks and its neocolonial goalkeepers, so that its market authoritarian team wins. The game has proved to be lethal for all concerned, with a change of strategy no longer possible via the electoral process, now the plaything of the so-called radical centre. According to Tariq Ali, democracy “is being hollowed out” in the West under neoliberalism, which is hostile to “even social democratic parties”.

Whether the Obamas and Santorums, both supporters of the spectacularly failing tactics of Team Empire, are “deeply” bad to begin with or merely corrupted by the lure of power and money is moot. They are blinkered by cheerleader Thatcher’s “TINA!” (There Is No Alternative). She meant “no alternative to capitalism”  bad enough  but to make matters worse, AIPAC et al have made sure that “and Israel” was added to the equation, making the enemy teams all those who protest the rigged game in the Middle East.

The Republican strategy to attack a Teflon Obama (besides gay/abortion charges) has been to suggest, as did Romney after New Hampshire, that Obama doesn’t believe in American greatness, and that of course Mitt et al do. That cheerleading is as close as a US politician gets to foreign policy these days. But that has been the tired Republican cheer since Ronald Reagan ran against Jimmy Carter. 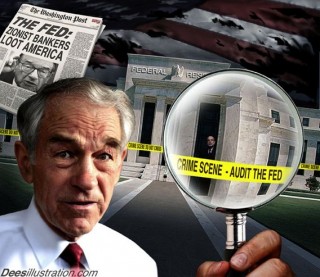 Wiley and politically very correct Obama has both begun the withdrawal from the disasters in Iraq and Afghanistan, and covered his flank by bumping off Osama Bin Laden and quite a few other “enemies”. Given the radical agreement among Republicrats on the essentials of empire strategy both at home and abroad, there is almost no scenario over the next six months where a Republican can trump this. The chauvinistic cheers fall on deaf ears.

Paul and to a lesser extent Santorum are better positioned to go for Obama’s one usable weak spot — his role as the big business/ banker darling. As Paul will never get the nomination, we can only hope that Santorum does and that Paul runs as an independent, making the 2012 presidential elections mildly interesting. But Obama is again trying to outflank Santorum, this week calling for a tax raise on the rich. Way to go, Team Empire.

The perennial Ralph Nader’s voice-in-the-Democratic-wilderness alone points to the only way out of the crisis: “If you agree that your Republican counterparts in Congress are the most craven, corporatist, fact-denying, falsifying, anti-99 per cent, militaristic Republicans in the party’s history, then why are you not landsliding them?” Well, it should be obvious by now, Ralph. 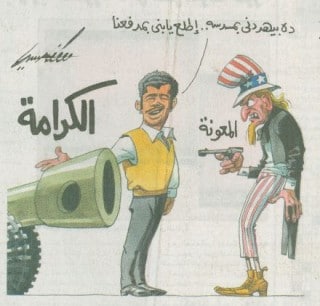 Sadly, following the US primaries, we can only conclude they have very little value for Egyptians now reconstructing their political system after a century and a half of colonialism. Hence, the startling events of the past few weeks in Cairo: even as the army, parliament and revolutionaries all attack each other as traitors, they all support the arrests of National Endowment for Democracy funded “activists”, in the first place, the Independent Republican Institute, the National Democratic Institute and Freedom House.

In a recent Gallup poll, 74 per cent of Egyptians called for an end to all foreign financing of NGOs and 71 per cent called for an end to all US aid. In a front-page caricature in Al-Akhbar, a seedy Uncle Sam points a Foreign Aid pistol to a confident young Egyptian who calls to his Dignity cannon, “Let’s defend ourselves.” Apparently Egyptians have had enough of US political coaching.

Eric Walberg writes for Al-Ahram Weekly http://weekly.ahram.org.eg/   You can reach him at http://ericwalberg.com/   His Postmodern Imperialism: Geopolitics and the Great Games is available at http://claritypress.com/Walberg.html

A Great Book About the Great Games 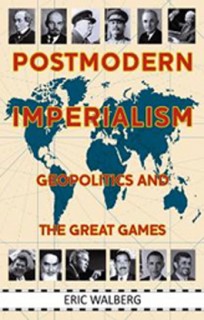