Home Veterans Beware The False Signs Of Spring In America 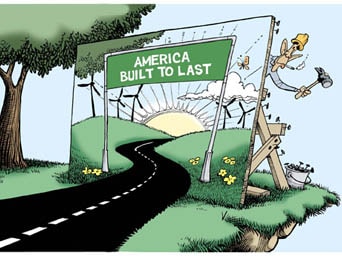 As the manic huckster Barack Obama travels the country raising almost 30 million a month for his re-election while campaigning on an old and badly tattered theme of hope and change that is just over the hill ~ millions of economically distressed Americans are saying “Are you kidding me“ and are rightfully refusing to be Obamanized: 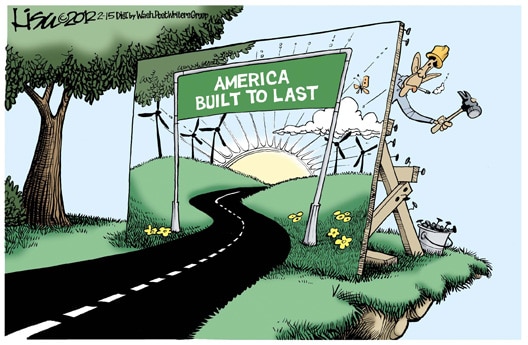 President Obama is in full campaign mode and his annoying high pitched daily entreaties to voters that recovery is just around the corner ( if you’ll just spend and re-inflate the debt bubble that burst four years ago) are falling on millions of deaf ears ~ except his true base, Wall Street and the global corporate elite. Here’s a great example in the form of a five minute video from just a normal American guy, who is part owner of a small business ~ commenting on the clowns, including the president, who are running this political circus and are messing this country up. Video: Are You Kidding Me

As we speak, every possible thing will be done by the Obama administration to post a cheery spring like picture or billboard that America is rising from the dead and is built to last despite the economic cliff that lays directly ahead.

Please note that Barack Obama was the ultimate Manchurian candidate ~ selected and elected by Wall Street and the global elite for these three reasons; Maintain the status quo, Don’t punish Wall Street for their excesses of power and greed and finally Maintain the military empire and sweep the Cheney/Bush abuses of power under the rug ~ if not utilize them himself.

Obama’s primary failure, to millions of Americans, was to advertise himself as an agent of hope and change and then promptly, upon election, reveal his true allegiance to the corporate elite and literally break everyone of his campaign promises. As such, his new promises sound vaguely hollow and false and are largely falling on deaf ears ~ once bitten, twice shy.

As Bill Finch writes, regarding false springs in the plant world ~

In short, this is a false spring. And the longer this false spring lasts, the more likely it is that even the mildest of frosts will do severe damage.

Plants have to get ready for cold. They have to make all sorts of interior preparations ~ battening down the hatches, so to speak ~ before winter comes. They essentially create antifreeze, converting easily frozen carbohydrates in their stems to freeze-resistant sugars, and they quit producing the kind of young, tender growth that will be most vulnerable to spring. But as this warm spell continues, plants aren’t battening down the hatches, they’re throwing them wide open, and putting on flowers and new growth like summer was just around the corner… . Sorry for ruining your false spring. But there’s good reason for recognizing it for what it is. You can’t change the weather patterns that have gotten us here, but you can do a little to keep your plants from over-reacting. Plants are confused already, so don’t make things worse.”

Regarding the current Obama perpetrated economic false spring ~ look no further than the real ( unreported) unemployment rate of close to 12%, the foreclosure abuse that is still running rampant across the United States ~ where here in San Francisco the audit of almost 400 foreclosures in San Francisco found that 84 percent of them appeared to be illegal, according to the study released by SF on Wednesday. Report:

In short this is a politically motivated false economic spring ~ with the obvious objective of reelecting Barack Obama.  According to the Federal Reserve, median household debt in America has risen to $75,600.  Many Americans have spent decades caught in the trap of debt slavery and large numbers of them never even escape ~ so how can an economic recovery sustain itself when the vast majority of Americans are still deeply in debt. Consumer borrowing rose by another $19.3 billion in December.  Right now it is sitting at a grand total of $2.5 trillion according to the Federal Reserve. Overall, consumer debt in America has increased by a whopping 1700% since 1971~ so people are obviously using their credit cards to survive and what will happen when that bubble bursts?

So the longer this false economic spring lasts, the more likely it is that even the mildest of economic frosts will do severe damage to an already badly chastened Main Street. Much of the interior preparations ~ battening down the hatches, so to speak ~ downsizing and cleaning house has not been done during this economic winter and the Administration, Wall Street and millions of Americans remain in economic denial ~ as we watch our civil liberties slowly become dead weeds in a barren wasteland.

One person seems to have a handle on Battlefield America and that is Gerald Celente of the Trends Research Institute ~ who has been right far more than wrong for the past several years and now lives in France. Here’s his recent 12 minute interview on RT where Celente declares that Obama blew his only chance for true change in 2009; that the U.S financial system is rapidly collapsing with the eventual possibility of economic martial law; that 2012 will bring to a head the will of the people versus the will of the government ~ and that the only true wild card in the 2012 presidential race is Ron Paul.  12 Minute Video:

What if America does not really need more of Obama’s feigned optimism and his cheerful false signs of spring but instead a heavy dose of reality from truth tellers like Judge Napolitano ~ who went from favorite to fired in 5 minutes on Fox TV ~ after airing these self evident truths. 5 Minute Video:

I rest my case ~ it’s still winter in America and spring will not appear until we refuse to be Obamanized and look for and willingly accept the winter rains of truth on the frozen soil of America’s battered psyche and wounded soul.

“What the people want is very simple – they want an America as good as its promise.”  Barbara Jordan