Home Veterans From Belfast to Palestine 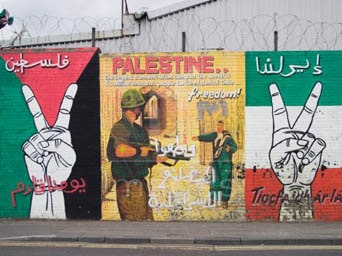 David Rovics sings of connections between Khader Adnan’s current hunger strike to the IRA hunger strikes of 1981, “As, no doubt, the Israeli occupation of Palestine is more than a little reminiscent of the British occupation of Ireland, most particularly during the Troubles.”

On January 5, 2006, while in Ramallah I went to the Headquarters of ADAMEER [Arabic for conscience] and met with spokesmen, Ala Jaradat a slightly built man who delivered a powerful message in a soft spoken voice:

“Most of these arrests occur after midnight when large numbers of IDF storm into neighborhoods or refugee camps, horrifying everyone and arresting anyone 14 years or older. Sometimes they storm into business offices and arrest the breadwinners of the families without any charges.

“These arrests and detentions are based on military orders; we live under a kind of Marshall Law which rules every aspect of Palestinian life: where we live, our license plates that restrict our movement and limited voting rights. Under these military orders the Israeli government is free to hold anyone eight days without accusations or charges. They can hold anyone up to 180 days for interrogation and up to 60 days without benefit of a lawyer.

“The Israeli government never agreed to the Second Geneva Convention, the Knesset never ratified it, and when it comes to the Occupied Territories they totally ignore it. Israel is the only State that approved torture of detainees. I know there are dictators who use torture, but Israel is the only State that supported torture until 1999. That is when International, Israeli and Palestinian pressure groups forced the issue and Barack was confronted about it when he visited the United States.

“The IDF will round up and arrest family members and use threats against their relatives to force confessions. The interrogations lead to Military Trials which is theoretically like court with three Judges presiding but only one is required to have an education and a law degree is not at all necessary. The Military Commander appoints the translators, issues all orders, assigns the judges, and has total control. One appeal is allowed, but if the judges are settlers the Palestinian is in deep shit!

“Administrative Detentions are issued by the Military Commander for a period of six months and the reason is always labeled ‘Security’ and the charges can be renewed indefinitely. One Palestinian spent eight years under Administrative detention and hundreds have endured four or more years. Today fifty are being held for the past four years. They may be released for a day or two and then they are rearrested because they are social or political activists but reasons are not given by the Israeli government.
“At any given moment 10% of those in prison are under Administrative Detention. There are currently 8,000 prisoners and 800 of them are under Administrative Detention. The government does not have to inform anyone about these arrests except the Red Cross and only if they are imprisoned over two weeks, but most arrests go unreported.

“Any Palestinian under the age of 16 is tried as an adult, but for an Israeli Jew it is 18 years of age. Under 12 years old the child can be arrested but not detained. Over 12 they can be arrested, detained, interrogated, prosecuted and sentenced for throwing stones.

“Most of the Israeli Jews that are imprisoned are in for violent crimes against society and they are mixed in with the Palestinian population. The guards encourage them to do what ever they want to do against the Palestinian population. This is an open invitation by the Israeli government to incite violence and terror in the prison system. We have sworn affidavits from Palestinians claiming it was the guards who encouraged the violence inflicted upon them.

“In August 2004 the Palestinians went on a hunger strike to raise awareness of this problem and the Minister of Health who is responsible for them stated publicly: ‘Our hospitals are off limits to them They can all starve themselves to death.’ “No human rights organizations are allowed access to the prisoners. Only lawyers and the Red Cross can visit them but have no access to the facilities where they are detained.

“The methods and photos from Abu Grahib and Guantanamo were no shock to any Palestinian who had been in prison between 1967 and the ‘80’s. All the methods used in Abu Grahib were normal procedures against Palestinians. In 1999 Internationals, Palestinians and Israelis for human rights threatened a boycott against Israel and that is what forced the Supreme Court to address the torture issue. They did not ban torture and the General Prosecutor can choose not to prosecute those who still use it.”- MEMOIRS of a Nice Irish-American ‘Girl’s’ Life in Occupied Territory