Home WarZone What Nasty Surprises Await Our Warmongers In The Gulf? 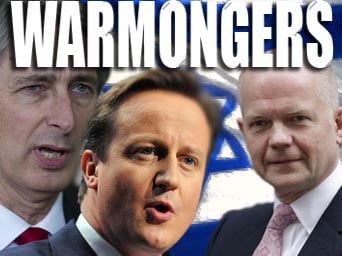 If Hague, Hammond and Cameron love Israel so much let them and the regime’s other admirers don uniform and flak-jacket and go play battleships in the Gulf’s “bathtub” themselves.

Who in their right mind would volunteer to be that trio’s cannon-fodder?

For example, according to Russ Winter of The Wall Street Examiner The ‘Sunburn’ – Capable and Versatile Hormuz Weapon , Iran’s Sunburn missiles, acquired from Russia and China over the last 10 years, have the capability of creating “a world of hurt” for the US Navy’s 5th Fleet.

“The Sunburn is perhaps the most lethal anti-ship missile in the world, designed to fly as low as 9 feet above ground/water at more than 1,500 miles per hour (mach 2+). The missile uses a violent pop-up maneuver for its terminal approach to throw off Phalanx and other US anti-missile defense systems. Given their low cost, they’re perfectly suited for close quarter naval conflict in the bathtub-like Persian Gulf.”

With its 90-mile range, the Sunburn can be fired from practically any platform, including a flat bed truck, and could hit a ship in the Strait in less than a minute.

Mark Gaffney The Sunburn – Iran’s Awesome
Nuclear Anti-Ship Missile adds this warning: “The US Navy has never faced anything in combat as formidable as the Sunburn missile.”

He mentions the even more-advanced SS-NX-26 Yakhonts missiles, also Russian-made (speed: Mach 2.9; range: 180 miles) deployed by the Iranians along the Gulf’s northern shore.

“Every US ship will be exposed and vulnerable. When the Iranians spring the trap, the entire lake will become a killing field…

“In the Gulf’s shallow and confined waters evasive manoeuvres will be difficult, at best, and escape impossible. Even if US planes control of the skies over the battlefield, the sailors caught in the net below will be hard-pressed to survive. The Gulf will run red with American blood.”

As both writers point out, the Iranians will have mapped every firing angle along their Gulf coastline. And the rugged terrain will not make detection easy.

“Shooting fish in a barrel”… but who are the fish this time?

Britain recently announced the deployment of HMS Daring, a new Type 45 destroyer, to the Gulf in order to send a significant message to the Iranians because of the firepower and world-beating technology carried by this warship. A Daily Telegraph report says she has been fitted with new technology that will give it the ability to “shoot down any missile in Iran’s armoury. The £1 billion destroyer… also carries the world’s most sophisticated naval radar, capable of tracking multiple incoming threats from missiles to fighter jets.” Her 48 Sea Vipers can shoot down fighters as well as sea skimming missiles.

Apart from HMS Daring, Britain is believed to have at least 3 other vessels in the Persian Gulf, and more can be sent. Are they all equipped with the same world-beating technology?

“Both America and Israel are unfortunately just not ready to wage the type of warfare they prefer to wage and at which they so excel: shooting fish in a barrel. Unlike Iraq, which the warmonger neoconservatives told us would be a  ‘cakewalk’ — easily conquered in six weeks — Iran is unlikely to offer its American and Israeli antagonists easy opportunities to indulge in their fish-in-a-barrel fantasies.”

The spectacle of the world’s school-yard bully, the United States, flanked by hooligan helpmates Britain, France and Canada all menacing Iran is building up to a chilling climax. If what I’m reading is correct, British ships in the bathtub of the Persian Gulf will be among the fish in the barrel on this occasion, with Iran doing the shooting. Britain’s chief hooligans, Hague and Cameron, could be courting disaster for the much-vaunted HMS Daring. Why are they getting us involved anyway? It’s obviously not for Britain, whose best interests are served by making friends and doing business with Iran.

No, they suffer the same delusions as their erstwhile partner in crime, the disgraced former Defence Secretary Liam Fox and the many others in our Parliamentary establishment who have swallowed the daft idea that Israel’s enemies are Britain’s enemies. How much sense can you expect from people who are signed-up Friends of Israel – in Hague’s case since the tender age of 15?

As the whole world surely knows by now the US-British track record in Iran doesn’t bear examination. And when they get on their high horse and spout about democracy everyone falls about laughing.

Who overthrew Iran’s fledgling democracy in 1953? Who trashed Palestine’s democracy in 2006? Who keeps banging on about Israel being the “only democracy in the Middle East” when, actually, it’s a racist ethnocracy?

For over 30 years Britain has had no high-level diplomatic contact with Iran except for Jack Straw’s visits a decade ago. Hague won’t answer questions about the diplomatic efforts he has made, if any. In a fit of lunacy he shut down the embassy in Tehran last year and chucked the Iranians out of London, and he’s now straining at the bit to get our young men needlessly embroiled in what is essentially a nuke-bristling US/Israel quarrel with non-nuke Iran… the ulterior motive and ultimate prize being Iran’s oil.

The US hasn’t had a proper embassy in Tehran since 1979. But a few months ago it set up a virtual embassy with this sick-making address to the Iranian people iran.usembassy.gov :

“We have created Virtual Embassy Tehran to offer you another perspective and another source of information, so you can make up your own minds about the US, our concerns about the Iranian government’s activities at home and abroad, and our serious efforts to achieve a resolution to those concerns.

“This website is not a formal diplomatic mission, nor does it represent or describe a real US Embassy accredited to the Iranian Government.  But, in the absence of direct contact, it can work as a bridge between the American and Iranian people.  As President Obama said earlier this year and Secretary Clinton affirmed in her recent VOA and BBC appearances, ‘You – the young people of Iran – carry within you both the ancient greatness of Persian civilization, and the power to forge a country that is responsive to your aspirations. Your talent, your hopes, and your choices will shape the future of Iran, and help light the world.   And though times may seem dark, I want you to know that I am with you.’

“It is in that spirit that we launch our Virtual US Embassy Tehran.  It is our Mission to the Iranian people.”

Yeah. A US mission that’s accompanied by vicious sanctions imposed with the help of gullible friends like Britain and the EU and calculated to cripple Iran’s economy and make the lives of its young people hell. The consequences for us are damaging too.

Britain’s defence chief Philip Hammond, who replaced Fox after the scandal that exposed his ‘special friend’ Adam Werritty and behind-scenes plotting with Israel against Iran, has publicly warned Iran that any blockade of the Strait of Hormuz would be “illegal and unsuccessful”.

But why escalate matters to the point where a blockade becomes likely?

And why, asks Dr Darkmoon, do it for Israel anyway?

“Cui bono? Iran has much more to offer America than Israel does.

“Iran has oil in abundance, Israel has none. Iran does not hold America’s political class to ransom. Iran does not try to browbeat successive American administrations into putting Iranian interests before American ones. Iran’s dual citizens do not spy on America or sell American military secrets to Russia and China—there are no Iranian Rosenbergs or Jonathan Pollards. Iran does not coerce Americans into fighting and dying for it in foreign wars. Iran does not expect $3 billion a year in handouts, and even more in loan guarantees that never get repaid.

“Iran would be a far greater asset to America than Israel could ever be. Israel is a liability and a burden.

“More fool America for cuddling up to a ‘friend’ who has stabbed it in the back in the past — the Lavon affair, the USS Liberty incident, the Jonathan Pollard betrayal — and is more than likely to stab it in the back again at some time in the foreseeable future.

“Dump Israel. That’s my advice. Before Israel sets the world on fire, taking America with it.”

The question certainly needs to be asked, she says.

“What hold does Israel have over America? Is America prepared to sustain immense damage to its vital interests on behalf of an unstable and insolent ally that remains, if numerous polls are to be believed, the world’s most hated nation?”

Ask it here too. What hold does Israel have over Britain? The only people impressed by Israel are MPs and ministers whom the pro-Israel lobby has ‘groomed’ and funded, the Jewish community (though by no means all of them) and a rabble of Christian Zionists. No-one else.

And no-one else wants to fight Israel’s unjust wars or help America do Israel’s dirty work.

So if Hague, Hammond and Cameron love Israel so much let them and the regime’s other admirers don uniform and flak-jacket and go play battleships in the Gulf’s “bathtub” themselves. Who in their right mind would volunteer to be that trio’s cannon-fodder?