Home Government Obama, AIPAC and the Rest of US 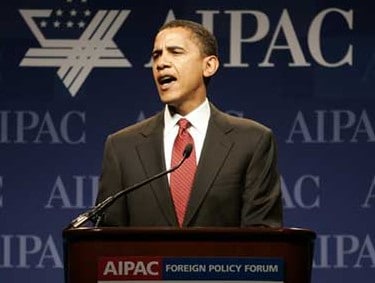 Why Does America Prostrate Itself  Before the AIPAC Bullies?

Yesterday at AIPAC annual conference, the American president had to go out of his way to appease his Jewish crowd. He used every trick in the book, he even peppered his talk with some Yiddish sporadic words and he did it all just to justify his decision not to launch a World War as yet.

One should ask, how come a lobby of a small state that practices the most appalling racist expansionist politics and practices has managed to gain so much political power in the USA.

As it happens, more and more academics and political commentators indeed ask themselves the exact question – they wonder what is it in American culture and political system that allowed it to happen?

I am also interested in a very similar quest. I actually try to identify the different elements within Jewish culture and identity politics that have led to the rise of AIAPC into the dominant force within American politics and foreign policy.

In my latest book, The Wandering Who, a book that both Zionist and  Jewish Anti Zionist Zionists (JAZZ) are desperate to stop, I explore those themes.

I for instance, elaborate on the significant role of the ‘Book of Esther’, in shaping Jewish Lobbing in the West and beyond. The Book of Ester is an Old Testament text that preaches lobby culture and  tribal infiltration into foreign administrations.

I also explore the Exilic nature of Judaism. I maintain that Judaism, as we know it, was founded in Babylon in conditions that, from Jewish perspectives, were very similar to 19th century Europe and the birth moment of Zionism.

In both cases it was the fear of assimilation that led towards the invention of an isolationist and separatist cult.

Seemingly the exilic nature of Judaism transcended itself into Jewish secular and nationalist politics rather than being concerned with the ‘here and now’.

The Diaspora Zionist Jew explores his or her aspiration towards a different place and different time i.e. Zion.

Unlike other migrant lobbies in the West that are engaged in issues to do with the interests of their respective migrant communities (in terms of social rights, religious freedom, education and so on), the Jewish Lobby is actually solely concerned with the interest of a remote state and a remote community.

This fact alone, explains the uniqueness of AIPAC. It also means that it is unlikely that any other political lobby would ever compete successfully with AIPAC except another Jewish Lobby.

Yet one may wonder whether AIPAC’s hegemony over American foreign policy is ‘good for the Jews’. In fact, more than a few commentators including myself are convinced that that it is actually a total disaster.

In fact Jewish history is saturated with similar occurrences in which Jewish elite’s overwhelming influence led to the birth of rapid growing of anti – Jewish sentiment.

Israeli historian Shlomo Sand points out that in between the 1st and early 19th century Jews didn’t engage in writing history. Not a single Jewish historical text saw daylight in that period.

According to Sand, the Rabbinical Jew didn’t need history text. The Bible provided a sufficient explanation. The meaning of it is clear, there is an element of Jewish cultural denial to historical thinking.

Such an interpretation  may help us to grasp the surprising fact that Jewish communities in the West are not at all alarmed by the growing influence of the Jewish lobbies in West and AIPAC or CFI in particular.

This is far from being new.  Jewish history is saturated with attempts to shoot the messengers and whistle blowers: Jesus found himself nailed to the wood, Spinoza was excommunicated, Bernard Lazare was largely ignored, Otto Weininger was dismissed, Mordechai Vanunu is locked behind bars again and as my followers know, I am also chased by the like of Alan Dershowitz, and the Jewish Anti Zionist Zionists (JAZZ).

Like many other commentators on Middle East current affairs, I also don’t have any doubt that we are facing a volatile situation. Considering its influence and its open advocacy to attack on Iran, AIPAC is a grave threat to world peace.

It openly pushes for another war that can easily escalate into a nuclear global conflict. AIPAC clearly endangers American interests and American people but it is also very dangerous for Jewish communities all over the world.

If America loves itself and cares for its future, it must immediately find within itself the means to dismantle the power of this lobby. America owes it to its people, to world peace but also to its Jews who largely have nothing to do with this appalling warmongering genocidal campaign.