Home Government Truth Willing Out – The Slimy March of Zionism Well Told by... 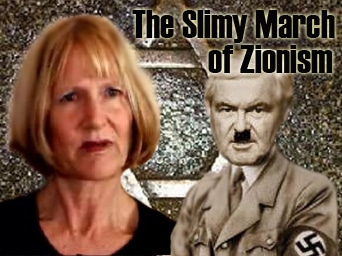 When idiot blowhard Newt Gingrich kissed up to AIPAC during one of those overly hyped television debates by proclaiming; ”Palestinians are a made-up people,” He lit a firestorm of indignation that appears to have made some waves of forbidden truth over the Internet.

Thanks to Newt’s whorish devotion, more Americans are availing themselves of the facts beneath the fanatical hubris that is Judaic Zionism. After his obnoxious public statement, Gingrich motivated millions to look into the forbidden issue and debate it—exactly what his masters do not want.

To verify this claim about Newt generating reaction, it was in the bickering letters section of a daily newspaper, a bastion of Neocons, duffers and oxymorons, that a reference to Alison Weir’s report was made. It was a letter that somehow got past the gatekeeper, suggesting the facts could be found here to refute the barrage of pro Israeli letters.

Now, anyone who wants the facts may do so by reading “The History of US-Israel relations” for free on the Internet—And, it is most convincing.

Today we know how powerful the Jewish lobby is, this report tells how it got that way despite heroic and intelligent opposition.

The report carefully documents how the crafty Zionists used the fearsome allegation of anti-Semite, and financial skills to control the press, the school curricula, and all modern media, so that the opposition from patriotic American State department and military commands was surreptitiously overridden by money to politicians.

Her work with the group Jews for Justice in the Middle East became so effective that back in 2003 the Jewish Defense league thugs threatened to bomb her headquarters just as they had done to the original Institute for Historical review in Torrance, CA, on the 4th of July, 1984.

Alison’s debating rhetoric illustrates the sharp edges of her campaign, for instance, the following:

“…What about the famous slogan, ‘A land without people for a people without land?” This was, it turns out, one of the most cruelly calculated examples of fallacious advertising the world has known.

“Let me quote a less famous statement by the author of that shining slogan, Israel Zangwel—this one a bit different:

“[We] must be prepared either to drive out by the sword thetribes in possession as our forefathers did or to grapple with the problem of a large alien population….” (1905)

Going back into America’s roaring past, we learn about a powerful secret fraternity at Harvard that apparently makes Yale’s well known Skull & Bones look like kid’s stuff.

Justice Louis Brandeis, who had a major leadership role in World Zionism, established a secret fraternity within Harvard’s Menorrah Society called Parushim, which is Hebrew for Pharisees. The oath taken by initiates is chilling, especially when you know these men leave Harvard to take power positions throughout society.

“You are about to take a step which will bind you to a single cause all your life. You will for one year be subject to an absolute duty whose call you will be impelled to heed at any time, in any place, and at any cost. And ever after, until our purpose shall be accomplished, you will be fellow of a brotherhood whose bond you will regard as greater than any in your life dearer than that of family, of school, of nation.”

The Yale Skull & bones bunch is talked about all the time, but had you heard about this bunch? The Parushim are taught that to be open about their goals would be”suicidal”—They must work silently through education and ‘infection’.

This report outlines the persistent patience of the Zionist movement that from the outset in Europe had access to unmatched finance to feed their unmatched fanaticism and secretive cunning nourished by thousands of years of powerful tradition. Shrouded by lies about the mistreatment of Jews during all of Western history and coated with a created, meaningless term—anti-Semitism.

This treatise covers the political and cultural takeover, leaving the dastardly religious side of this colossal war for mankind’s soul, up to others such as Charles Carlson. (WHTT. Org) I recommend his DVD: Christian Zionism, The Tragedy and The Turning.)

The pressures brought to bear on the Western Powers to force the colony called Israel onto the natives of Palestine (which didn’t exist according to Gingrich) is very clearly told by Ms. Weir,

The subtle but heartless methods used by upper crust Jews to sacrifice the lowly ordinary haaretz to the orchestrated “persecutions” by European powers in order to force migration to Arab Palestine is laid out in this report.

As the 1920s roared to a close, in the US the ‘Bergson Group’ of the Irgun Delegation organized a march of 500 Rabbis on Washington DC and “placed full page ads in newspapers around the US, and produced a pageant ‘We Will Never Die’ celebrating the Jewish contribution to Western Civilization, written by Ben Hecht, directed by Moss Hart, featuring music by Kurt Weil, and starring Edward G. Robinson.”

Weir points out that: “While the various organizations created by the Irgun Delegation frequently pushed for rescuing European Jews, one of the major demands was for the creation of a ‘Jewish army of stateless and Palestinian Jews’ This was a goal that revisionist Zionists had sought even before the Nazi holocaust had begun and is believed to have had a mixed agenda…”

Quoting author William Rubenstein, the report continues: “It is rather difficult to believe that Bergson’s implausible proposal did not have far more to do with creating the nucleus of a Jewish Palestinian force to be used against the British and the Arabs, than with saving Europe’s Jews…”

“…The delegation did not manage to rescue any Jews from the Nazis.”

The most telling anecdote, which I had never heard previously, is the tale of Hugh Gibson, nominated to be ambassador to Poland in 1919. “After he arrived in Poland, he began to report that there were far fewer anti-Semitic incidents than being alleged. He wrote his mother: ‘These yarns are exclusively of foreign manufacture for anti-Polish purposes.’

“His dispatches came to the attention of Brandeis and his protégé Felix Frankfurter, who demanded a meeting with Gibson. Gibson later wrote of their accusations:

“I had [Brandeis and Frankfurter claimed] done more mischief to the Jewish race than anyone who had lived in the last century.

They said that my reports on the Jewish question had gone around the world and had undone their work…They finally said that I had stated that the stories of excesses against the Jews were exaggerated, to which I replied that they certainly were and I should think any Jew would be glad to know it.

“Frankfurter hinted that if Gibson continued these reports, Zionists would block his confirmation by the Senate.

“Gibson was outraged and sent a 21-page letter to the State Department. In it he shared his suspicions that this was a part of a ‘conscienceless and cold-blooded plan to make the condition of the Polish Jews so bad that they must turn to Zionism for relief.’

“It is common knowledge that Zionists are continually and constantly spreading propaganda of political and religious persecution through their agencies over the entire world,’ adding ‘the Jew in business oppresses the Pole to a far greater extent than does the Pole suppress the Jew in a political way.”

When this report documents the vicious Israeli Zionist behavior in 1948 after their mandate was established by the United Nations and Harry Truman, I find it difficult to write of the atrocities at Deir Yassin village.

Your stomach will turn as you read about the brutality of the Irgun and Stern gang thugs assault on the tiny village; an eyewitness, and future colonel in the Israeli army recalled:

“They didn’t know how to fight, but as murderers they were pretty good.”

When they began the wanton killing, the Israelis reverted to the mentality of the dubious Old Testament stories about taking the promised land.

There is much, much more in this documented report that I urge everyone to read and circulate to help overcome the ignorance of the blackout.