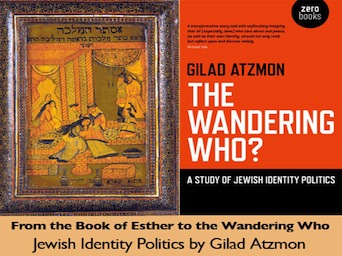 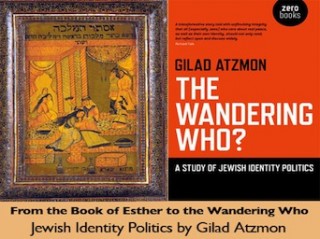 The Biblical Book of Esther that was given to President Obama by Israeli PM Benjamin Netanyahu yesterday was far from being a cryptic message. The Book of Esther is a genocidal recipe. It is there to educate Jews how to infiltrate into foreign administrations. In my latest book The Wandering Who I explore the role of The Biblical text in shaping contemporary Jewish political Lobbying and its open attempt to dominate American and British foreign policies.

In contemporary American politics we detect the following.

The Book of Esther (The Wandering Who? by Gilad Atzmon, Chapter 19)

‘Haman said to King Achashvairosh, “There is a nation scattered and separated among the nations [the Jews] throughout your empire. Their laws are different than everyone else’s, they do not obey the king’s laws, and it does not pay for the king to tolerate their existence. If it pleases the king, let a law be written that they be destroyed, and I will pay to the executors ten thousand silver Kikar-coins for the king’s treasury.”’ (The Book Of Esther, Chapter 3)

The Book of Esther is a biblical story that forms the basis for the celebration of Purim, probably the most joyously celebrated Jewish festival. The book tells of an attempted Judeocide, but also of Jews who manage to change their fate. In the Book of Esther, the Jews rescue themselves, and even get to mete out revenge.

It is set in the third year of the reign of the Persian king Ahasuerus (commonly identified with Xerxes I). It is a story of a palace, a conspiracy, the aforementioned attempted Judeocide and a brave and beautiful Jewish queen – Esther – who manages to save her people at the very last minute.

Ahasuerus is married to Vashti, whom he repudiates after she rejects his command to show herself off to his assembled guests during a feast. Esther is selected from amongst many candidates to be Ahasuerus’s new bride. As the story progresses, Ahasuerus’s prime minister, Haman, plots to have all the Jews in the Persian empire killed in revenge for a refusal by Esther’s cousin Mordechai to bow to him in respect. Esther, now queen, plots with Mordechai to save the day for the Persian Jews. At the risk of endangering her own safety, Esther warns Ahasuerus of Haman’s murderous anti-Jewish plot. (As she had not disclosed her Jewish origins beforehand, the king had been unaware of them.) Haman and his sons are hanged on the fifty-cubit-high gallows he had originally built for Mordecai. As it happens, Mordecai takes Haman’s place as prime minister. Ahasuerus’s edict decreeing the murder of the Jews cannot be rescinded, so he issues another one allowing the Jews to take up arms and kill their enemies – which they do.

The moral of the story is clear. If Jews want to survive, they had better infiltrate the corridors of power. In light of The Book of Esther, Mordechai and Purim, AIPAC and the notion of ‘Jewish power’ appears to be an embodiment of a deep Biblical and cultural ideology.

However, here is the interesting twist. Though the story is presented as a record of actual events, the historical accuracy of the Book of Esther is in fact largely disputed by most modern Bible scholars. The lack of clear corroboration for any of the book’s details with what is known of Persian history from classical sources has led scholars to conclude that the story is mostly or even totally fictional. In other words, the moral notwithstanding, the attempted genocide is fictional. Seemingly, the Book of Esther encourages its (Jewish) followers into collective Pre-TSS, making a fantasy of ‘destruction’ into an ‘ideology of survival’.  Indeed, some read the story as an allegory of quintessentially assimilated Jews, who discover that they are targets of anti-Semitism, but who are also in a position to save themselves and their fellow Jews.

Reading the Haman quotes above, while keeping Bowman in mind, the Book of Esther shapes an exilic identity. It sews existential stress and is a prelude to the Holocaust religion, setting the conditions that turn the Holocaust into reality.  Interestingly a very similar, threatening narrative is explored in the beginning of Exodus. Again, in order to set an atmosphere of a ‘Shoah to come’ and a liberation to follow, an existential fear is established:

‘Now there arose a new king over Egypt, who knew not Joseph. And he said unto his people, “Behold, the people of the children of Israel are too many and too mighty for us; come, let us deal wisely with them, lest they multiply, and it come to pass, that, when there befalleth us any war, they also join themselves unto our enemies, and fight against us, and get them up out of the land.” Therefore they did set over them taskmasters to afflict them with their burdens. And they built for Pharaoh store-cities, Pithom and Raamses.’ Exodus 8-11

Both in Exodus and The Book of Esther, the author of the text manages to predict the kind of accusations that would be leveled against Jews for centuries to come, such as power-seeking, tribalism and treachery.  Shockingly, the text in Exodus evokes a prophesy of the Nazi Holocaust. It depicts a reality of ethnic cleansing, economic oppressive measures that eventually lead to slave labour camps (Pithom and Raamses). Yet, in both Exodus and the Book of Esther it is the Jews who eventually kill.

From Purim to Washington

In an article titled ‘A Purim Lesson: Lobbying Against Genocide, Then and Now’, Dr Rafael Medoff expounds on what he regards as the lesson bequeathed to the Jews by Esther and Mordechai: the art of lobbying. ‘The holiday of Purim,’ Medoff says, ‘celebrates the successful effort by prominent Jews in the capitol [sic] of ancient Persia to prevent genocide against the Jewish people.’[1] This specific exercise of what some call ‘Jewish power’ (though Medoff does not use this phrase) has been carried forward, and is performed by modern emancipated Jews: ‘What is not well known is that a comparable lobbying effort took place in modern times – in Washington, D.C., at the peak of the Holocaust.’[2]

Medoff explores the similarities between Esther’s lobbying in Persia and her modern counterparts lobbying inside FDR’s administration at the height of the Second World War: ‘The Esther in 1940s Washington was Henry Morgenthau Jr., a wealthy, assimilated Jew of German descent who (as his son later put it) was anxious to be regarded as ‘one hundred percent American.’ Downplaying his Jewish-ness, Morgenthau gradually rose from being FDR’s friend and adviser to his Treasury Secretary.’[3]

Clearly, Medoff also spotted a modern Mordechai: ‘a young Zionist emissary from Jerusalem, Peter Bergson (real name: Hillel Kook) who led a series of protest campaigns to bring about U.S. rescue of Jews from Hitler. The Bergson group’s newspaper ads and public rallies roused public awareness of the Holocaust – particularly when it organized over 400 rabbis to march to the front gate of the White House just before Yom Kippur in 1943.’[4]

Medoff’s reading of the Book of Esther provides a glaring insight into the internal codes of Jewish collective survival dynamics, in which the assimilated (Esther) and the observant (Mordechai) join forces with Jewish interests on their minds. According to Medoff, the parallels to modern times are striking: ‘Mordechai’s pressure finally convinced Esther to go to the king; the pressure of Morgenthau’s aides finally convinced him to go to the president, armed with a stinging 18-page report that they titled “Report to the Secretary on the Acquiescence of This Government in the Murder of the Jews.”  Esther’s lobbying succeeded. [Ahasuerus] cancelled the genocide decree and executed Haman and his henchmen. Morgenthau’s lobbying also succeeded. A Bergson-initiated Congressional resolution calling for U.S. rescue action quickly passed the Senate Foreign Relations Committee – enabling Morgenthau to tell FDR that “you have either got to move very fast, or the Congress of the United States will do it for you.” Ten months before election day, the last thing FDR wanted was an embarrassing public scandal over the refugee issue. Within days, Roosevelt did what the Congressional resolution sought – he issued an executive order creating the War Refugee Board, a U.S. government agency to rescue refugees from Hitler.’[5]

Doubtless Medoff sees the Book of Esther as a general guideline for a healthy Jewish conduct: ‘The claim that nothing could be done to help Europe’s Jews had been demolished by Jews who shook off their fears and spoke up for their people – in ancient Persia and in modern Washington.’ In other words, Jews can and should do for themselves. This is indeed the moral of the Book of Esther as well as of the Holocaust religion.

What Jews should do for themselves is indeed an open question. Different Jews have different ideas. The neoconservatives believe in dragging the US and the West into an endless war against Islam. Some Jews believe that Jews should actually position themselves at the forefront of the struggle against oppression and injustice. Indeed, Jewish empowerment is just one answer among many. Yet it is a very powerful one, and dangerous when the American Jewish Committee (AJC) and AIPAC act as modern-day Mordechais and publicly engage in an extensive lobbying efforts for war against Iran.

Both AIPAC and the AJC are inherently in line with the Hebrew Biblical school of thought. They follow their Biblical mentor, Mordechai.  However, while the Mordechais are relatively easy to spot, the Esthers – those who act for Israel behind the scenes – are slightly more difficult to track.

Once we learn to consider Israeli lobbying within the parameters drawn by the Book of Esther and the Holocaust religion, we are then entitled to regard Mahmoud Ahmadinejad as the current Haman/Hitler figure. In addition to the AJC and AIPAC, President Obama’s Chief of Staff Rahm Emanuel and Lord Levy are also Mordechais, Obama is obviously Ahasuerus, yet Esther can be almost anyone, from the last Neocon to Dick Cheney and beyond.

[1] Medoff, Rafael, ‘A Purim Lesson: Lobbying Against Genocide, Then and Now’; see http://www.wymaninstitute.org/articles/2004-03-purim.php