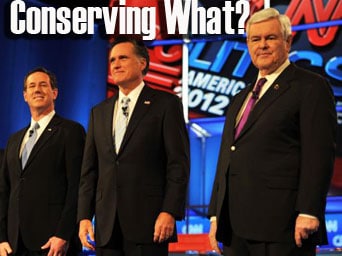 If America is an example of how “civilized people” select their leadership, I prefer pygmies, aboriginal blues and headhunters in the Amazon, who have been smart enough to avoid our modern two-party political system.

This column was difficult to write because it aint easy to type while running in circles, pulling out hairs and screeching about stupid people.

I do not apologize for disorganization in this column because the point will be clear to VT readers.

Here is a simple quiz to give to college students, professors, brokers and Mrs. Banana at the check out counter:

Can you identify the brainwash stroke in this paragraph? (taken off Al Jazeera):

“Moody’s downgrades Greece to lowest level: The credit agency becomes the second in one week to downgrade the country’s rating even after announced debt-swap deal.

If they do not catch the “even after” phrase. Ask if they supported Romney, Santorum or Newt , then ask; Since when did “swapping debt” become a good thing? Get it?

While the media, and most bloggers keep blasting the Putin election in Russia, check out the following manifesto published by one of Putin’s rivals: Edouard Limonov of the Bolshevik party: (extracted from a column written by Justin Raimondo of AntiWar.com.

“Boys and girls will be taught to shoot from grenade throwers, to jump from helicopters, to besiege villages and cities, to skin sheep and pigs, to cook good hot food and to write poetry. There will be sportive competitions, fighting, a free combat without rules, running, jumping…

“We will have to leave Russia, to build a nest on the fresh central lands, to conquer them there and to give rise to a new, unseen civilization of free warriors united in an armed community. Roaming the steppes and the mountains, fighting in southern nations.

(Sounds more than a little like a fanatic Zionist drooling over other people’s property, doesn’t it?)

“Many types of people will have to disappear. Alcoholic uncles Vasias, cops, functionaries and other defective material will die out, having lost their roots in society. The armed community could be called ‘Government of Eurasia.’ Thus the dreams of the Eurasians (Khazars) of the ’30s will be realized. Many people will want to join us. Possibly we will conquer the whole world. People will die young but it will be fun.”

I have Internet friends who have lived long as Americans who tell me they wish we had a Putin running here and now. Nevertheless, as Raimondo pointed out “the official Western narrative, is that Russia is slipping back into authoritarianism and Putin represents the reincarnation of Stalin.

“This contention is beyond absurd. In little more than two decades, the country has emerged from one of the most vicious and bloodthirsty dictatorships in world history, where millions perished in the gulag and a totalitarian ideology was the official doctrine of the state. Seen from this perspective, Russia’s progress toward an open society has been unprecedented: to hold Putin’s Russia to a standard not even the United States can live up to is Western hypocrisy at its most brazen.”

Then we have our Red, White and Blue media culture as expressed by a comment on the Daily Paul:

Whitney Houston’s death, while a sad thing, was the direct result of very unwise life choices. It dominates the news.

Charlie Sheen is 45 and his story is all over the news because he is a substance abuser, an adulterer, sexually promiscuous and obnoxious.

Lindsay Lohan is 24 and her story is all over the news because she is a celebrity drug addict and thief.

Something as frivolous as Kim Kardashian’s stupid wedding [and short-lived marriage] was shoved down our throats. Meanwhile,

Justin Allen 23, Brett Linley 29, Matthew Weikert 29, Justus Bartett 27, Dave Santos 21, Jesse Reed 26, Matthew Johnson 21, Zachary Fisher 24, Brandon King 23, Christopher Goeke 23 and Sheldon Tate 27…Are all Marines that gave their lives last month for you. There is no media for them; not even a mention of their names.

I admit that whenever I glance at the fare offered by the AOL Page that seizes the screen on my computer after I turn it on I shake my aged head in disbelief and sorrow for my fellow Americans.

And here is a new video to pass around Michael Rivero, an American with a brain