Home WarZone Afghanistan: De-Pashtunization of Pashtuns by Taliban and Pakistan 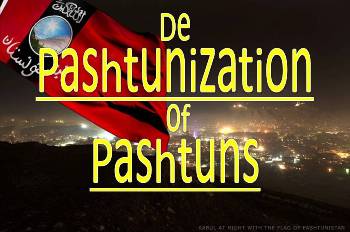 For more than a thousand years the Afghan nation, and Pashtun tribes in particular, have resisted all foreign efforts of domination. Efforts by great empires have failed to suppress rich Pashtun culture and traditions, created during ancient Silk Road trading, the Jirga, language, art, music, song, poetry, dance, sports, food, humor, hospitality, etc… What great empires have failed to do is now being attempted by a late-comer, mini and sham-empire — a collection of disjointed provinces known as Pakistan.

Pakistan, using its indoctrinated proxy Taliban, has insidiously and perniciously forced the greatest damage to the identity, society, culture, traditions and posterity, of the Pashtuns. On the pretext of “Jihad”, the Punjabi dominated Pakistani establishment has steadily reduced and de-Pashtunized the proud Pashtun community into pawns on the strategic chess-board.

Rephrasing, Pakistan is backing the Taliban not because they represent Pashtun nationalism but because they reject Pashtun nationalism; ever since the detachment of colonial overlords in the subcontinent, Pashtun culture has been an irritant factor to the Punjabi dominated Pakistani state. In the Pakistani scheme, anything that emphasizes Pashtun identity, culture, language, traditions must be suppressed or metamorphosed to serve the Punjab interests of Pakistan.

It is fear of a Pashtun awakening that the Pakistanis have kept the Pashtun Tribal belt as a regressive anthropological cattle ranch where the social, cultural, educational and political development of the people remains medieval while adjoining areas – the so called “settled areas” – show some semblance of modernity. Pakistanis justify their FATA “reservation” policy based on arrogant colonial British who portrayed the Pashtuns as free-spirited, noble savages who lived by their own code of ethics and tolerated no attempt to curb their autonomy, much less their independence. The natural consequence of letting FATA become the “wild west” of Pakistan is that it remains under developed, under-educated and under-represented, and unfortunately, women have suffered the worst; being treated no better than commodities.

With no economic development on the horizon, FATA transformed into a haven for criminals from all over Pakistan who sought refuge in this area and conducted their wicked trade — smuggling, gun-running, narcotics, extortion, kidnapping, car theft etc — with complete impunity.

By not allowing political parties to operate in FATA, the Pakistani establishment sought to depoliticize the region. The vacuum thus created was filled by the nexus between the mafia and the mullah, which suited the Pakistani establishment perfectly; it allowed the exploitation of the Pashtun tribesmen as cannon fodder for the various misadventures of the Pakistani state, starting with the “tribal invasion” of Jammu and Kashmir in 1947 and culminating with the rise of the Taliban in the 1990s.

Pakistan’s policies, tactics and strategies towards the Afghan Pashtuns have been nothing short of devastating and are characterized by Pakistan’s support for the Islamo-fascist Taliban; in post 9/11, Pakistan never changed course strategically in Afghanistan. In fact, after a two year recuperation time window, the Taliban regrouped after 9/11; then Pakistan unleashed them back into Afghanistan. Needles to say, the brunt of the Taliban resurgence in Afghanistan is felt in the Pashtun dominated areas in the South and East of the country. By directing the Taliban attacks on aid and development workers, the Pakistanis have ensured that the Pashtun belt lags behind other parts of Afghanistan where reconstruction activity has been taking place at a feverish pace.

The deprivation of the Pashtuns is a deliberate policy aimed at enhancing the sense of grievance and alienation among the Pashtuns and introduces a vicious cycle in which terror strikes on development activity has led to a halt in reconstruction work, which in turn impairs development of the Pashtun areas and results in growing anger among the people who feel they are being marginalized by the non-Pashtun dominated dispensation from Kabul. This anger is exploited by the Taliban to win support from local communities; which leads to a further deterioration in the security situation. The Taliban also work to ensure that all efforts at providing governance by Kabul in the Pashtun areas to fail. The direct impact of the relentless targeting of government officials is to render the administration dysfunctional and the resultant vacuum is filled by the Taliban; who set up their own shadow government for dispensing what they call justice and dispute settlement between members of local communities.

The destruction of schools and denial of education to girls has been an essential part of the war on the Pashtuns people. The only purpose for attacking schools is to deny future generations of Pashtuns even a small secular education that would equip them to walk in step with rest of the world. In the eyes of the Taliban, the Pashtun children need nothing more than grounding in a tough religious madrassa education. That said, madrassa educated Pashtuns who neither compete nor coexist with other ethnic groups is perhaps part of the calculus for denying Pashtun children a proper education.

At the political level, the Taliban guarantee the marginalization of the Pashtuns by coercing them into not participating in the elections. With many Pashtuns not casting their votes in the last Afghan parliamentary votes, candidates belonging to non-Pashtun ethnic groups managed to win even in Pashtun dominated areas. For instance, in Ghazni, the Hazaras managed to win most of the parliamentary seats because of the low voter turnout among the Pashtuns. Also, in the Afghan National Army and Police, all efforts to correct the ethnic imbalance by increasing the Pashtun representations has been blocked by the Taliban and their Pakistani backers who have threatened the Pashtuns with reprisals against their families and communities if they joined the forces.

The havoc wrought on the Pashtuns to push them into the dark ages and sully their image around the world by the Pakistani sponsored and supported Taliban, and the systematic infusion of radical Islamist ideology into the Pashtun areas, has made every Pashtun a suspect in the eyes of not only other ethnic groups in Afghanistan but also in the rest of the world.

Afghanistan’s Pashtun areas are seen today as zones of instability and epicenters of global terrorism, in fact, a clear sign that De-Pashtunization of Pashtuns is working.

Enough! It is time for this game to end. Pashtuns in Afghanistan, in the U.S. and around the world must now blow the whistle on false Pashtun from Pakistan. De-Pashtunization of Pashtuns for the benefit of Pakistan must be seen for what it is. It is poison propaganda to control the Pashtuns, to make the world see them only as the seeds of worldwide terrorism; and to convince them that only Pakistan can save them. This is totally unacceptable.